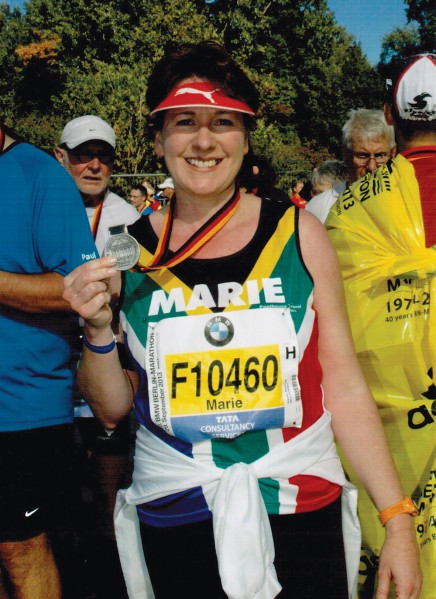 Balancing work and family with running can be a tricky situation for most, but thanks to her job, marathoner and sporting tours manager Marie Howarth also juggles regular overseas trips to exotic races. – BY RACHEL PIENAAR

Marie Howarth is a runner with a dream job. She works as the Sporting Tours Manager for Penthouse Travel, based in Cape Town, and gets to lead tour groups of runners to various overseas Big City Marathons and exotic races that the company has entries for, including the London, New York and Berlin Marathons. As a result, in between putting the tour packages together and looking after the tour groups while overseas, she gets to run these races herself, but she’s come a long way from her first tour to the UK in 2004.

“I was quite the couch potato when I took that London Marathon group over, and it was quite an eye-opener for me, because everyone just assumed that I was running. When I told them that I wasn’t running, they wanted to know why,” Says Marie. “Then when I looked at the marathon, I realised why, because you see all shapes, sizes and ages taking part. There is no specific type of runner, everyone was at different paces and fitness levels, and it showed me that anyone can run.”

THE LOVE AFFAIR BEGINS
That trip inspired Marie to start running, and soon after returning, she signed up to Durbanville Athletic Club. Four months later she ran her first race, and a year after her first trip to London, she was back, ready to take on her first marathon. Even though her running experience was still limited and that first marathon proved a bit of a painful experience, she still looks back on that run fondly.

“That first London Marathon was by far the best memory for me. I had only previously done just the one 21km, so in a way I went into the marathon blind. I think I did a really good time, but afterwards I was absolutely finished. I remember going back to the hotel room and falling asleep, but I hadn’t taken any painkillers or anti-inflammatory pills, because I didn’t realise you need to take them. I literally could not move, and I kept waking up every few seconds in agony!”

The next day we were due to leave, but I took about three hours to get out of bed and get dressed, because every time I moved it was so painful! By the time I got downstairs, there were quite a few clients waiting in the lobby to say goodbye to me – they all thought they’d see me at breakfast, but by the time I came down breakfast had long since passed, because I took so long to get going. I looked like I was in so much pain, and they asked what painkillers I had taken, but I just said, ‘No, I didn’t know I needed to do that!’ Everyone laughed because they thought it was so funny.”

Since that 2005 London Marathon, Marie has run multiple overseas marathons, including the Berlin and New York City Marathons. Back home, she also stepped up to the ultras and has run the Old Mutual Two Oceans Marathon three times (2008 to 2010, with a best of 6:38:14), and also completed the Comrades Marathon twice in 2008 and 2010, with a best of 11:15:35.

MAKING IT WORK
In a given year Marie normally takes tour groups overseas up to five times, while colleagues take other groups, and she manages to keep control of her life by staying well organised for each trip. “It’s a combination of extra work before and after the events, and I also organise and put plans in place for my children, because I am a single parent. While I am away, I am always conscious that although plans are in place, that circumstances can change.” she says.

In between the wonderful travel opportunities afforded by her job, Marie still holds down normal working hours at the travel agency, which means that she has to fit her training runs in around her work schedule while also allowing family time. That sees her training weekdays between 4am and 5am, and while she does a number of local races as well, she tries to dedicate her weekends to spending quality time with family and friends. In terms of making time to run, she says, “You just get on with it, don’t you? If it is something you are passionate about and it is something you want to do, you make a plan and prioritise your time. This job can be exhausting at times, but the benefits far outweigh the negatives. I love my clients, my job, my running and my family.”