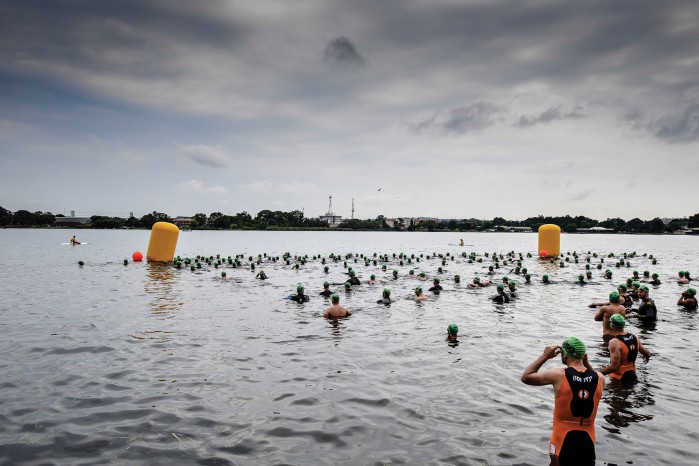 With IRONMAN 70.3 and IRONMAN PE awaiting just aroud the proverbial corner, it’s time for the Modern Athlete DARE TO TRI Programme’s athletes to get serious in their training!

It’s just three months to go before most of you line up for the start of the Standard Bank IRONMAN 70.3 South Africa in Buffalo City, East London on 29 January 2017. This will be the 10th anniversary of what has become one of South Africa’s iconic sporting events, and the 70.3 distance is ideally suited for novice triathletes to step up to. That’s why each year sees close to 50% of the field being novices, and the amount of women doing the event has also increased.

What makes this event so special, and thus on all triathletes’ bucket lists, is a very tough bike route on a national highway with full road closure. The hilly bike course is one of the toughest on the 70.3 world circuit, but after the bike leg, athletes on the run get the most incredible crowd support, especially on the infamous Bunkers Hill, as well as in the finishing straight.

Then, it’s five months to go before some of you line up for the start of the Standard Bank IRONMAN African Championship in Nelson Mandela Bay, Port Elizabeth on 2 April 2017. This will be the 13th edition of the great race and the city of Port Elizabeth residents come out in their numbers to support this one. Recently, IRONMAN South Africa was voted the best race venue and best run experience in the world in the global IRONMAN Athlete Choice Awards, so you have something to look forward to!

DARE to TRI will once again be training for both these events, and we currently have 52 athletes signed up for the programme. Our record from 2016 proves that our programme works. In IRONMAN 70.3 we had 33 finishers and yet another 100% finisher rate, including 17 novices finishing their first 70.3. At IRONMAN South Africa, we had 15 finishers out of 16 starters, including 10 novices.

Sign up today!
Take note that November is your last chance to sign up for the 2016/2017 season. Join the Modern Athlete Dare to Tri Academy for just a R1265 once-off payment and you will receive expect coaching and group training from when you sign up till IRONMAN PE in April 2017. You cannot get this level of coaching, including coached weekend group training sessions, for this period of time at this cost anywhere else.
Go to https://daretotri.canbook.me/e/view/10091 and follow the prompts to register.

The success of the DARE TO TRI programme is that it is an affordable, manageable and sustainable training programme that fits in with your family, work and social commitments. The programme is designed to take complete novices to the ultimate triathlon finish of an IRONMAN event and this is done with a carefully planned gradual build-up.

The DARE TO TRI training works on the following basis:
• Each week (usually on Mondays) all members receive an e-mail detailing the week’s recommended training as well as the month ahead.
• The programme will have two training plans – one for novices and one for those who have already completed a half iron triathlon and are looking to improve their times.
• Weekday training is done by yourself or with a group/club that you may belong to.
• Weekend coached session will be presented by DARE TO TRI COACH Derick Marcisz and ALL athletes are encouraged to come along and train with the group.
• Specifically structured training is available if you require it – for example, you may need a beginner’s programme for one of the sports.

The DARE TO TRI ACADEMY will host the following specialised workshops:
• SWIM WORKSHOPS – one indoors and one outdoors, focussing on swim technique and open water swimming.
• BIKE WORKSHOP – basic bike maintenance.
• BIKE/RUN WORKSHOP – learn how to transition from bike to run.
• PRE-EVENT WORKSHOPS – covering everything you need to know about the event.

So sign up today. It’s time to Dare to Tri!