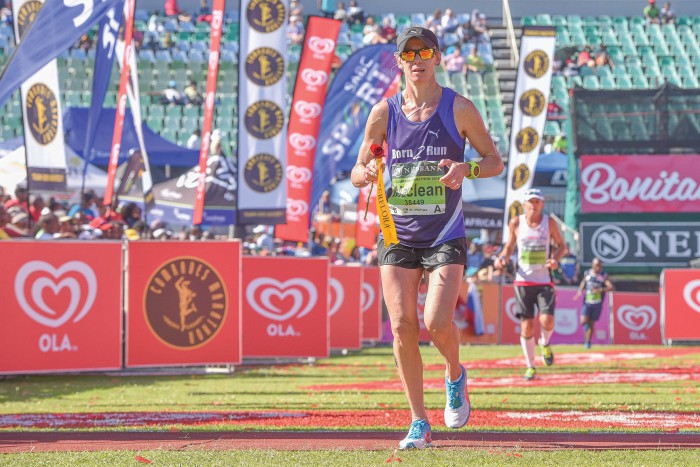 After a number of years struggling with various injuries, Yolande Maclean posted her best ever Comrades finish in 2016, and now she has her sights firmly set on earning a few more gold medals to add to her already impressive collection. – BY SEAN FALCONER

The 2016 Comrades Marathon women’s race will long be remembered for Caroline W?stmann’s heartbreaking implosion as her legs gave in during the second half of the race, allowing Charne Bosman to reel her in and go on to take the win, but in all that drama, another top run by a South African went relatively unnoticed. That was Yolande Maclean coming home fifth woman (and third South African) in 6:43:24, and while she did not get as much media attention as her run deserved, she was over the moon with her result.

“Before the race I said to my best friend that I wanted a top five for the first time, because I was running in memory of her father that passed away earlier this year from cancer. I was actually lying fourth till 1km to go, when Sarah Bard passed me, but I was happy with fifth,” says Yolande. “My main aim was to beat Colleen De Reuck and Kerry-Ann Marshall, and to improve on my 2015 time, when I was ninth in 7:01:49, so I put everything into it and trained really hard. I’m especially proud to have finished so high, since I work full time and was racing against some girls who are full-time athletes. They have more time to recover and sleep, or go to high altitude training camps, which all makes a big difference, so I am very happy with fifth. Now I know what will work in 2017, and I have already started preparing for that.”

INJURY HOODOO
The success of a fifth place in 2016 is a far cry from the injury-affected years Yolande has been through since 2007, when her consistent run of ultra gold medals was halted in its tracks. She had burst onto the South African running scene in 2003 by winning the Loskop 50km ultra in a new course record, finished fifth in the Old Mutual Two Oceans Marathon 56km to claim a first gold medal, and then took ninth position and another gold at the Comrades Marathon. And she was still just 25, so no surprise that she was immediately labelled the ‘next big thing’ in SA female ultra-running… but that also had a few pundits questioning whether she was too young to be racing ultras so hard.

From 2003 to 2007, she was seemingly unstoppable: Five consecutive gold medals at Comrades, four golds at Two Oceans, a few more wins at Loskop, a City to City 50km win in 2005, plus various marathon victories as well. But then the warning of those pundits appeared to come true, as her knee gave in, and Yolande admits she may have over-raced a bit in those years. “When you’re pumped up like that, you don’t hold back, and the wear and tear showed,” she says.

“The reason I stopped running the Comrades after 2007 is because I picked up a tear in my meniscus. That required a small op, but the doctor actually told me I should never run Comrades again. I was out of running completely for six months, then started my rehab with cycling and gym, eventually getting back to running 10s and 21s, but doing it just for fun. I implemented strength work, concentrating on my arms and core, and mountain biking became a great off-switch from running.”

BACK TO SQUARE ONE
A few years later the competitive urge was still there and she entered the Jeep Warrior Black Ops obstacle race, only to tear ligaments in her foot, so she turned to cycling once again to regain her fitness. Then in 2013 she started the Old Mutual Om Die Dam 50km, but had to pull out due to a back problem. “It actually happened a few days before at work, so it was not due to training or racing, but because of walking into a door,” she laughs. “But it took me three years to get it sorted properly, and it flared up badly during longer runs.”

“I thought I could fix it myself by stretching and rolling, but I actually couldn’t sit for long, let alone run normally! Thankfully, just after last year’s Comrades, a chiro eventually diagnosed sciatica, a pinched nerve in the spine, and by October all the pain was gone. Since then I have been fine, but I now realise it had actually stopped my glutes and hammies from firing properly, so my quads had to do much more work – but that in turn has made me a much stronger runner down the line, and allowed me to run so well at Comrades this year.”

GOLDEN QUEST
Looking ahead, Yolande says her big goal is to win another three gold medals in her next three Comrades runs, to go with the seven she has from her seven runs to date. “It’s a big challenge, because there is new competition coming through, but it would be a cool achievement. I would also love to get a fifth gold at Two Oceans, especially after two 11th place finishes in the last two years, but it is often too close to Comrades to race it hard, and my main focus will stay with Comrades. Of course, I would like to do more trail running, and mountain biking, because I like new things and trying new stuff. I need to do different things, otherwise the same races every year become boring, and I will enjoy getting to work my body in different ways.
And I’m still going to pitch up at the Ironman one day…”

Now 38, Yolande just laughs when asked how she is feeling now compared to when she first set the ultra scene alight in 2003. “I actually feel stronger than ever. I think the body gets stronger the older you get, but it’s down to your lifestyle, diet, personal life and mental approach, a combination of many things. The only thing for me is the early mornings before work for training, which are the worst, but if you have that goal and dream, you will get out of bed. Some people struggle because they don’t have a goal. It’s the same with Comrades: I always tell people to make sure their reason for doing Comrades is so strong that they won’t quit, and they will keep going no matter what. You need to have to have that sorted before you even start training for Comrades.”

“Getting back to age, you shouldn’t let that block you, or listen to what people say, but rather listen to your own body. If you’re going to say you’re getting old, then it’s going to happen! So no, I’m not feeling my age, as you put it… but that doesn’t change the fact that I am not looking forward to running with my 40 age category tags in the near future, because they’re going to weight my vest down!”