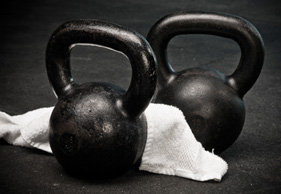 Many have never heard of them, though organisations like the Russian Special Forces have been training with them for years. Only recently have they taken the West by storm with Hollywood celebrities and football clubs, such as Chelsea and Liverpool, incorporating them into their training. In South Africa, they have been relatively unknown, but now more athletes, especially runners, are waking up to their benefits. Meet kettlebells, the trendiest new training tools to hit our shores. Trent Murgatroyd, kettlebell instructor and director of the International Kettlebell and Fitness Federation, explains how kettlebell training hacks off the fat, blasts your cardiovascular system into orbit, and increases your strength and fitness dramatically – all in a very short space of time.

Our modern lifestyles are not what nature had intended for our bodies. We used to be hunters and our survival depended on our physical prowess, namely our fitness, strength, power, speed and endurance! Nowadays, we sit in front of our computers or in meetings for most of our days. And in the evenings, we lie around for hours watching TV.

Some of us do compensate for this lack of physical exercise, but many don’t have the time for a traditional gym programme. And amongst those who do train in the gym, jog or even run long distances, there is also the group of folk who are consistently inconsistent due to injury.

Although traditional weight training undoubtedly produces results, it can, in many instances, exacerbate the risk of both acute and chronic injuries. Specialised gym machines facilitate the isolation of any muscle or muscle group, and load it with resistance. This is great within a controlled environment such as the gym, but not so good for the functional strength required for everyday life, i.e. carrying groceries, lugging suitcases, or lifting your kids. Isolation training can result in a stronger targeted muscle group, but a slightly weaker opposing group and this often places more stress on the core, increasing the possibility of injury. Your super strong chest or powerful hamstrings can contribute to a lower back injury.

Even with the most structured of training programmes, in which you conscientiously balance all opposing groups of muscles, core strength can often lag behind. In addition, if you’re a hardcore weights trainer, cardiovascular fitness training often falls to the wayside. Being ‘buff’ does not always equate to being fit. Most people find it difficult to make the time to get strength, core strength, muscular endurance and cardiovascular fitness all done, diligently and consistently. The easy solution to covering all of these in one efficient and effective workout? The Russian kettlebell.

A KETTLE-WHAT?
No, ladies and gentlemen, it’s not a dumbbell. A kettlebell is a weight that is shaped somewhat like a cannonball with a handle. In South Africa, kettlebells are available in weights ranging from 4kg to 64kg, making these Eastern European training tools perfect for people from all walks of life, and in all states of fitness (or unfitness as the case may be).

Kettlebells are not new and they are certainly not a passing ‘fitness fad’. In Russia, they have been used as an effective training tool for strength and conditioning for hundreds of years. Though the first written description of kettlebells, according to Cherkikh (1994), is attributed to a Russian dictionary in 1704, they have recently been popularised in Western culture by Pavel Tsatsouline, a strength and conditioning coach and martial arts trainer for the Russian Special Forces (amongst others).

Kettlebell training has continued to grow in popularity in the West, as they are simple to use and extremely effective, and this popularity had led to the establishment of three kettlebell associations, namely:
• The International Kettlebell Fitness Federation (IKFF) led by Steve Cotter. He will be visiting SA later this year.
• The Russian Kettlebell Certification (RKC) led by Pavel Tsatsouline.
• The American/World Kettlebell Club (AKC/WKC) headed up by Valery Federenko, ex-world champion.

KETTLEBELL VS THE GYM
Traditional gym machines mainly engage your prime movers, that is, the muscles that enable you to flex and extend through one plane. Free weights (dumbbells and barbells) engage the stabiliser muscles to a greater extent when compared to the controlled gym machine exercises.

Kettlebells, however, load the entire body with each repetition, with an emphasis on the core. This is primarily due to their unique shape and design. The offset centre of mass of a kettlebell allows a lifter to safely move in a curvilinear motion by easily manipulating the lever arm. In layman’s terms, the lifter can swing the kettlebell with great force and then safely decelerate the bell without injury. The curvilinear motion allows you to perform smooth, repetitive motions with a heavier weight for longer periods of time through multiple planes of motion.

In addition, kettlebells’ movements focus on compound, rather than isolation, exercises. An isolation exercise is one in which there is movement using a small group of muscles through just one joint. A compound exercise, on the other hand, recruits several large muscle groups and involves multiple joints to complete one lift. Kettlebell movements are generally compound, explosive, and ballistic, as well as being slow and controlled. Traditional ‘time-sets’ focus on the aerobic component of training, aerobic referring to the energy system that fuels low-intensity activities lasting more than 90 seconds and up to several hours. Shorter power movements challenge both the anaerobic (fuels moderately-intense activities from about ten seconds to 90 seconds) and ATP-PC (fuels high-intensity activities that last up to about ten seconds) energy systems.

In terms of losing body fat, kettlebell training is ideal: the high repetition of the ‘time-sets’, together with kettlebell circuit training boosts the metabolism.

Muscle imbalances and the rehabilitation of muscular-skeletal misalignments can also be improved through supervised kettlebell training with a qualified instructor or biokineticist.

FROM BELLS TO THE ROAD
Strength training should form a big part of any running programme. Kettlebell training has the potential to condition, strengthen and ‘injury-proof’ you in a way that running can’t. It trains all the big core muscles such as the glutes, hips, hamstrings and lower back. It is an excellent form of cross training.

One of the most important benefits is that it conditions your body to be more injury resistant, something that most runners strive for. And we all know that a strong core is needed for running. Kettlebell training is one of the best methods of developing a super strong core. And the best part is that you can do it anywhere, anytime!

PLAY IT SAFE
Although the techniques of kettlebell training are based on natural movements, it is best to find a certified trainer who can assist you with the correct technique.

Once you are comfortable with the techniques, you can purchase a few kettlebells and some kettlebell DVDs, and do a full body workout from the convenience of your home. Kettlebells are also great for training on holiday. Imagine a portable ‘gym’ on the beach!

What are you waiting for? If you want to improve your overall running efficiency and reduce training-related injuries, try kettlebell training!

Modern Athlete Expert – Trent Murgatroyd
Trent is a director (Africa) of the International Kettlebell and Fitness Federation. He teaches kettlebells and boxing at the TopBox Gym in Fourways, Johannesburg. Trent discovered Russian kettlebells in 2004. In May 2008, he completed his RKC in Denmark, and then in October 2008, the CKT. He has also trained in martial arts, such as aikido, kyokushinkai karate, JKA and kickboxing. He trains people of mixed abilities, from those who wish to get into shape and/or improve their overall fitness and strength, to athletes from various sporting codes. He has worked with world-ranked competitors in boxing, judo and biking. He has even trained a 90-year-old lady!