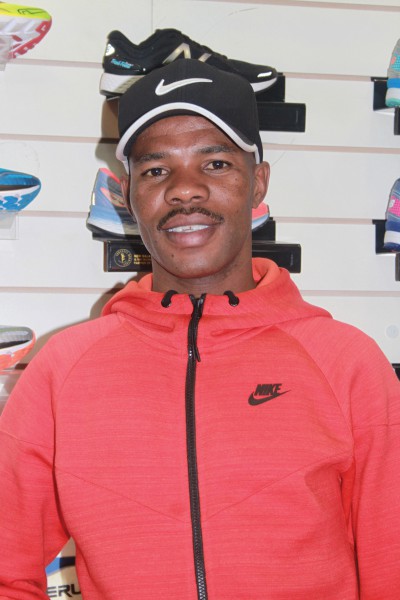 It’s been quite a year for elite road and trail runner Eric Ngubane. He can look back on a win in the Old Mutual Two Oceans Trail Run, and a fourth win in the Mont-Aux-Sources 50km trail event, and second place in the SA Ultra Trail Championships in Cape Town in July, which earned him selection for the IAU World Ultra Trail Championships in October. Sadly, he and his team mates never made it to Portugal, because ASA withdrew permission for the team to compete due to the disputed status of trail running within the national structures of the sport, but his motivation to chase more racing honours is stronger than ever. – BY RACHEL PIENAAR.

Eric first heard the news that he was no longer going to Portugal for the World Ultra Trail Champs via a team Whatsapp group, and it was later confirmed on social media. “Our manager did send a message to the group informing us, but I only really figured out what was going on when I saw a Facebook post saying that ASA hadn’t given us permission to compete,” says Eric. “I can’t find the right words to express my disappointment. When you’ve trained so hard for something, it is always sad when you don’t get the chance to compete.” However, in spite of his disappointment, the KZN-based athlete says he is going to remain positive about the sport and hopes to get another opportunity in the future to represent South Africa on the world stage.

RUNNING MENTOR
Eric first took up running in school, thanks to the encouragement of his teacher, Xolani Cele, who had spotted the youngster’s obvious running talent. Growing up on a farm in Cato Ridge, between Durban and Pietermaritzburg, Eric had to run around tending to the family’s cattle, even in the rain, so running had always been part of his daily life, and at school he showed great promise in cross country, winning most of the races that he entered.

“While I was growing up, I played a lot of soccer, but Mr Cele kept nagging me, saying forget about the soccer, just do the cross country,” says Eric. “He would drive up to 40km to take me to the cross country events to compete.” Eventually, the perseverance of his teacher coupled with the thrill of winning most of the races he entered, sparked a passion for running in Eric that still burns intently today, and has helped him carve a name for himself in the sport. “I’ll never forget how Mr Cele helped me,” says Eric.

THE BUSY ATHLETE
These days Eric finds himself working at the Sports Zone Running Company store in Durban North to support his family and his parents. He says he’s on his feet all day, but still manages to balance work with family and his passion for running. A typical day for Eric begins at 2:30am with a 20km run before he heads off to work. Thereafter he runs another 20km in order to get home to his family. Despite this demanding schedule, Eric still manages to spend as much time with his family as possible. He loves to play with his children and relax with his partner, and then spends much of the rest of his free time researching and studying techniques and training tips.

He says he has never had any professional coaching, and instead has developed his own training schedule and diet plan, built around his racing schedule. “Sacrifice is not easy. You have to discipline yourself, but I just love running! When you’re talking about running, you’re talking about me, and I always try my best in every race,” says Eric, adding that his family are very supportive of his running. “When I am disappointed, my family encourages me to get up, try again and train even harder for the next competition.”

Besides his love of running, another thing that inspires Eric to do well in the sport is his passion for his home community in Cato Ridge. He says he wants to inspire the young people with his achievements, in order to get them to reach for their dreams and to never give up. “I’d like to take it back to the community… Because I know there are a lot of kids that have the ability to produce good results. Success shouldn’t just be about you, it’s for who comes after you, how you can help and inspire the next generation, so you have to give it back to the community.”

CARVING A NICHE IN TRAIL
Eric’s love for running extends to both road and trail, so he trains on both, with most of his off-road training done on dirt roads and amongst the sugar cane fields near his home. On the road, some of his most notable achievements include clocking a marathon best of 2:31:04 in 2013, winning the Wings for Life World Run South Africa in 2015, covering 68.86km before the catcher car caught him, and finishing the Comrades 11 times, with a best of 5:50:29 in 2012 for his second Wally Hayward medal. This highly prestigious medal is awarded to athletes that clock a sub-six-hour time but finish outside the top 10 gold medal positions. Having come so close to the golds at Comrades, it is no surprise that Eric says he has unfinished business there: “I want to start training early this year to build up for the Comrades Marathon next year, because I know I can win it!”

However, it is in trail running where Eric is really making a name for himself. He has won the Three Cranes 100km Stage Race three times, posted wins at the Ultra Trail Cape Town 100km, Mount Moodie 80km Ultra Trail and the Old Mutual Two Oceans 22km Trail Run, to go with his four wins at Mont-Aux-Sources and various other trail events. That saw him being selected last year as part of the Trail South Africa Development Team that competed in the 76km Grand Raid Le Templiers in France. Although the race didn’t go as he had hoped, as he was plagued by fatigue, he came away with valuable experience of international trail running, and looked set to put that experience to use at the World Champs this month, until ASA’s decision not to send the team. As he says, “You have to motivate yourself through the tough moments in a race, you must be mentally prepared.”

SEEKING NEW CHALLENGES
In spite of the disappointing news, Eric remains positive, saying that although he trained hard for World Champs, he is always hungry for the next challenge and wants to do his best in every race. “I still look forward to representing my country in the future. I will carry on training, and you have to keep your standard high and keep the motivation going, because opportunities come and go and you must be prepared for them.”

Eric says he loves to read about other athletes and draws inspiration from them, but his greatest inspiration is former Comrades winner and Nedbank Running Club National Manager, Nick Bester, who has been helping him to improve his training since he joined the Nedbank club in 2014. “If you look at Nick’s background, he was a very determined runner, one of the guys who was always looking for a challenge, always part of the leading bunch in a race. That is what I admire about him, he is like a headlamp for me, highlighting where I want to go with my career.”