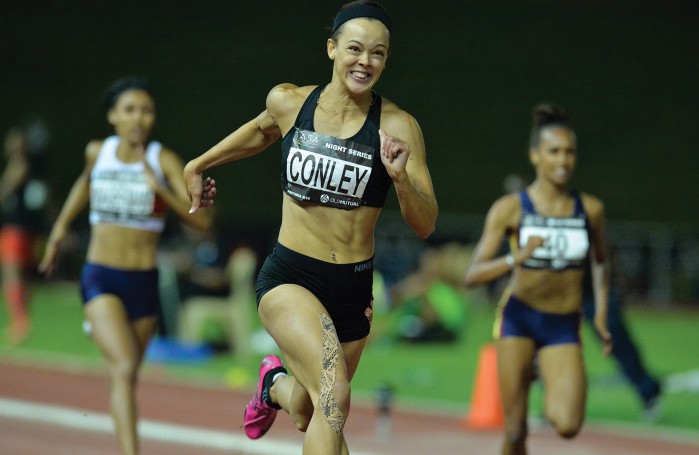 After a few years of struggling with injuries and setbacks, sprinter Alyssa Conley is back on track. Fresh from a great 2016 season, including numerous titles, medals and personal bests as well as her first Olympics in Rio, she is already building up for the 2017 season, with the World Champs and the long-standing SA women’s 100m record firmly in her sights. – BY KYLE DEELEY

When a barefoot Alyssa Conley won her first race in grade one at Wilhelmina Hoskins Primary School, her teachers immediately began calling her Zola Budd, after the barefooted teenage prodigy of the early 80s. Born and raised in Riverlea, south of Johannesburg, Alyssa enjoyed great success throughout her primary school years, including her first selection for South Africa, at the tender age of 12, for the 2005 Schools Games. Even though she lined up in the 100m against older, more experienced under-14 girls, when the gun sounded she took off like a lightning bolt and won the race in 12.05 seconds, setting an SA age record that still stands.

CHOOSING ATHLETICS
Alyssa moved on to Mondeor High School, where she eventually had to choose whether to focus on athletics or not. “I continued running throughout high school, but also played badminton at the same level as my athletics. Eventually I had to decide which one to pursue, and athletics came out on top”, explains Alyssa. That looked like the right decision as she was once again selected to represent her country in athletics at the 2007 World Youth Games, and then in 2009, in her first year studying at the University of Johannesburg, she competed at the 2009 World Junior Championships as well as the African Junior Champs.

However, 2009 would also prove to be a major low-point in her career. “Later that year I competed in a 200m race and upon crossing the finish line, fell and tore my right hamstring. After seeing a doctor and a physio, I was told I had a third-degree tear in my hammie, putting me out for three months and ending my season,” explains Alyssa. The following year proved to be just as bad. “My running in 2010 was horrendous. I competed at various events, but wasn’t able to achieve anything,” she says.

“After seeing up to 15 different doctors, physiotherapists, orthopaedic surgeons and even psychologists to determine what was wrong with me, it was UJ’s own physiotherapist, Ellie Young, who discovered that my right hip bone was abnormally shaped, otherwise known as a cam bone,” says Alyssa. This is a deformity of the femoral head at the top of the leg bone, which prevents the bone from rotating smoothly in the hip socket, and Alyssa had to go in for surgery to have the problem fixed. Her post-operation rehab took nine months, putting her out of running again until the 2011 season.

STOP-START COMEBACK
“In 2011 I made a comeback to the sport I so dearly loved”, says Alyssa, and by 2012 she was once again competing at the top level, claiming both the Senior and U/23 SA 100m titles. “My running had improved drastically compared to the year before and I felt really good, considering I had come off some really bad form.” However, disaster struck again when she was competing in Europe late that year, as she injured both her knees. Unsurprisingly, she was bitterly disappointed. “Nothing was going my way and there were no achievements. I was gutted with myself and decided to give the athletics thing a break. It was time to step back and fix things.”

Alyssa thus disappeared off the athletics radar for the whole of the 2013 and 2014 seasons, focusing on her sports management and sports psychology studies instead, but eventually she began to feel the urge to get back on the track. “In 2014, I realised that athletics was my life and I started running again under the guidance of my coach, Lethu Hamola. My training was going well until Lethu went back to Namibia to coach, leaving me with no coach,” says Alyssa. Fortunately she was then helped by Roger Hatengi, before finally meeting her current coach, 2001 World Champs 4x100m relay gold medallist Morne Nagel.

“We started working together at the beginning of 2015 and he said he needed a year to get me back to form. We worked for the whole of 2015 and bang, here we are in 2016,” says Alyssa. “I began running well again, and I had a healthy rivalry going with Carina Horn that pushed me to achieve even more. We were both in good form and both chasing Rio qualifiers and Yvette De Klerk’s 1990 SA 100m record of 11:06, and after running my first qualifying time for Rio, at the Pilditch Night Series, I knew I was back in action.”

Alyssa went on to beat Carina to the 100m title at the South African Senior Champs and also claimed the 200m title, set new PBs for both distances in Switzerland in June (11.23 and 23.00), then claimed a 200m silver medal with a new PB of 22.84 at the African Championships in Durban, where she also helped Team SA win gold in the 4x100m relay. And that was followed by the big news: She was going to the Olympics. “Hearing the news was a dream come true! Everything I had worked for had finally paid off and I was going to do what I had always wanted to do!”

DISAPPOINTMENT IN RIO
Alyssa went to the Olympics determined to soak in as much of the experience as possible. “Rio was amazing! The opening ceremony was one of the greatest things I have ever experienced, and the athletes’ village had a comfortable setting and all the services we needed. From shops to dining halls, doctors and medical staff to a laundromat and a gym, it was all there for us to use,” says Alyssa. “But just being able to meet athletes like Rafael Nadal, Usain Bolt and Sonny-Bill Williams makes you realise that the goal you have worked so hard to achieve is finally a reality. I also came within touching distance of Shelley-Ann Fraser Pryce, and just that is something I’ll never forget.”

Alyssa says she was focused on achieving big things in the women’s 100m and 200m events in Rio, but things didn’t quite go to plan. Running in heat seven of the first round in the 100m, she was a little unsettled by a false start by a fellow sprinter and then clocked 11.57 to end sixth in her heat and be eliminated. Three days later she ran in heat three of the 200m first round and clocked 23.17 to finish fourth, just 0.23 seconds too slow to progress to the next round.

“After not achieving in Rio, I have been very hard on myself – it took a good month to get over it. But I realised that I gained a lot from the experience and I know where I need to work harder,” says Alyssa, who has already begun training for the 2017 season, where she will be looking to qualify for the World Champs. “I am still unsure if I want to compete in the 100m or 200m. All I can do is work hard and fix my Rio results. I’m also going to be chasing that SA 100m record, and I would love to be the first South African woman to run 100m in under 11 seconds!”