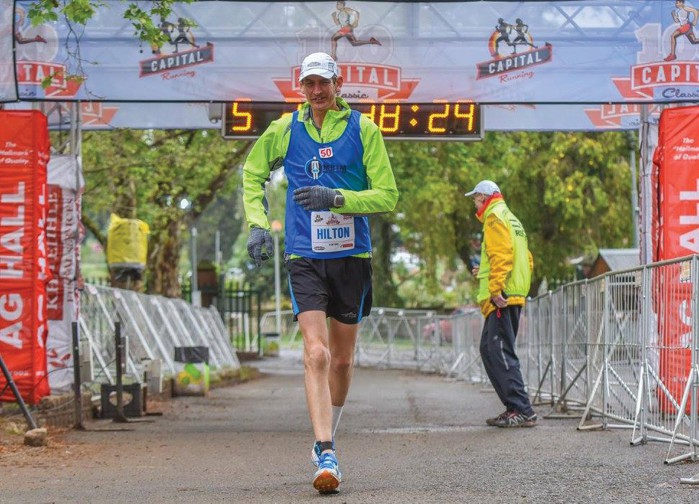 Well known endurance junkie Hilton Murray is already a legend thanks to his previous running feats, but in late September he added another one to the list as he went after a slew of age group records in his first six-day circuit running event. – BY SEAN FALCONER

In 2014 Hilton Murray made jaws drop when he completed the Ten10 Challenge, running the 89km Comrades Marathon distance each day for nine consecutive days to get from Johannesburg to Pietermaritzburg, and then ran the 89km Comrades on the 10th day! This remarkable feat made him an overnight sensation in SA running, and then in 2016 he was once again in the spotlight as he pushed disabled student Anita Engelbrecht in a jogger pram in the Two Oceans and Comrades ultras, to allow her to experience the thrill of finishing the country’s biggest races. But he wasn’t done yet…

Having recently turned 50, Hilton decided the time was right to head to Pietermaritzburg for the Capital Classic six-day circuit race, with the intention of not only ticking off a bucket list item, but also chasing down a few 50-54 age group records. “I posted on Facebook that I was going to try do six 100 milers in six days, because like most of my previous big runs, I was once again doing this to raise awareness for a good cause, this time for the PinkDrive’s More Balls Than Most campaign for testicular cancer. It was a bit of a publicity stunt, because I wanted to generate as much publicity as I could for the charity.”

The ‘six-day seed’ had been planted way back in 1996 when Hilton did his first Washie 100 Miler and overheard two runners talking about a six-day event. “They told me Washie is actually easy by comparison, and that planted a seed – but it took me 20 years to do my first one.” To prepare for his six-day debut, Hilton ran a few ‘shorter’ circuit races, starting with 173km at his first event last year, “just to get into it,” as he puts it. Then four weeks after his Comrades run with Anita, he did 100 miles in a 24-hour event in Johannesburg, and that was followed by the ORAK 12-hour in the Cape, where he did 83km while pushing Anita in the jogger! “That was actually tougher than Comrades, because there were no downhills to rest on, but it was excellent training for the six-day.”


Round and Round We Go
So, with his wife Lizet seconding him, Hilton started his quest in Pietermaritzburg, with the first goal to better his Comrades best of 9:12. He duly passed the 89km mark in 8:47. “My next aim was my 100-mile PB, and I made that in 16:45, about three hours faster than my previous best! That also set a new age group record for the distance.” Next he went after the 24-hour record, which stood at 181km. It now stands at 182km. “After that the goal was two 100 milers in two days and the 48-hour record – the previous record was 301km, and I did 325km. It’s actually the second longest distance in SA for 48 hours, because only Johan van der Merwe has gone further, doing 334km.”

But then the real mental slog began, says Hilton. “Suddenly, after two days of chasing record after record, the next one was a whole four days away! I had spoken to SA six-day record holder Eric Wright, who set the bar at 816km, and he warned me that the third day is the toughest, and to make matters worse, it rained that whole night and the temperature went down to eight degrees. That night I really struggled, as I had lost all my body fat by that stage, and at one point I had to go into my caravan and wrap myself in my duvet for an hour to warm up again before I could continue!”

Target in Sight
The big record that Hilton was gunning for was the 50-54 age best for six days, which stood at 651.8km, and for the next few days he was always on track to do it, but things were not going smoothly. “I stopped for a sleep on the fourth day and an hour or so after I got going again, my shoe just collapsed. I knew immediately it was a problem, because I felt pain behind my big toe. I put my other pair of shoes on, but they were heavier, off-road shoes, and my knees immediately felt tender, so I asked Lizet to go back to the guest house to fetch more shoes.”

“Unfortunately, the only other shoes I had with me were brand new 12 and a halves, while I normally wear a 13. I actually couldn’t get my foot into the one, so I decided to lie down for a few more hours, feet in the cold air, and it worked. But then 50km after changing shoes, my shin started hurting badly, so I decided to slow down and manage the situation. From then on, every time I started after a break, it took me about 15 minutes for the first 1km lap just to try warm my leg up!”

Despite these problems, Hilton cruised along and finished on an astounding 706km, improving the 50-54 record by some 55km, and posting the eighth-longest six-day distance of all time by a South African. And then came the next chapter of his already incredible week… getting home again. You see, Hilton had begun the trip by driving from Cape Town to Pretoria to go fetch the 4×4 trailer camper that he sold to his brother earlier this year, then picked Lizet up in Joburg on the way down to Maritzburg (she had gone up for two days for work). When the race finished around midday on Saturday, they packed up the camper, had a late lunch and finally got into bed at 5pm.

Hilton was awake again at 4am, unable to sleep further, and after visiting some family, the couple hit the road for Joburg at 11am. “We had six and a half hours to get to the airport so Lizet could catch her flight back to Cape Town and be back for work on Monday, and we only just made it by 15 minutes. I had forgotten that we were pulling the trailer uphill now! Anyway, I then headed to Pretoria, spent some time with my family, and on Tuesday I drove back to Cape Town. The original idea was to stop over and sleep halfway, but the pain was too much and I just drove right through. Then I spent the rest of the week on my back!”

So What ís Next?
Typically, Hilton laughs when asks if he has now ticked the six-day off his bucket list. “Actually, Johan van der Merwe sent me a message about a big six-day race in Eastern Europe, and I immediately said I have to go do it! But a six-day is very hard on your body, so I will probably only go back for one more, and one more 48-hour, but not in the same race again – you set yourself up for problems if you race the first two days too hard. That said, looking back now, if not for the shin problem, I think I could have gotten close to the SA record. I mean, for the last day and a half I actually did very little running. Then again, maybe next time I will end up walking again…”