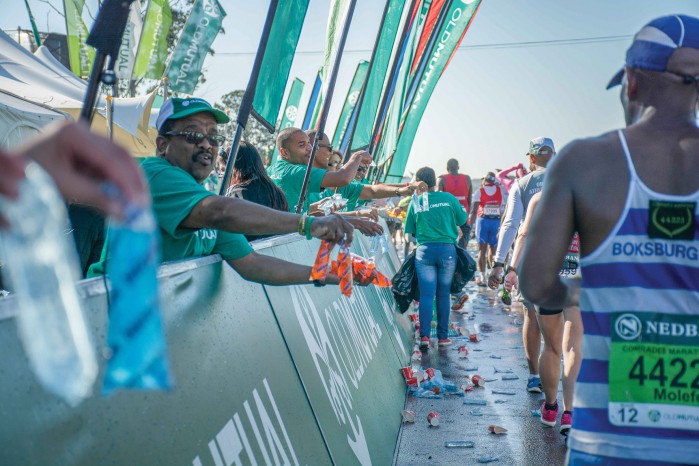 From elites to weekend warriors, many athletes do not know the rules of athletics that cover all the running disciplines, and this sometimes leads to a clash with authority, or fellow runners. This month we look at refreshment stations in road races. – BY SEAN FALCONER

Thanks in part to Modern Athlete’s #runclean Campaign, many people are currently debating the use of plastic sachets or cups for handing out water at refreshment points in road races, and the litter problem that results. Some have suggested that all runners should carry their own water in hydration packs or water bottle belts, while others have even said that runners don’t need water in races up to 10km, since they regularly go for 10km training runs without taking water along. Cutting out water tables in races would mean no more plastic litter, but it is actually written into the IAAF rules for road running that water must be supplied to all athletes… and nobody has found a reliable, cost-effective alternative to plastic sachets as yet.

IAAF RULE 240.8: Drinking / Sponging and Refreshment Stations
240.8 (b) For all events, water shall be available at suitable intervals of approximately 5km. For events longer than 10km, refreshments other than water may be made available at these points. Note (i): Where conditions warrant, taking into account the nature of the event, the weather conditions and the state of fitness of the majority of the competitors, water and/or refreshments may be placed at more regular intervals along the route.

This means that official ASA-sanctioned road races must provide water tables at regular intervals, since personal seconding is no longer allowed in road races in this country due to the traffic congestion it causes, and this is covered by Rule 20 of the ASA Rules and Technical Standards, with a few changes from the IAAF rules, notably the minimum distance between refreshment stations.

ASA RULE 20.2: Refreshment Stations and Seconding
20.2.4 Where race organisers impose a restriction on personal seconding, they must provide refreshment stations at least at 3km kilometre intervals throughout the race.

This means that an ASA-sanctioned 10km race must have three water tables, at 3km, 6km and 9km, whereas IAAF rules would actually make it possible to just have one at 5km. That means potentially three times as much litter left on the roads! Some good news is that at least one athletic province has decided to do something about this problem, as seen in the new Western Province Default Rules for Road Running Events:

WPA RULE 17
17 Any athlete accused of irresponsibly disposing of litter may be subject to disciplinary action.

Western Province is to date the only athletic province in South Africa to officially adopt and promote the #runclean Campaign, urging athletes and organisers alike to make a greater effort to stop the litter problem in road races, and many other clubs and events around the country are already actively supporting #runclean as well.

There are also rules that athletes and their supporters must abide by when it comes to the actual handing out of refreshments:

IAAF RULE 240.8
240.8 (e) The Organising Committee shall delineate, by barriers, tables or markings on the ground, the area from which refreshments can be received or collected. Refreshments shall be placed so that they are easily accessible to, or may be put by authorised persons into the hands of, the athletes. No official or authorised person shall, under any circumstances, move beside an athlete while he is taking refreshment or water.
240.8 (g) An athlete may, at any time, carry water or refreshment by hand or attached to his body provided it was carried from the start or collected or received at an official station.
240.8 (h) An athlete who receives or collects refreshment or water from a place other than the official stations, except where provided for medical reasons from or under the direction of race officials, or takes the refreshment of another athlete, should, for a first such offence, be warned by the Referee. For a second offence, the Referee shall disqualify the athlete.

ASA RULE 20.2
20.2.2 Where permitted in race rules, seconds or team officials may assist athletes only at designated refreshment stations by handing them refreshments and water. Seconding is not allowed outside the designated refreshment stations, and seconds/officials shall not, under any circumstances, run beside an athlete taking refreshment. The stand and hand rule shall apply.
20.2.3 Seconding may not be conducted directly from a vehicle (including two-wheeled) whether stationary or moving.

So, not only must races provide water to runners, but runners can only receive the water in specified places along the route, from a designated person, who is standing still. Now you know.