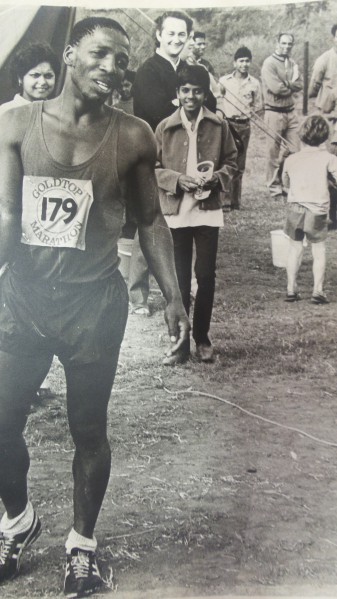 “Simon was a pioneer and a leader, who inspired many young people to take up sports. He was passionate about sports and was a very gifted sportsman. He pioneered the way for Black participants in the Duzi Canoe Marathon. Even in his later years he always had time to give advice to runners on how they could improve their running. He will be missed.” Said Comrades Marathon Chairman Macdonald Chitja.

With 20 successful Comrades finishes, Simon accumulated 12 Bronze and 8 Silver medals, achieving his best time of 06h40min in 1971. After the Comrades Marathon was officially opened up to runners of all races and genders he was awarded all his retrospective Comrades finishes that he had run prior to 1975.

Simon was born on the 4th of March, 1942, near Howick. He was one of 9 children, with five sisters and three brothers and had begun running when he was 28-years-old. As a keen sport's enthusiast he eventually took up canoeing and became the first black person to take part in the Duzi Canoe Marathon. Simon also got involved in mountain climbing and rafting, which became one of his favourite pastimes.


Farewells and Tributes from the Comrades Marathon Association have poured in for Simon following the news of his passing.


Former CMA Chairperson, Barry Varty says, “It is sad to learn that Simon has reached the 'end of the road ', and crossed the finish line for the last time. We remember his disadvantaged years and his retrospective reward in being recognised for his 'unofficial' Comrades Marathon runs. We don't say goodbye, we say: ‘Carry on Simon, we'll catch you later’.”


CMA Vice Chairperson, Cheryl Winn says, “I personally did not know Simon, but my husband Mick remembers him as an accomplished athlete and an upstanding citizen, entrepreneur, role model and trailblazer for future Comrades Marathon runners. He was one of the first athletes to be awarded medals retrospectively for having completed the Comrades Marathon unofficially prior to 1975 and which were substantiated as official.”

CMA International Brand Ambassador for Scotland, Don Mellor reflects on the humble and talented sportsman that Simon was. “I remember Simon as a 'quietly spoken man' who had an enormous running talent. It's no wonder that he went on to achieve such an amazing Comrades record. RIP Simon Mkhize.”

CMA Board Member, Terence Hoskins says, “I had the opportunity of getting to know Simon very well. He always exhibited the fine and noble qualities of a gentlemen, in sport as in life. He was a talented and disciplined individual who inspired many athletes to greatness. He was a great guy and will be greatly missed. My thoughts are with his family and friends.”

CMA Green Number Convener, Eileen Hall says, “I have huge respect for Simon as I knew him from when he ran with my Dad, Ray Karg. He was a very humble, respectful and pleasant runner.”

His funeral was held on Saturday the 15th of October.

Simon was an inspiration and had a true passion for his sports, he will be sorely missed.