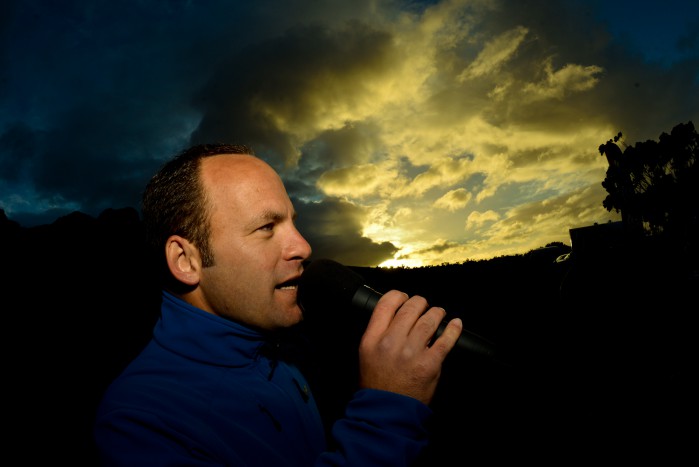 From losing clothes and being attacked by a branch to surviving frostbite and beer before sunrise, I’ve had some interesting times as a running journo! – BY MODERN ATHLETE EDITOR SEAN FALCONER

Yesterday I was driving behind a truck that was spewing out exhaust fumes and smoke, making my eyes water, and it brought back memories of watching the Cape Town Spar Women’s 10km race a few years ago from the ‘comfort’ of the boot of a 4×4 SUV, sitting right above the exhaust pipe and trying to stop my eyes from watering from the fumes burning my eyes. That got me thinking about some of my ‘misadventures’ over the years while covering road running events.

My first experience of exhaust fumes was sitting on a VW combi’s tailgate at the Om Die Dam 50km ultra in the North West in 2000. I had a great view of the race and took some great pictures, but man oh man, were my eyes and throat toasted by the time we reached the finish, not to mention the fact that I was squirming around much better as the engine got hotter and my seat warmed up! The same thing happened at the Wally Hayward Marathon in Pretoria later that same year – in fact, it may even have been the same combi – but again, I got some great pics, so I didn’t mind too much.

You can leave your hat on…
I’ve had some bad luck with clothing when covering races, particularly caps. One year on the press truck at the Soweto Marathon, I was sitting on the bottom level of the stepped seats on the truck when one of the guys sitting on the top row shouted “Duck!” to warn the others about a branch that was about to decapitate the top rung of journo’s. Stupidly, I turned to see what was going on… just in time for the branch to break off as it hit the seating frame and fall on top of me, swiping me across the face a mere two millimetres below my eye!

All jokes aside, I was incredibly lucky that the branch didn’t take my eye out, but instead it knocked my sunglasses off as well as my favourite cap. I caught the sunglasses just as they were about to fall into the road, but my cap went sailing overboard. In dismay, I saw one of the leading men, Frans Chauke, pick it up and put it on, and when he finished the race I asked him about it – because I wanted my favourite cap back, damnit! – but he just looked at me like I was mad… Scratch one cap.

A few years later I was on the press truck at the Loskop 50km ultra in Mpumalanga when I turned to speak to a fellow journo and the wind caught my latest favourite cap. Whoosh and it was gone… and that truck driver was not going to stop for my cap, since we were barrelling along to catch back up to the leading men after we had stopped for a pit-stop. And would you believe it, two years later at Loskop I was wearing expensive gloves to ward off the cold as we covered the race from open-top game-watching land-drovers, and somewhere in all the clambering around one of my gloves went over the side. Hmmmm, there seems to be a pattern forming here…

Cheers, boys!
One of the best races to cover was always the Comrades Marathon, not just because of the history and drama of the event, but also because the press truck was traditionally great fun, especially when you were on the truck with all the ‘old-timers’ who had been covering the race for many years. Things have changed a bit since those years, but back then, when we covered the ‘Up Run’ that started in balmy Durban, the first beer was cracked open before the sun came up! Nobody got drunk, I swear, but man did we laugh… after all, there is not that much to see for the first half of the race as the TV runners go sprinting clear of the pack, and the real race usually only comes to the fore in the second half, so the journo’s had to keep ourselves entertained.

Of course, on the ‘Down Run’ at Comrades the journo’s demand piping hot coffee instead of beers as the race starts, because it’s normally bloody freezing on that truck coming down Polly Shortts in the dark. I did that press truck trip twice, in 2003 and 2007, and I can tell you that it is the only time I have ever wished to be beamed up by a higher power rather than endure that cold anymore. I never want to be that cold again!

In 2007, after surviving the cold on Pollies, I also had to survive another misadventure: After leaving the leading man with about five kays to go, the truck was making a sprint for the finish venue so we journo’s could be there to see the winner come in, when suddenly there was a loud whirring sound reverberating back off the concrete wall alongside the highway. A short while later there was a loud bang and the truck slewed to the side – the left rear tyre had burst. Luckily it didn’t skid or tip and the driver did well to bring the truck to a halt without crashing, but we were still about two kays from the stadium. No problem, cue 20 journo’s in three layers of clothing, lugging laptops, cameras and discarded clothing, all jogging along the highway down to the Kingsmead Cricket Stadium. We made it, though, very sweaty, with a few minutes to spare before the winner came home, and we got our finishline pics and interviews.

Don’t drop the clutch!
Speaking of ‘car trouble,’ I reckon the funniest thing I’ve seen so far was in the inaugural running of the Totalsports Women’s 10km in Cape Town a few years back (although it was then known as the Avon Women’s Race). The journo’s all piled into a VW combi parked in front of the start line, and we warned the driver to get ready to pull away fast once the gun was fired. The countdown to the start commenced, the gun was fired, a few thousand women came sprinting down the road, including Rene Kalmer, Charne Bosman and many other elites – and the driver stalled the combi. Right in the middle of the road!

Well, what could we do but sit there and let the whole field pass by, then take a different route to get back ahead of the leading pack, and then it was back to business as usual, but man did we get a few dirty looks while sitting there in the middle of the road causing a traffic jam as all those women had to go around us. Let’s just say there were quite a few comments about male drivers not being so much better than women after all!

You know, looking back on the past 17 years, I realise how privileged I have been to both run and cover some stunning races throughout South Africa, and these stories are just some of the many good memories I have already collected as a running journo. Hopefully there will be many more.