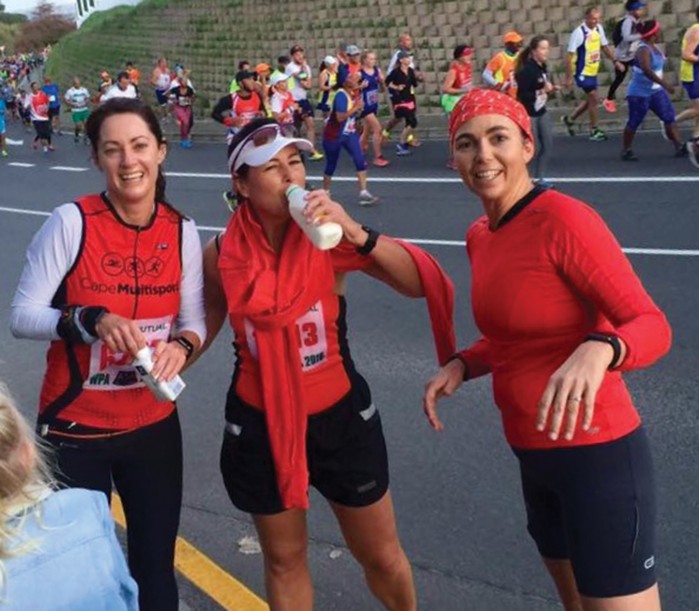 For most athletes in a race, arriving at a refreshment station means grabbing some water and quenching their thirst, unless you’re Miné Swart… and you don’t drink water during races. Or fizzy drinks. Or sports drinks. Instead, she keeps an eye out for her trusted bottles of milk. Yes, you heard right. Milk! – BY SEAN FALCONER

It was day one of the inaugural Cape Odyssey five-day trail run in 2007 and Miné Swart was taking huge strain. She was an experienced ultra-marathon runner, but had never done any trail running before, and it was showing as she and teammate Yusuf Abrahams hit the final 11km beach section of the 29km first day. “I was surrounded by trail fundies, whereas Yusi and I didn’t have trail shoes, or fancy hydration packs, or any knowledge of trail running. And then when we got to the water points, where they had water and an energy supplement, I just kept thinking to myself, I’m so thirsty, I could do with some milk.”

Having grown up on a dairy farm in the Natal Midlands, Miné says she was brought up on fresh milk. “There was always milk in the house, and when you were thirsty, you drank milk instead of water. Our household drank 10 litres of milk each day! As a result, milk had always been my recovery drink after races, the only thing that quenches my thirst, and I decided to try it during the race as well. We had only just made it before the cut-off on day one, while day two was 60km long, and I didn’t think I would make it unless I could have milk on the route, so I went to ask for some help. Luckily, race volunteer Hano Maree agreed to take a few frozen bottles of milk out on the route for me, as he was driving the lead vehicle and could drop them off along the way, while Yusuf had two bottles rolling about in the backpack he was carrying.”

“The milk really worked for me and since then I have run all my races on milk, and converted quite a few people along the way. I cannot eat while running, and cannot handle anything sweet, because it just makes me nauseous. Also, I find that that too much water jiggles around in my stomach, but I can drink a litre of milk without any problems, and it just feels like it goes straight into my muscles. In my first few Comrades runs I ended up in the medical tent, dehydrated and throwing up, but since I started to run with milk, I have never finished ended up on a drip again, not even at the Washie 100 Miler.”

Time to Start Running
Miné hails from a sporty family – her mother played SA hockey, and she and her three brothers regularly joined her parents at the Midmar Mile swim – but running would only come later. At school she focused on hockey and swimming, continuing with hockey while studying music and drama at Stellenbosch University, followed by a teaching diploma. While at varsity she met her husband, Francois ‘Pikkie’ Swart, and they have been married for 22 years. After graduating she taught music at primary school level, but after 10 years she decided to change career path, becoming a medical rep. It was around the same time that Miné decided to take up running.

“I grew up with the Comrades Marathon and had joked for years that I would run it when I was 30… and then I realised in January 2000 that I was turning 30 later that year, so this was it. I had never even run 5km before, but I entered, chose the cheapest neutral shoes off the rack, and started doing three 8km runs a week for training. People said I must qualify, so on the fifth of March I ran my first ever race, the old Cape Town Marathon, which I finished in 4 hours and 27 minutes. My next race was the Two Oceans ultra, followed by the Comrades… and then I did nothing for the next six months!”

That became her regime for a long time: Start training in January, run till Comrades, then take six months off… “Until I started running the Washie, which meant I had to keep going for another few months. But looking back on 16 years of running, with 15 Two Oceans and 15 Comrades medals, I have had no injuries or issues, and I think it is because I’ve never been overtrained and had enough time to recover. And because the milk gives me the power to go further!”

The Milky Way
Of course, there are some logistical challenges to getting bottles of milk out on to the course at races, and here Miné says she needs to thank all the people who have helped her over the years. “In particular, I really want to salute the Western Province Athletics referees, because one day I took a chance to ask them before a marathon to take four bottles of frozen milk out on route for me. After explaining my story, they said yes, and since then it has become so standard for them to take my milk out for me that one year at the West Coast Marathon, they actually announced that the ‘Milk Lady’ must please come hand in her milk so that they can start the race!”

She says people at the big races are often helpful as well. “At Comrades, besides having my parents along the route to give me my milk at four different spots, I also look for people with picnics beside the road and ask for a sip of milk. But I always run with some money, so that I can pop into a shop to buy milk, and one year at the Durbanville Marathon, I had no milk on the route, so I actually went into a dairy that we ran past and they dished me up some lovely ice cold milk straight from the tank!”

Unsurprisingly, Miné sometimes gets interesting reactions from fellow runners regarding her milk strategy. “In one of my Two Oceans runs, Dr Hans Neethling, a physician that runs for AAC, saw me running with milk and said he was going to run all the way with me if he could share some milk. But other people often tell me that the milk will react with my stomach and give me problems, but my answer is always the same: Do you think I would drink it if it gave me problems? Since changing to just drinking milk, I have not had one single race with stomach problems. That said, I can’t do flavoured milk, because it’s too sweet. I just want ice cold cow’s milk!”

Looking ahead, Miné says she still has a few bucket list ultras she would like to do, including the Skyrun in the Drakensberg and the Augrabies in the Kalahari, as well as some of the big trail races overseas. “I also still want to tackle the Ultra Mont Blanc in France, the Western States in USA and the Marathon Des Sables in Morocco, or the Amazon race… but then I will not only need to find somebody to train with, since I’m too lazy to train by myself, but I will also need to find an alternative to milk, since I doubt I will be able to get it along the route in the Sahara or the Amazon! Still working on that problem…”