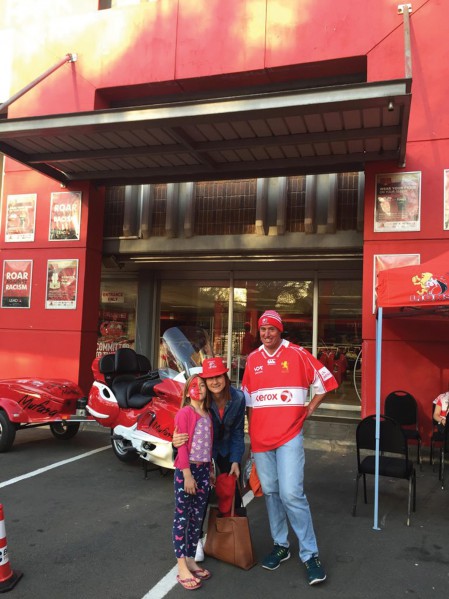 We thought you might be interested in this story from the Boskruin Running Group in Johannesburg, because it is nice to see that we can make a difference to someone in need. There are so many initiatives underway within this group, from collecting running shoes for underprivileged athletes to collecting race medals for the Organization for Paediatric Support in SA, but this story about helping our friend Jan Alwyn still stands out. – Submitted by Shawn Combrinck

Jan Alwyn is someone many of us know, or you will probably recognise him when you see him, as he is a younger man without much hair, a huge pair of hands and a heart of gold. He may not be the most eloquent person, and he may come across as a little rough around the edges at times, but Jan is always there with a huge smile, a good word for others, and contagious cheerful attitude. Jan is also a man with a set of challenges that many of us cannot even begin to appreciate, given our fairly privileged positions. He is someone who can do with a little help every now and then, because he works hard, when he gets work, but is not fortunate enough to have a steady job.

Jan was mugged recently returning from a run. What little he had, and it really was not much, was taken from him. At this time he does not even have a pair of shoes to run in. It is Jan’s birthday on 27 August, and Jan thinks that the best birthday ever would be going to the Spur… because he knows someone who once went there! Jan is also an avid rugby fan, but needless to say, never gets to go.

So here’s my request….

I would like to get Jan a pair of shoes, take him to the Spur and take him to the Lions rugby game at Ellis Park on the Friday evening before his birthday. But I would like to extend the invitation to all the Boskruin runners: If you would like to contribute a few rand towards shoes, that would be great. If there is money left over, it will be put toward his meal at the Spur. Whatever we can raise will be used to help make Jan’s birthday very special for him, even though for the rest of us it may seem quite ordinary. For Jan it will be something to remember.

I have season tickets to Ellis Park and will take him to the Lions versus Boland game the Friday evening from 17:00. We will go to the Spur at Northgate after the game at around 8:00pm. If anyone would like to contribute financially, it would be wonderful. But if you would like to join us and help make Jan’s birthday meal at the Spur memorable, that would be amazing. If you can’t make it, I will pass your wishes on to him, and if you have any other thoughts or ideas on making this man’s birthday something memorable for him, please let me know. Thank you for your consideration.

That mail motivated a number of runners to make donations, and on the 31st of August, Mornay was able to report back on ‘Jan’s Totally Fabulous Birthday Bash:’

I just wanted to drop you a final mail thanking you once again for your participation and contribution toward making Jan Alwyn’s birthday something special, and to share some of the moments with you.

We got to Ellis Park nice and early on Friday, and Jan had no idea what was happening when we took him into the Lions fan shop. He was wearing an orange shirt, as that was the closest to a red shirt he had. I invited Jan to see if he could find a shirt that he liked, and was met with an expression you would normally associate with Christmas time on the face of a small boy. He added a Lions beanie and after paying, the shopkeeper encouraged Jan to take his orange shirt off and to wear his new Lions kit right there and then, which he duly did.

We have some great seats and Jan was mesmerised by the stadium and anticipation of what was to come. It wasn’t long before we were tucking into our biltong and dry wors, with Jan starting out reservedly, but later getting comfortably into the snacks. The Coke and popcorn guys did well from us too! At halftime the girls set off and returned with a tray of mini-donuts. These did not last long at all, either. By now Jan was grinning ear to ear, with the reddest cheeks you can imagine on a grown man. The rugby result was favourable for our Lions and we left the stadium satisfied… and still hungry, would you believe!

We made our way to the Northgate Spur where Werner and Michelle were keeping the seats warm. A short while later we were joined by the effervescent Karl-Heinz and the party was on. We gave Jan some of his presents, and I don’t think he could believe his eyes or ears. Werner helped him set up his TomTom running watch right there and then, and our runners’ diets were forgotten as double milkshakes, Don Pedro’s and wine glasses were refilled, followed by the food orders, including the famously ‘low calorie’ chilli popper starters. Jan ordered a double rib burger and did not say a word as he worked his way through it until it was all done. What a pleasure to see someone enjoy a burger that much!

As is customary at the Spur, we informed our waiter that we were celebrating Jan’s birthday. It didn’t take them long to rustle up a crew and they arrived with a tall ice cream and sparkler for the birthday boy. Seeing Jan dispatch his ice cream had us all ordering Pecan Nut Sundae’s, and to our surprise, Jan raised his hand for one too, as well as a round of Jaegermeisters for the thirsty partiers. Some of us did not finish our Sundaes, and Jan volunteered to deal with the leftovers instead of having it go to waste in the kitchen.

Jan’s birthday bash did not end there. Thanks to your overwhelming generosity, there was still a sum of money left over, so I called Jan on Tuesday to find out if he was busy. He said he was getting ready to ride his bicycle to Randburg Harriers Clubhouse to do track training with Clint. Jan cycles two hours each way to come run with us, because he now lives in Witpoortjie, where he is house-sitting after his previous accommodation arrangement came to an end. This is why we don’t see him as much lately, as a 5am run means a 3am start for him!

I drove to pick him up and took him to Sportmans Warehouse, where Jan chose a couple of technical running shirts, as well as a couple pairs of shorts and super comfortable Falke socks. We then drove to training, and I took the opportunity to take some photos of Jan sporting his new kit. He also mentioned two races in particular that he would like to enter in the near future, the SABS Jakaranda Marathon as well as a half marathon in Vanderbijl, and thanks to you, there was enough money left over for us to pay for these entries on his behalf, too!

All in all, we managed to get all of this for Jan:
• 2 pairs of Asics shoes. (We gave him the first pair at the Spur, and the second pair is being kept at Randburg Runner for Jan for when he needs it. We’re hoping that he will be able to run Comrades 2017 in the second pair.)
• A TomTom running watch (a nearly new unit donated by one of our group angels.)
• A Lions rugby shirt and beanie
• 2 technical running shirts
• 2 pairs of running shorts
• 3 pairs of Falke running socks
• 2 race entries
• And an amazing night out at the Spur!

Driving back to Jan’s place to drop him off, I realised how blessed we are. Some of us have so many material possessions, while others have so little. It reminded me of a post I read: “When you are blessed with abundance, don’t build taller walls, build longer dinner tables.” It was my privilege to share Jan’s birthday with him and a few other Boskruin running friends, and I know that I am the wealthier for it, as are each of you with your well wishes, your words of support as well as your contributions. I am proud to be associated with you, while humbled by your kindness and love for your neighbour.