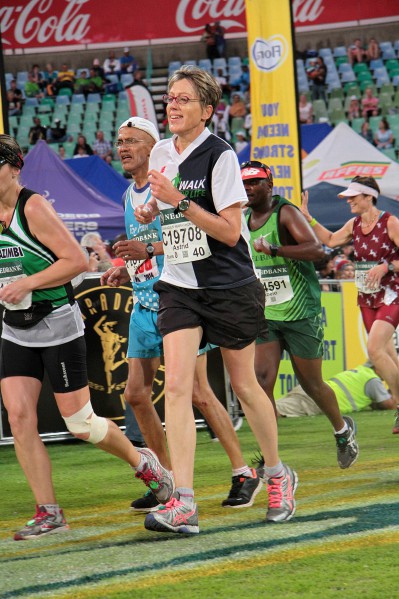 From walking my first marathon through the dusty streets of Soweto in 2011, I continued what for me was my ‘Long Walk to Freedom,’ and completed the Ultimate Human Race, the Comrades Marathon in 2014. That same year I achieved another big goal, the New York City Marathon! Here is my story – BY ASTRID THOLE

I stood alongside 2000 other runners on a blisteringly hot day in Soweto on the 6th of November 2011, ready to take on the big challenge of walking my first marathon. Just to put you in the picture, I wasn’t a runner, I was a social, casual walker who had walked a few 30km races for fun. On the start line I had no idea what the race would entail, all I knew was that I planned to walk very fast, because I wanted to finish before the cut-off time of 6h30.

As the gun went bang, I set off, hundreds of runners sprinted past me. I felt scared and excited at the same time, and I was a mixed bag of emotions. I had no idea how hard it would be to walk 42km, and as I went through the tough route I discovered how hard it actually is! To say I was naïve was an understatement, yet, at the time I believed I could complete the race within the cut-off time.

So I walked and walked and walked. I had no idea about pacing, gels, hydration, splits, and all the other lingo that runners spoke and understood so well. I stopped and drank water at every table and soaked up the amazing vibe that is so well known at the Soweto Marathon, the ‘People’s Race.’ The friendliness that the people of Soweto show to each and every participant is overwhelming, making the race a special one.

ELATION IN SOWETO
I completed the race in a time of 6:15:48! I was absolutely elated when I received my beautiful medal, I felt such pride and excitement, I had done it. I was reminded of a quote from Fred Lebow, the founder of the New York City Marathon, “It doesn’t matter whether you come in first, in the middle of the pack, or last. You can say, ‘I have finished.’ There is a lot of satisfaction in that.” The whole experience proved to me that the body achieves what the mind believes and that I was not too old to set another goal and dream another dream.

That afternoon, inspired by my achievement, I watched the live broadcast of the 2011 New York City Marathon. I was glued to my TV, fascinated by the number of people who were participating – over 50,000 people! During the broadcast I decided that I would be setting some personal goals and dreams into action: I would do my first Comrades and NYC marathon in 2014, the year I turned 50, a milestone birthday for me, and what better gift than two medals, from Comrades and NYC.

So with that my running journey began, I joined a running club and started doing the hard work. In the beginning the transition from social walker to runner was a hard one, especially since I had never run a kilometre before the age of 48. I soon realised that to qualify for Comrades I would have to run/walk faster. I was lucky to be supported by another Comrades Runner at my club, Mike, and he pushed me and guided me to my goal. I always remember what he said to me, “Astrid, never give up. Give every part of the training your all. You can do it. Comrades is not for the faint-hearted, it’s tough, but you can do it. You will get your first medal in 2014, but you have to work for it and want it.”

THE ULTIMATE RACE
A lot of blood, sweat, tears and sacrifices later, I made it to the start in Pietermaritzburg on 1 June 2014. I lined up in my seeding pen with 18,500 runners around me. The pressure was on, this was not just any marathon, it was The Ultimate Human Race, a long and gruelling 89.2km awaited me. I prayed fervently before the start to finish in under 12 hours, to have the strength, faith, guts and determination to keep going…

My incredible journey from Pietermaritzburg to Durban began, and while running, I just kept saying to myself, “You were strong enough to get this far. You are strong enough to keep going. It doesn’t matter how fast or slow you are. As long as you keep moving.” I ran, I walked, I never stopped, and I had a wonderful first Comrades. No nausea, blisters, vomiting, dehydration or over-hydration, I was on a high from the first to the last kilometre.

I had written many positive affirmations which I took with me and I read and repeated these to myself all 90km. I needed to believe that I could and would finish, and I had to dig deep many times. Comrades tests your mental toughness, but I kept running despite the fatigue, pain and discomfort, and all around me runners kept motivating me, and that got me to the finish. I received my first Vic Clapham medal in a time of 11:40:03. To this day I cannot describe the emotions that I felt on that day!

A BITE OF THE BIG APPLE
Five months later, on Sunday 2 November 2014, I stood on the start line of the iconic and famous New York City Marathon. It was bitterly cold, three degrees with a head wind, and I was nervous as I was not used to running in such cold conditions, but I didn’t let it dampen my spirits. It was an out of this world experience, lining up alongside 50,869 runners, some of whom were elite international marathon runners, was amazing and surreal, and to participate in one of the world’s five major marathons was a dream come true. I was about to sight-see and experience the famous ‘city that never sleeps’ on foot, what an amazing adventure.

Donned in warm winter running gear with a South African running vest displaying my name, I set off to the sound of Frank Sinatra’s New York, New York, and it was magical, just as I watched on TV all those years ago, only now I was one of the 50,000-plus runners streaming across the Verrazano Narrows Bridge. Running the NYC marathon was everything and more than I dreamt it would be. I was overcome with emotion as the crowds shouted out my name and told me to keep going – they love South African runners and kept saying, “Astrid, you come from Mandela’s beautiful country, you must be so proud!” I did indeed feel proud and humbled to be representing my country, and the support I got from the American crowd was extra special. Then finishing in 5:15:45 in the world famous Central Park was something that I will never forget. I was so proud when they handed me that medal.

The experiences I had were extraordinary and so memorable, and to this day the NYC Marathon remains one of my all-time favourite marathons. What started with walking the Soweto Marathon ended three years later with Comrades and NYC Marathon medals! It just goes to show that if you can dream it, you can achieve it! And I am still dreaming… I have a few more goals to reach, including the Berlin Marathon, and aiming for my green number at Comrades before I hit 60.