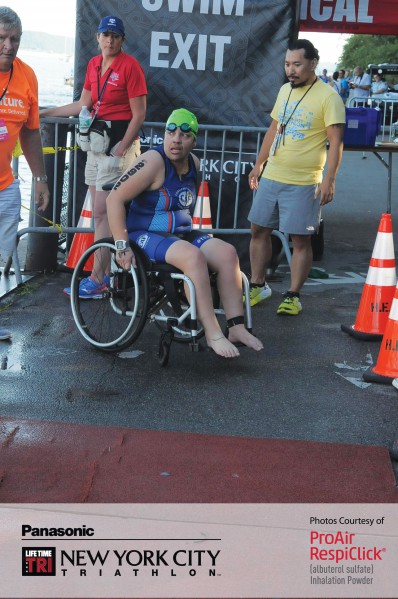 If I wasn’t living in Cape Town, I would be living in New York, that’s for sure! And if you had said to me a year ago that I would be racing the New York City Triathlon, just one year after I had started training seriously to do triathlons with just my arms, I probably would have thought no, maybe give it another year, say 2017, then I could consider New York. But within the span of 12 months I had raced nine triathlons, and then it all came together for me to stretch my limits and take on my first international race, in a city that definitely doesn’t sleep, and where dreams are made for sure! – BY CATHERINE VAN STADEN

The week leading up to the race, I got to do some amazing training rides, one around Central Park in my wheelchair and another along the Hudson River on my hand cycle. No swimming yet in the Hudson River… I was saving that treat for race day! The weekend of the race was filled with the expo, registration, parathlete briefing meetings, and social breakfasts with the other 30-odd parathletes with various forms of disabilities, all coming together to see how far we could dream!

My dad and my friend Joanne were my handlers (or ‘slaves’) for race day, but also the day before, because getting all my equipment down to transition is no small task, and all hands that can work are pulled in! Both of them earned their weight in gold coming to support me, and they did it without ever complaining once! It was a very real moment finding my name on the board, amongst all the other athletes, and Joanne thought so too!

THIS IS THE DAY…
Waking up on race morning was strange, because for the first time in all the races I have done I did not feel nervous or anxious, or wonder will I finish this one. There was a definite sense that this is the dream, this is the goal and this is the day, so let’s go get it! The swim was 1.5km down the Hudson River, which meant we first had to walk about 2km up to the start. They had predicted a very hot day, and it was already getting hot, so they shortened the run route by 2km due to heat even before the start of the race.

Just after 7am, the PT1 hand cyclist/wheelchair athletes jumped into the river and off we went. I came out with a time of 29 minutes, and mud all over my face! Then it was run the 500 metres to transition and onto my hand-cycle. So they had said the 40km ride was rolling hills, and let’s just say they didn’t lie. This was a long ride, and there was not one flat piece of road. On one hill, my watch said I was going down it at a speed of 85km/hour. I wasn’t concerned about the speed – that was fun – but what I was concerned about is that what goes down must come up, and I would have to come back up this hill!

One one stretch of road I got to, it was quiet, no-one else, all alone with my hills and my thoughts. Then in the distance I saw a policeman get out of his car and walk towards the centre of the road. As I got close to him, he stood to attention and saluted me as I rode past him. I was totally taken aback, it gave me tears, but an added motivation to just keep going for some more hills!

FEELING DEFLATED
I came into transition after three hours of being on the road and it was straight into my racing wheelchair to tackle the run, but as I was about to take off, something felt strange when I pushed my chair. It wasn’t smooth as it usually is, and suddenly I realised my front wheel was as flat as a pancake. In my head I thought I can’t believe this, to have come all the way to New York and I won’t finish because of a flat tyre. At this point most of the athletes were finished, already making their way back to get their equipment in transition, and here I was stuck. My dad ran off to go find a pump, while Joanne stood waiting with me, and I thought, but what if it’s a puncture, a hole, and therefore having a pump won’t make a difference? I turned, looked at Joanne and said, “I am going, flat wheel and all. Just tell my dad,” and off I went.

The first section of the run is three blocks of four lanes, going up 72nd Street towards Central Park. I got into the centre of the road and started pushing my way up the blocks. This was the moment that was so unexpected for me, because as I did this, I had athletes, spectators and anyone around suddenly start cheering for me and clapping, and that’s when I realised this was the moment, this was the time in life when we can decide to keep going, no matter what, or stop. I pushed the 4km on a flat wheel, I have no idea how, but I just did it.

Due to the heat and because I was just too late, I was cut short on the run and marshalled straight to the finish line, so I didn’t get to finish the entire run course, but I did go through that finish line with a total time of four hours 11 minutes, collect my medal, and with a determined mind, tell myself this is only the beginning!

THROUGH THE DOOR
New York was real, although at the moment it feels like I just woke up from a dream. It’s the reality versus the dream, and the reality of the dream that is a journey on its own. And so, after 12 months, 10 races, bigger arms, bigger heart, and a determined mind, I have to say that I haven’t arrived yet. Instead, what I have done is open a door that will lead me to many other doors. A door that wasn’t locked, a door that was waiting to be opened, and in the midst of all that was trying to keep it shut, I pushed it open and rolled right through!

Ed’s Note: We first wrote about 36-year-old capetonian Catherine van Staden in our February 2016 edition. She suffers from Hereditary Spastic Paralysis, a degenerative condition also suffered by her late mother and her aunt, and in December last year she achieved her goal of becoming the first South African female para-triathlete to complete a long distance triathlon event using just her arms.