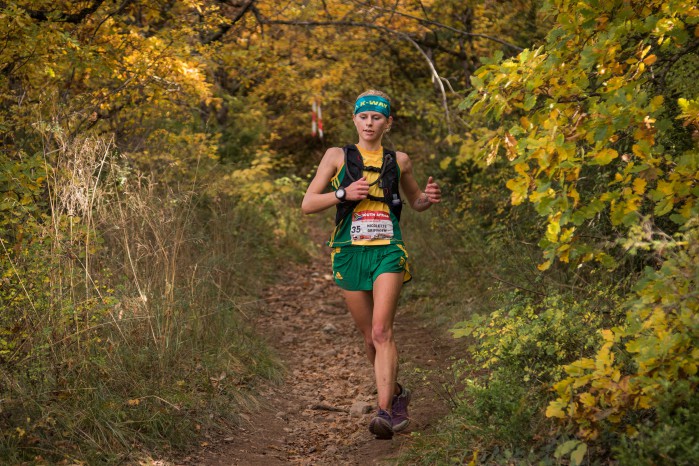 The 2016 South African Ultra Distance Trail Champs race will long be remembered by those who participated as one of those four-seasons-in-one-day experiences. In fact, it was more like four seasons per hour at times, as the weather over Cape Town went a bit crazy, but that couldn’t stop Nicolette Griffioen from retaining her SA Champs title and adding to her already impressive list of trail running honours. – BY SEAN FALCONER

This year’s Hout Bay Trail Challenge at the end of July featured the traditional 40km route as well as an extended 68km ultra route designed specially to host the SA Ultra Trail Champs, and the already tough course was made still more challenging by the weather. “Those were really tough running conditions,” says 23-year-old Nicolette, looking back on the race, which also served as a final Trail SA qualifier for the World Ultra Trail Champs in Portugal on 29 October.

“It was drizzling when we started down in Hout Bay, then stopped and it got hot, so the layers of clothing came off. Then when I was on Table Mountain, heading towards Platteklip Gorge, it started to rain and hail, but I thought I was close enough to Platteklip and the descent, so I didn’t put on my jacket. But it took me another 30 minutes to get there, and by then I was frozen. I wasn’t wearing gloves and my fingers were so cold that I couldn’t tie my shoelaces properly. I also slipped and fell a few times. I actually thought about pulling out of the race, but at the bottom of Platteklip the sun came out and I warmed up again, and it was quite warm going up Kasteelpoort, so I was able to finish strongly.”

Star of SA Trail
Nicolette has built up a terrific list of wins in top level trail races since she took up the sport after school. In 2011 she posted her first big win at the Dryland Traverse three-day stage race and has run the ‘Grail of Trail’ Otter African Marathon five times, with a best position of second. Her first ultra win came in her first ultra outing, at the inaugural 100km Ultra Trail Cape Town in 2014, and the following year saw her win the Num Num Trail and Crazy Store Magalies Challenges, plus finish second women’s team alongside teammate Carla van Huysteen at the AfricanX three-day stage race.

Her latest win in Hout Bay saw Nicolette retain the SA Ultra Trail Champs title that she won in 2015 at the 80km Ultra Trail Mount Moody Run in Mpumalanga, in the same year that she also finished second in the SA Long Distance Champs at the 32km Molweni Trail Run in KwaZulu-Natal. This year has been even more successful, as she also won the 2016 SA Long Distance Champs title earlier this year, at the Drakensberg Northern Trail Skyrunning 40km event in KZN, giving her the SA Champs ‘double’ in 2016 and also making her the first SA woman to win both national titles.

This success on the national stage has seen her selected twice to represent SA on the world stage. In 2015 she went to the ultra-distance IAU Trail World Champs in Annecy, France, where she came home 24th after 85km and was the best-placed South African female finisher. Then in 2016 she came home fifth at the 42km WMRA World Long Distance Mountain Running Champs in Podbrdo, Slovenia, posting the highest finish ever by an SA athlete in a World Champs event. She was also taken to France last year for the 76km Le Grand Trail Des Templiers race as part of an SA development team, to pick up more experience of trail running on the world stage. “I loved Templiers – I finished sixth and it was probably my best race so far,” she says.

Humble Heroine
With trademark humility, Nicolette says that it is an incredible feeling to win titles, represent her country and do well overseas, but that isn’t what drives her running passion. “I’m not title-driven or orientated, and I don’t put a lot of pressure on myself, so I just go overseas to enjoy the running experience and get the best possible result. But it’s still great to represent your country and know you have so many people back home supporting you.”

Unfortunately, a heavy academic programme in her third-year veterinary studies this year will prevent Nicolette from going to Portugal, as she writes her biggest exam on the day before the World Champs race takes place, and she does not want to move the exam as that will create a high-pressure log-jam in her exam programme. However, she should be back in contention for the three different World Champs events next year, all of which will take place in Italy. When asked which World Champs races she prefers, Nicolette says she is up for any challenge, but does hanker towards the marathon-length races. “I did better at the Long Distance Champs thanks to the experience I picked up in the past year, but I am not sure I can get a similar result in the Ultra Champs – that’s a lot more of a mental race.”

Late Bloomer
It’s strange to think that Nicolette was not very active at school, apart from playing hockey. “I hated athletics! The real change was when I took a gap year after changing my course to veterinary science and I went to gym a lot, became a spinning instructor and did some running on the treadmill.” Then she entered her first race, a 10km trail run, and picked up third place, and that was her hooked. She moved up to 30km races, then ran the Otter Trail Marathon, and that led to an invite to the 100km Cape Town Ultra Trail, which showed her that she has the mental capacity to stick it out in the longer races. “After 50km, you know that you’re actually heading back towards the finish, so there’s no pulling out then, and I’m far too competitive to quit, anyway. Those last 20km were the longest of my life, though!”

Fortunately, Nicolette has no problems with finding motivation for training. She lives on a smallholding next to Oori Nature Reserve in the Rhenosterspruit area near Lanseria, which provides a convenient base for trail training and where she first took up running with the family dogs. And these days, she says it is her four-year-old rescue ‘Trail-dog,’ Dobby, that really gets her moving. “My dog is obsessed with running! From four o’clock, she starts scratching on the door – there’s a hole in the door from her enthusiasm – so it’s always a given that she’s out with me. I love sharing her pure joy at being free!”

Exams Before Race
Looking ahead, Nicolette says her studies will be her priority for the next three years, while she will just keep doing her best in her running. “I would like to get my degree, then turn pro runner for a few years with the security of knowing I have a job to come back to. Right now, I would prefer to be a pro athlete, but I have to be realistic, I can’t run for the rest of my life, so I need something to fall back on.”

She also intends racing less in the coming years. “Last year I did a lot of racing and got tired of all the time and effort travelling, so going forward I will choose the races that I think I will enjoy, like the Otter and Skyrun, because it’s not just about titles. I love getting over rocks, descending, going through rivers, tackling obstacles, and I have no fear when it comes to running the technical courses, so I will look for courses that offer that. I want to experience new places and routes, while also trying to stay injury-free after being out for three months at the end of last year with ITB.”

“I also like to mix up the distances and the sports, which is why I like doing the XTERRA triathlons at the beginning of each year,” says Nicolette, who finished fourth at the XTERRA SA Champs in Grabouw in 2015 and fifth in 2016. “I would like to qualify for the XTERRA World Champs in Hawaii, but it all comes down to the swim leg, which is my weakest discipline. I do swim a lot, three times a week, and enjoy it as active recovery from running and cycling. so I am hoping that will maintain my swimming fitness, and then in the two months leading up to the XTERRA SA Champs I will do more intensive speed swim training. But trail running will remain my sporting focus.