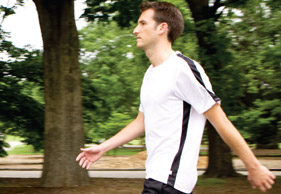 Four-letter words are considered taboo in polite company, and the word ‘walk’ is the ultimate four letter word for runners. The mere thought of walking during a race is enough to make some runners break out in a cold sweat, but including a bit of race-walking in your training may just be the key to racing success.

In a former life, I was a runner. I bought the shoes, read the magazines, ran the races and trained about 75km's per week. For my dedication, I ran times in the mid-17s for 5km. These days I’m perfectly content to zip through life as a race-walker, but occasionally I get a wild moment and enter a running race – just to see what will happen. And what usually happens is that I run in the mid-17s for 5km. No better or worse than in high school, but at least now I don’t waste my time with those 75km's per week of running.

Now don’t get me wrong; I treat the race just as seriously as everyone else. I’ll wear my favourite shorts and racing vest. I’ll lace up my best racing flats and take part in the same pre-race rituals as the other runners. I just don’t bother doing any more than about 4km of easy jogging per week – about 500 metres at a time – as part of my daily pre-race-walking warm-up.

How, then, can I run times that would place me among the top ten in most local fun runs? Natural ability? Hardly. Youthful energy? Please, I’m in my 30s now, for crying out loud. What then? I know you don’t want to hear it, but it’s the walking.

REAP THE BENEFITS
Race-walking is an unparalleled aerobic conditioner, yet it’s much easier on the body than running. By cutting back on their running mileage – and making up for the difference with quality race-walking workouts – many runners have remained injury-free and improved their running times dramatically.

Over the years I’ve taught dozens of injured runners to race-walk so they could train through their running injuries. Many of them have come back to me with stories of big PBs after weeks, or even months, of sharply reduced running training. I’ve also taught several ultra-marathoners to race-walk so they would have an advantage over their unenlightened competitors who inevitably must walk for long stretches during six-day runs. Again, huge PBs.

It wouldn’t be a stretch to say that race-walking is by far the best substitute activity for injured runners. But why wait for an injury? More than just being a very good for cross-training, race-walking is terrific crossover training. The two are similar enough that training for one will prepare one to achieve very
good results in the other.

This isn’t the case with most other sports. Triathletes, for example, couldn’t possibly train solely on the bike; they need to swim and run, too, because the individual disciplines are so different that there is very little crossover training effect among them.

Race-walking appears to be unique in that runners don’t seem to have to do much ‘re-wiring’ to convert their race-walking fitness to running fitness. Add to that the reduced chance of injury and you have the ‘holy grail’ that runners have been searching for – supplemental, low-impact exercise that can directly improve their running.

IT’S IN THE TECHNIQUE
The first step is learning exactly what race-walking is. When it first appeared in the Olympics in 1908 it really was nothing more than fast walking. But if you’ve ever tried fitness walking for speed, you’ve probably discovered that there’s a rather low threshold of pace beyond which technique can become
extremely awkward – so much so that most people can’t walk any faster than about a 7min/km pace, no matter how hard they try.

But race-walking is a different animal. It has evolved over the years from mere fast walking to become a speedy, fluid athletic event. Elite race-walkers can walk 5km in under 20 minutes, and a marathon in just over three hours. That’s faster than 4min/km!

The rules that prevent race-walkers from running are actually part of the reason why the technique is so efficient – and so much easier on the body than running. The first rule says that race-walkers must keep one foot on the ground at all times. Occasionally, an athlete may come off the ground a bit with each stride, but not so much that it can be detected by the human eye since judges are placed all along the course to watch for infractions. Because race-walkers stay so low to the ground, they’re much less likely to suffer the high-impact injuries that befall so many runners.

The other rule states that walkers must keep their knees straight from the moment the heel of the  advancing leg hits the ground until that leg passes directly under the body. That may sound a little strange, but the straight leg not only provides the leverage that propels race-walkers forward so quickly but also keeps the knee safe from many of the torsional injuries that runners commonly suffer.

GET THE FEELING
To get an idea of what race-walking feels like, simply stand in place with your feet together and your arms held by your sides with the elbows bent at 90 degrees. Now pump your knees forward and back while keeping your feet flat on the ground, with your weight on your heels. Each time you pull your knee back, your leg will straighten under your body just as it will when you’re race-walking.

Now all you need to do is add some stride length by stepping forward a bit with either foot each time you pump your knees. Just be sure to land on your heels, otherwise your knees will probably bend when your foot hits the ground. Concentrate on taking short, quick steps, rather than long, slow strides. If you do that, you’ll have an easier time keeping your knees straight, and you’ll expend much less energy. As you get stronger, your stride should get longer – but make sure the extra stride length is behind your body; keep it short in front.

Doing the knee pumps walk on a very gradual hill will make it even easier to pick up the technique. And once you have it, you can get faster by pumping your arms and driving your knees more vigorously to give yourself a longer, more powerful stride. Try it!

TRAINING TIME
Too much of a good thing can lead to problems, and where running is concerned that means injuries. There are a number of causes of running injuries, but running too many kilometres and running with a poor technique are the most common. Adding race-walking to your training programme may be a way to limit both of these risks while improving your overall fitness.

Stress and adaptation are the keys to success in an endurance activity like running. To improve as a runner, you must stress all the physiological systems your body will use during a race. Then you need to allow those systems to recover from the stress so your body can build itself up again, becoming stronger than it was before the hard training.

But too many runners push too hard on their easy days, pounding the same muscles day in and day out so they never fully recover. Without full recovery, you won’t be able to train as hard as you need to on your hard days. That’s where race-walking comes in. With race-walking you get a great cardiovascular workout without banging up your running muscles.