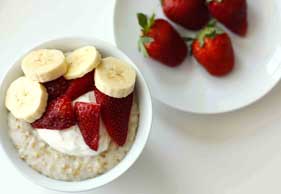 Oats date back over two thousand years, cultivated in regions all over the world. Before humans used it as part of a nutritious breakfast, oats were used for medicinal purposes, a use for which they are still honoured today. High in phosphorus, selenium and manganese, oats are also the go-to for soluble dietary fibre, iron, magnesium and vitamin B.

Oats gain part of their distinctive flavour from the roasting process after being harvested and cleaned. Although oats are then hulled, this process does not strip away their bran and their germ, allowing them to retain a concentrated source of their fibre and nutrients. Different processes are used to produce various forms of oat products, which are generally used to make breakfast cereals, baked goods, soups and stews:

?         Oat Groats: A groat is another name for a grain kernel. Oat groats are the result of simply harvesting oats, cleaning them, and removing their inedible hulls. They take the longest to cook.

?         Steel-cut oats: Featuring a dense and chewy texture, they are produced by running oat groats through steel blades that thinly slices them into smaller pieces.

?         Old-fashioned (rolled) oats: Have a flatter shape that is the result of their being steamed and then rolled into flakes.

?         Quick-cooking oats: Processed like old-fashioned oats, except they are cut finely before rolling.

?         Instant oatmeal: Produced by partially cooking the grains and then rolling them very thin to decrease the cooking time. They are lower in fibre than rolled oats. Oftentimes, sugar, salt and other ingredients are added to make the finished product. Try to avoid flavoured instant oatmeal!

?         Oat bran: The outer layer of the grain that resides under the hull. While oat bran is found in rolled oats and steel-cut oats, it may also be purchased as a separate product that can be added to recipes or cooked to make a hot cereal. This is your best option, as it is very high in fibre.

?         Oat flour: Finer than oatmeal, this is made by grinding and sieving oats. It can be used in baking, or for thickening soups and stews.

Here are three great reasons to add oats to your daily eating plan:

Eating oatmeal can lower your cholesterol, especially your low-density lipoproteins (LDL) or ‘bad’ cholesterol. If you've been diagnosed with high cholesterol, consider adding oatmeal to your daily menu. Oatmeal is full of soluble fibre, which we know lowers LDL levels. When you digest fibre, it becomes goo-like. Researchers have determined that when it's in your intestines, it ‘sticks’ to cholesterol, stopping it from being absorbed. So instead of getting that cholesterol into your system – and your arteries – you simply get rid of it as waste.

Due to oatmeal being a wonderful source of fibre, it means that when you eat oats for breakfast, you're going to feel full for a long time. Breakfast foods high in sugar and fat can make you feel full for only a brief period. A bowl of steamy oats or a breakfast smoothie, consisting of blended oats, fresh fruit and ice, can satisfy your hunger for longer.

?         All adults should consume 25 to 35g of fibre a day. The average South African barely gets to 15g. One cup of cooked oats will supply you with approximately 4g of fibre.

?         Adding some fresh fruit with high fibre content (apple, pear, raspberries and blueberries) could increase the fibre count even more!

?         Combining ? a cup of fresh fruit or a small handful of nuts with your oats, while they're cooking adds more flavour and nutrients. Spices like cinnamon and nutmeg give great flavour to your oats. Limit any additional sugar and let the natural flavour of the fruits and spices take over.