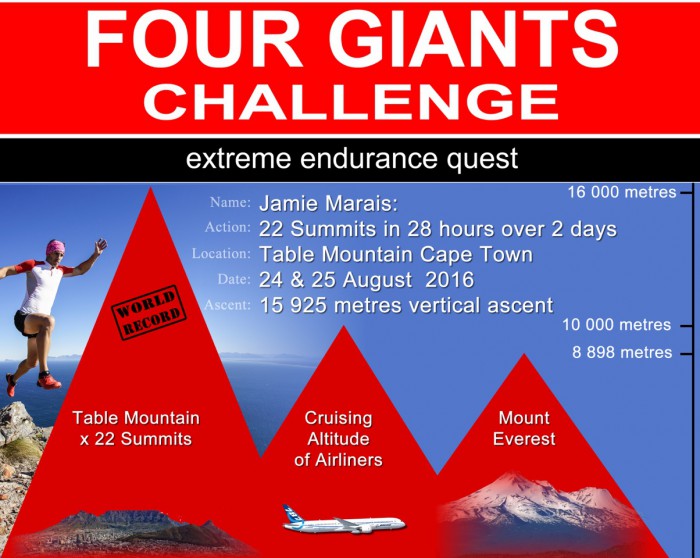 “All of us face Giants, but no Giant is too big to face” – Jamie Marais.

24 summits of Table Mountain in 48 hours. A Guinness World Record attempt for the greatest vertical height on a bicycle. Paddling the 676km length of the longest lake in the world on a stand up paddle board. A speed ascent/descent of the highest mountain in Africa.

These are the “giants” that professional athlete Jamie Marais from Cape Town will be facing in 2016. “South Africa is currently facing massive challenges. Many people have lost hope and depression is currently one of the leading causes of death because people simply cannot cope with the challenges of life and difficult personal circumstances,” says Jamie.

As a response, Jamie decided to look for four of the biggest physical challenges he could find in South and Central Africa, which he will face using various sporting disciplines. The challenges are extremely tough and most have never been attempted before. He hopes to inspire people to realise that “no giant is too big to face” as well as raise funds for the Sabrina Love Foundation who care for children with special needs.

“I wanted to use my physical ability to help people with a physical disability, people who could never do sort of things many of us do without even thinking on a day to day basis,” says Jamie.

On the 20th of June 2016, Jamie made history by becoming the first person to ever run up and down Lions Head in Cape Town for twelve consecutive hours, summiting twelve times and thus achieving the greatest number of consecutive summits of Lions Head ever recorded.

Running up and down the steep, loose, rocky climb of Lions Head, nonstop, for twelve hours, Jamie covered more than 60 kilometres straight up and down in the process with almost five thousand meters of vertical gain.

“I was pretty tired afterwards, but very happy”, said Jamie. “This was actually part of my training to test myself and see how my body responds to prolonged extreme physical effort.”

Jamie’s twelve summits of Lions Head is the most number of consecutive summits ever recorded. The four extreme challenges Jamie is training for, collectively referred to as the “Four Giants Challenge” take place over a period of approximately 6 to 12 months in iconic but challenging natural settings such as Table Mountain, Du Toits Kloof Pass, Mount Kilimanjaro and Lake Tanganyika, the longest lake in the world.

Jamie’s first challenge will be to run up Table Mountain 24 times in 48 hours, resulting in approximately 72km of vertical running and a staggering vertical ascent of over 18000 meters – twice the height of Everest. His second challenge will be an official Guinness World Record Attempt for the greatest vertical height on a bicycle in 12 hours.

Jamie will achieve this by cycling up and down a mountain pass as many times as possible in a 12-hour period. He will then face the third Giant, Lake Tanganyika in Tanzania, where he faces the immense challenge of crossing the 676km lake on a stand up paddle board, becoming the first person in history to ever attempt this.

With storm-driven waves of up to 6 meters, large colonies of hippos and some of the largest recorded crocodiles in the world, Lake Tanganyika is an incredibly dangerous place and paddling for 10 to 14 days consecutively on a stand up paddle board is a formidable challenge.

Finally, Jamie will travel to Kenya where he will attempt a speed ascent/descent of Mount Kilimanjaro – the highest mountain in Africa – which he hopes to run up and down in under 10 hours. As a man who has overcome tremendous personal challenges including his own personal battle against drugs as a teenager.

Jamie, now forty years of age, has been married for sixteen years and has three children and believes that “no giant is too big to face” and anything is possible. Now, Jamie has made history by becoming the first person to climb the iconic Table Mountain a staggering 22 times in 28 hours, ascending nearly twice the height of Everest and climbing 16000 vertical meters, effectively setting a world record for the greatest number of summits of Table Mountain ever attempted over two days.

This immense challenge was the first of four extreme solo challenges Jamie is taking on to inspire South Africans to believe in themselves and to raise awareness and support for Sabrina Love Foundation, who care for children with special needs.

“I am ecstatically happy with this achievement and could not have done this without the help of the incredible team of support crew who volunteered on the day, and all of our partners and sponsors,” says Jamie.

“I suffered incredibly from the very first summit as I had been experiencing pain in my right ITB and hip flexor. From the first ascent I was literally limping across the top of Table Mountain to the cable car which shuttled me back down after each summit, and to be honest, I wasn’t even sure I would be able to complete more than five summits based on how extreme my pain was.”

Waking up on day two, Jamie was absolutely knackered, but up ready to face the mountain again. On his very first ascent, about 50m up the climb, Jamie’s whole body packed up and he was doubled over on the trail with tears streaming down his face wondering how on earth he was going to keep climbing the mountain over and over for another fourteen hours.

“To be honest, I wasn’t even sure I would make it to the top of that 13th summit. On summits 13 and 14, I moved through a deep, dark tunnel and finally emerged into summit 15 feeling much better.”

Jamie attributes this achievement – a world first – to his strong faith, excellent support team and his ability to push through pain.

“This was a team effort and there is absolutely no way that I would have been able to do this without the help and support of Patrick Cromwell from Awesome South Africans, Tony and Suzy Lubner, Jane Pitchford and Kirsten Rowlands representing Sabrina Love Foundation, my wife, brothers, friends, cousins and amazing support crew, Wahida Parker, Mike Williams and the entire staff of Table Mountain Aerial Cable Way, SANParks, ER24 paramedics Joshua and Grant, Grant the amazing ECO from NCC Environmental Services and all our incredible sponsors for this challenge – Barloworld Toyota, Salomon SA, Suunto SA, RaceFood, Compex SA, Spot Africa, TMAC, ER24, NCC, Awesome South Africans, Bester Physiotherapy, Caitlin Payne Sports Massage and our incredible photographer on location, Julian Goldswaine.”

For more information on the Four Giants Extreme Endurance Challenge, click on the button below!