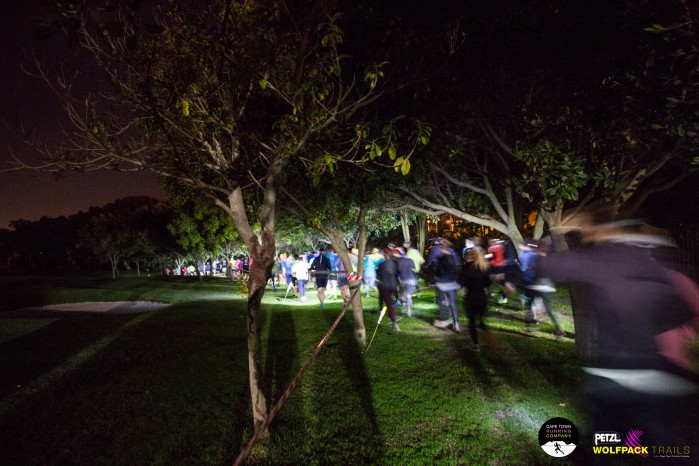 It’s the latest craze to sweep South African running, offering a fun challenge coupled with safety for night running, all rolled into one, thanks to various golf course night runs popping up on the running calendar. – BY KIM STEPHENS & SEAN FALCONER

Golf is a sport played during the day. The player steps up to the tee, swings the club a few times to practice and then sends the ball whizzing down the fairway in the direction of the flag on the green. It’s a relatively simple concept, but there is one thing that can stop a round of golf: Sunset. Because golf cannot be played at night. Therefore, as the sun goes down, so the golfers on the course wrap up their rounds and head for the clubhouse and the traditional 19th hole for a drink or two, while the fairways and greens are left to the darkness, awaiting the next day’s players. Well, not anymore…

These days you can drive past your local golf course on a week night and chances are you will see headlamps. Lots and lots of headlamps! That’s because more and more golf courses are opening their doors to runners for night races as more organisers tap into this lucrative new market, and more runners give night trail running a try. Most of these events are smallish, no more than 300 runners at a time, but man oh man are they fun! And judging by the number of these events being added to the calendar each month, the demand is only going to keep growing!

RUNNING WITH THE WOLVES
One of the companies putting on these golf course runs is the Cape Town Running Company, with its monthly Petzl Wolfpack Night Trail events. These are the same guys behind the Ultra-Trail Cape Town 100km and Batrun events, and one of the directors, regular trail runner Stuart McConnachie, provides some insight into the decision to launch the golf course series. “Discussions with fellow Cape-based trail junkies resulted in the realisation that the trail calendar is packed with events of every kind, but there was not much happening that echoed the road running time trial concept. Plenty of runners want to test their speed off-road, and many were looking for safe ways to explore trail running on non-technical courses,” he says.

“Night running holds particular appeal, but it’s a pretty daunting idea for many. We’ve seen similar concepts in other areas of South Africa, and decided that there was more than enough interest here in the Cape, so we started chatting to golf clubs and plenty have expressed a need to use their grounds for alternative activities that won’t affect their primary purpose. So Petzl Wolfpack Trails was launched, and it has been a radical success story to date. Rondebosch Golf Club was first, but we’re now at Stellenbosch and Durbanville, with a very exciting Hermanus event in the pipeline. They’ve even allowed us to cut sections of brand new single track for some of the events!”

NUMBERS GROWING
Just as the Petzl Wolfpack runs are growing, so too are other golf course runs. Also active in the Cape is Lans Pepler of On-Site Events with his Run the Greens events, usually between 5km and 10km in length, at the Bellville and Parow golf courses. He started Run the Vines in 2015, offering regular runs on various wine farms in the greater Paarl area, and this year saw a natural extension into golf courses for night runs, bringing his unique humour and fun-loving approach to a new running market. This series particularly encourages the participation of children and walkers.

Meanwhile, up in Gauteng Kinetic Events has been in the game a little longer, with Gautengers enjoying 8km and 4km races presented by Energizer at venues like the Parkview Golf Club, Bryanston Country Club, Woodmead Country Club and Randpark Golf Club. The fitCal Frostbite Night Run series has also been on the calendar for a year or two now, at the Country Club Johannesburg in Woodmead, and then there is the proverbial new kid on the block, Shane Gouldie, the ex-cricketer who took up trail running to overcome long-term cricketing injuries and ended up starting the Trail Adventures company. He is now putting on up to three golf course events per week all over the Gauteng area, thanks to starting up satellite franchises, with plans for more to come, so there will likely be still more golf course runs on the calendar in the near future!

SOMETHING NEW
Night runs on golf courses are an interesting hybrid of trail running and cross-country, since much of the routes that zig-zag up and down the fairways are on grass, with sections here and there on gravel roads and a small portion on paved roads or pathways. The routes of these runs are quite something to look at on a map, taking in every corner of a course while making sure to skirt around the off-limits greens, and a route organiser can easily put together a 5km to 8km ‘loop’ on any given course.

Of course, a good headlamp is the one essential of these night runs, as runners need to see the ground up to a few metres ahead in order to run freely and confidently. Many a runner has realised after just a few metres of running that the little headlamp they got at Christmas is fine for reading or braaing when they go camping, but doesn’t quite light the way enough for a night run!

While some trail purists might turn up their noses at the idea of a run around a golf course, these event companies have definitely captured an enthusiastic audience, including a fair number of ‘roadies’ taking their first steps off-road, in a safe and fun environment that doesn’t require top-level technical trail running skills. As one female newbie to trail said after the first Petzl Wolfpack run, “For a moment I panicked, but I quickly realised I was safe, and that is exactly what I wanted from the evening, to run alone at night and not feel threatened.”

Even the pro’s are enjoying these runs, with some of SA’s elites a regular sight at the night runs, including Chantel Nienaber, who has represented SA at Trail World Champs: “There is something mystical about running at night. Your senses are magnified and you somehow seem to be more in touch with the earth as you move over the terrain. The atmosphere is always electrifying as the participants light their way with their headlamps, and people generally arrive at a night race with a sense of excitement and exhilaration. What’s not to love about it?”