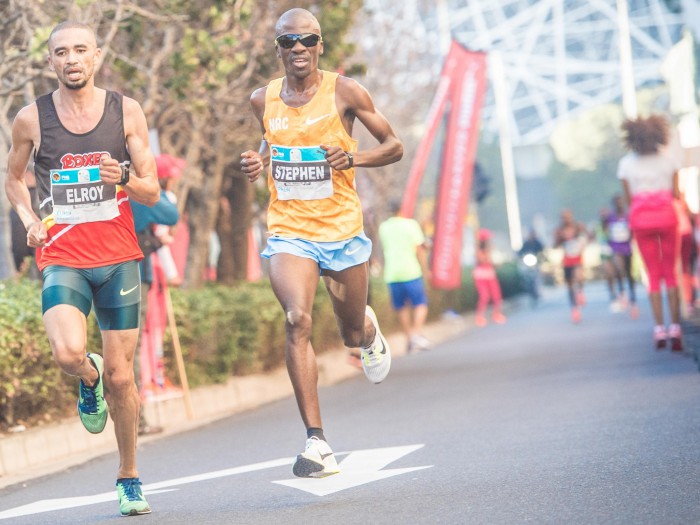 The two athletes everyone can’t wait to see race each other on the road over 10 or 21km, 31-year-old Lesego Stephen Mokoka and 30-year-old Elroy Gelant, will face-off on Saturday, 24 September 2016 (Heritage Day) at the inaugural FNB Joburg 10K CITYRUN.

This is fast growing into one of the biggest rivalries in men’s middle distance running, reminiscent of the likes of the Sinqe-Mtolo-Temane rivalry and the Yawa-Peu-Motshwarateu rivalry of the late eighties and early nineties.

Up until now Mokoka has been the victor on most occasions, either using his devastating kick to great effect or merely grinding down his opponent.
There is, however, a new air of confidence surrounding Gelant. “At the FNB Cape Town 12 ONERUN it struck me that I needed to fear no one,” says Gelant. “In my preparations for the Olympics (5000m) I firmly believed that I could come back with a medal and even trained to get my body to a point where, if needed, I could run a 52-second last lap.”


Whilst Gelant was not able to get near the medals in Rio (he finished 13th in the final), it is this new found confidence that is exciting to behold. “At the Cape Town 12 ONERUN I was in great shape and could feel it. I could answer any surge with ease. It was only in the final kilometre that the wheels came off a bit. I have trained differently now to make sure that in that final kilometre I can not only stick with the leaders but also challenge and even beat them.”


Mokoka loves the rivalry. “I have always said that I want to see more Mokoka’s and Gelant’s out there. We need to have these rivalries if we are going to be an international force again. We have the talent. I love racing against Elroy; he brings out the best in me. Hopefully, our racing will encourage the others to also reach the standard that we have been setting of late so that we can be a challenge on the international circuit again. I have the SA 10km record on the road (27:38 – Manchester, 2015) and Elroy has the SA 5000m record (13:04.88 – Hengelo, 2016). We should be challenging internationally.”

The two have met three times in 2016 with Mokoka holding the edge at 2 wins to 1. Gelant won the SA 10km road championships, before Mokoka beat him to the SA 5000m title in Stellenbosch in April and also was too good at the Cape Town 12 ONERUN in May.

Both athletes are looking forward to the FNB Joburg 10K CITYRUN. “We bring out the best in each other when we race,” says Mokoka. “So we can promise that you will see a great race on 24 September. Hopefully the other guys (Lucky Mohale, Sibusiso Nzima, Gladwin Mzazi) are also in great shape, so that we can have a big race.”

“For me it is always special when I race against Stephen,” says Gelant. “We have pushed the boundaries a bit and I know that on 24 September we will once again push each other. It is also exciting to now have the Joburg 10K CITYRUN to go with the Cape Town 12 ONERUN. We need more races like this to raise the standard of the sport in the country.”

Along with Mokoka and Gelant, the race has also confirmed the likes of Sibusiso Nzima (Rio Olympic Marathon), Gladwin Mzazi and Lucky Mohale as well as 1500m specialist Jerry Motsau who recently showed the country’s top milers a clean pair of heals in the Randburg Harries Street Mile.

The streets of Johannesburg will come alive with activity with lively performances from leading dance groups: Moving into Dance Mophatong, The Johannesburg Youth Ballet and The Field Band Foundation.

The action of the inaugural event will be closed off by South African folk swing band, Rubber Duc.

Each entrant will receive a magnificent PUMA ®Performance Event Tee.

FNB Business has decided to sponsor the FNB Joburg 10K CITYRUN because we believe in supporting a race that encourages people to run and know their city; a race that will re-invent how people perceive and experience the city centre. The FNB Bank City buildings are well-known and iconic buildings in the Johannesburg CBD and the precinct was recently revamped in 2015 with three lifestyle concepts of Work, Eat & Play in mind. For many years it has been viewed as traditional banking headquarters; however the recent revamp has positively changed the experience of the precinct. The additions of new restaurants, coffee shops, health & beauty stores and other stores of interest have been well received. Sponsoring the FNB Joburg 10K CITYRUN is aligned to our belief in the importance of rejuvenating and reviving the city centre so it remains relevant.