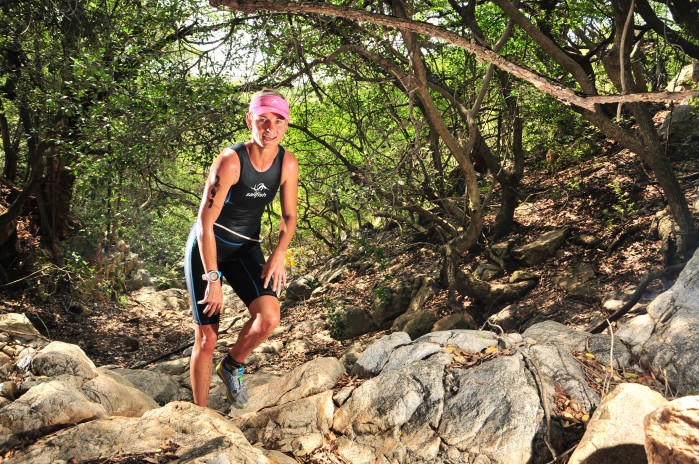 16 Sep 201617 May 2019 Modern AthleteColumns
Share
Tweet
0 Shares
Sylvia van Tromp has always been a sporty person, with swimming her focus, but having also developed a passion for running and cycling, XTERRA off-road triathlons have become her new addiction. Now with Suunto taking her on as a brand ambassador, the world is her playground.
Having swum competitively most of her life, Sylvia says it ticked a lot of boxes for her in terms of health, fitness, competitiveness, sporting success, and more. “Swimming has always been my first love. In high school I obtained provincial colours in swimming, and after school I swam and played water polo provincially,” she says. It also contributed hugely to her career, as she is not only a registered biokineticist, but also works as a swimming coach at the Vanderbijlpark Virgin Active, where she specialises in coaching Masters’ swimmers and triathletes, as well as coaching stroke correction.
However, swimming still didn’t tick all the boxes, so Sylvia started mountain biking with her husband, Gustav. “He’s done quite a few Ironmans, so he suggested we do the BSG Sprint Series,” says Sylvia. It was a good decision, as her swimming strength combined with her ability to ride and run soon turned Sylvia into a triathlon machine!
TAKING ON THE WORLD
In 2010 she not only completed her first 70.3 Ironman, but won her age category! The very next weekend she continued the medal streak as she finished second at her first XTERRA event, at Buffelspoort. Then in 2012 she enjoyed her real breakthrough year, qualifying to race at the World Cross Triathlon Champs, in Pelham, Alabama in the USA. Sylvia won her age category, a remarkable achievement for someone who had a baby the year before. In 2014 Sylvia was once again selected to represent South Africa at the World Cross Tri Champs in Zittau Germany, and then again in Sardinia, Italy in 2015.
“It was a dream come true to finally obtain my national colours. It took me 35 years, but I finally did it,” says Sylvia. “What made it even more special was that my husband also raced that year in Italy, as an age-grouper, and he was there to watch and support me. There I was, a 35-year-old housewife from Vanderbijlpark, rubbing shoulders with the best in the world. It was beyond logic, and I had a smile on my face from start to finish!”
The standard of racing at the 2015 World Champs was very high and Sylvia didn’t place this time, but she loved the experience and says it just motivated her to train harder. When asked what else she uses as motivation, she jokes, “The number of biscuits I eat before going to bed!”
FINDING BALANCE
As a working mom, Sylvia’s life is all about balance, and she makes sure she is done with her training by midday so that she can spend time with her daughter, although there are times when she can combine the two. They already share a passion for swimming and are often seen in the pool together, and Sylvia says, “I really look forward to her riding her bike while I run.” She adds that she wants to instil in her daughter the lessons she has learnt through sport: “It is important to me that she sees me race and that she sees me both win and lose. I get such a good feeling before a race when she says ‘Good luck, Mommy,’ it makes me feel like I can move mountains!”
Sylvia believes she still has another year or two to compete as an elite and is setting her sites on the Mandela Day Triathlon, Rockman Ultra and the XTERRA SA Series. It’s a full diary for a full year, but the bottom line is she simply loves what she does. She loves riding her bike, she loves the freedom of swimming, and she always feels better after she has trained. That’s why she follows a simple but effective mantra: “Just put on your shoes and get out the door!”