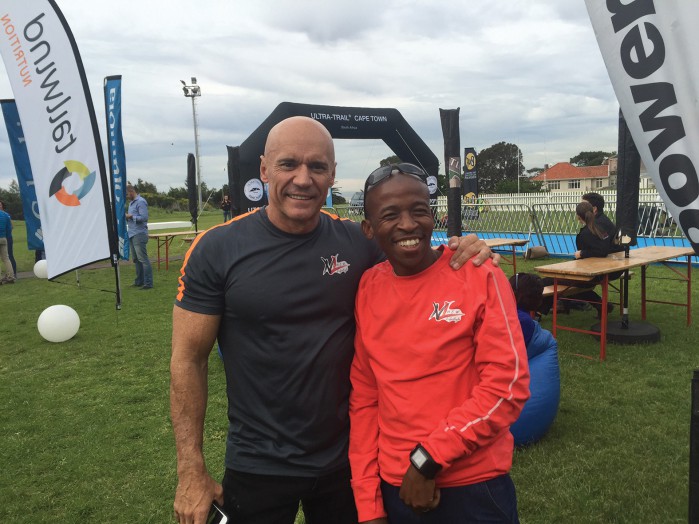 Having seen three of his athletes win the Comrades Marathon, and a fourth that he took nearly all the way to the race also claim the title, John Hamlett is undoubtedly one of the most successful Comrades coaches of all time. – BY SEAN FALCONER

In 2001 Andrew Kelehe powered his way to the Comrades title in a time of 5:25:52, earning his fifth gold medal and beating the supposedly invincible Russians who had dominated the race for a number of years. Two years later it was Fusi Nhlapo who flew down Fields Hill, contrary to traditional wisdom warning about shattered quads and jelly legs, and held on to win in 5:28:52. Fast forward to 2015 and Gift Kelehe powered his way up to Pietermaritzburg to also claim the Comrades title, clocking 5:38:36 and making history as two siblings both became Comrades winners for the first time, and then David Gatebe blitzed the field in the 2016 Comrades to not only win the race, but shatter the Down record with his 5:18:19.

Besides winning the Comrades, the one thing that all these athletes had in common was their coach, John Hamlett. (OK, Fusi left John’s camp six weeks before his winning run, but he still benefited greatly from the foundation work John did with him ahead of that race.) And yet, despite his incredible record of coaching success, which includes his athletes, male and female, winning a basketful of gold medals at Comrades and Two Oceans, as well as an SA Marathon title, John prefers to stay in the shadows and let his athletes enjoy the fame and glory of their achievements.

Teenaged Marathoner
Born in Joburg but raised in Natal, John (56) went on to rise to the rank of Colonel while working for National Intelligence. After leaving the service he went into private industry, embracing his success as a coach and branching out into the field of sports nutrition. He was quite some runner himself, with a love for long distance running that began in his teens. “I did all kinds of sport and my dad bought me the soccer boots, tennis shoes and everything else, but then at 15 I told him I wanted to run a marathon, and he said he wasn’t going to let me, because he said I didn’t realise how far it was. I nagged him until he eventually said yes, but he got so much flak over that race, because people thought he was pushing me to run so far. I think I did a 3:03, and from there I realised I was hooked,” says John.

“Later that year, still aged 15, I actually ran the Comrades, along with a guy called Klaus Durr. I broke away from him at 60km, but when I reached the finish they wouldn’t let me into the stadium, because I wasn’t an official entrant. Naturally we weren’t allowed to enter at that age, but we had a way to get around that. If you carried a bucket, you looked like you were seconding an athlete, so we put a little sponge in a little bucket and off we went. If anybody ever stopped us, we just said we were trying to catch up to the athlete we were seconding. After that I did a few more with the bucket where I only ran about 50 to 60 kays, because I knew I wasn’t supposed to be running… but those were the days!”

John went on to run the Comrades officially eight times, including posting a 6:56:51 best when he was 22, and today he still runs three times a week, pointing out that he has been fortunate never to have had any serious injury problems other than small niggles now and again. “I can remember older people saying running long distances at such a young age will lead to me breaking my legs and picking up problems later in life, but it was rubbish, and I think I’m stronger now than I ever was.”

Coaching Priority
While he was still in the service, John began coaching other athletes in between his own running, and it was when he was posted to Mafikeng that he met Andrew, which was to lead to him giving up his own competitive running. “I had just run a 2:18 marathon when Andrew came to me and said I must either coach them or train with them, but I couldn’t do both. And he was right. The Kelehe brothers are very logical and straight-thinking, no nonsense. I also realised that I was actually a better coach than a runner myself, so I decided to focus on coaching, because Andrew had the real talent. It was a hard decision, but I’ve never regretted it.”

So what is John’s secret to Comrades success, and how has he managed to help four different athletes achieve Comrades glory? He says it is a combination of talent, dedication and fire in the belly. “I don’t have a box that I wind up and out jumps a champion. It’s not like that. In simplistic terms, I can’t put in what God has left out – I can only evolve what is there – and that’s why we worked out a progressive programme for each athlete, looked at their nutrition, strengths and weaknesses, training needs and more, and it was a long process with each of them.”

“Andrew took 10 years to win Comrades. We built him up progressively, he ran many Two Oceans and won gold medals there as well as in Comrades, and finally we got him to win Comrades. But people don’t see that long walk to get there, they think it is an instant thing. Gift’s win was eight years in the making. After his brother won Comrades, he said to me he also wants to win it, so I said let’s get you building up to it. And same thing with David. When I met him in 2005 he was a petrol pump attendant in Rustenburg. I got him to do a couple of races, built him up nicely, and when he won the Rustenburg Mountain Race I knew he had it in him. Then he won the SA Marathon title in 2008, but the trouble was we were dancing with the mines, trying to keep him in a job so he could pay his bills but still be able to train. I had to sit in the background and let some things go, but we got there in the end.”

Making a Difference
Naturally, John says it is a tremendous feeling to see one of his athletes come home first, or win gold medals, set PBs and get the fame and glory that their hard work deserves. “At the end of the day, I want to be able to look back on what I did and know that it counted, that it made a difference. You know when you did the right thing at the right time for good people, and it’s nice to see a good, honest, noble man get what he deserves. Like somebody who was living in a shack now having a nice home, or somebody that everybody wrote off suddenly gets what he wants after you’ve worked with him for 10 or 15 years. Then you get what you want, too. There’s a lovely moment when they cross the line and it’s like your brother or your son winning it. Getting the Comrades wins has been a lifelong goal for us all, and we worked up progressively to learn what worked and what didn’t, then evolved it into something that makes them champions. And we’ve gotten the results.”