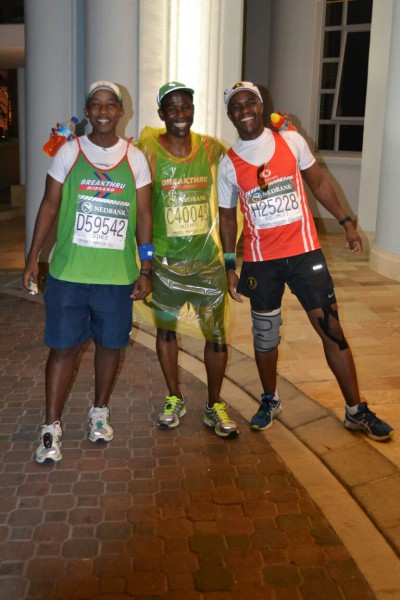 14 Aug 201617 May 2019 Modern AthleteFeatures
Share
Tweet
0 Shares
It was a real shock to his family and friends when Sihle Mlaba passed away on 3 June, due to stomach complications, five days after finishing his sixth Comrades marathon in 10:10:04 and seemingly good health. He was a passionate runner who loved the Comrades, and he will be sorely missed by his Midrand Striders clubmates.
There are two dates that both involve tragedy for Sihle Mlaba and the Midrand Striders club: 22 October 2011 and 3 June 2016. The first date was when five runners from the club were killed by a drunk driver while out on a training run in Midrand. It was so nearly seven runners killed… Sihle and his close friend Vusumuzi Madonsela survived because they were late that morning for the regular group run, and having nearly caught up to their friends just before the accident, they were the first people on the scene. As Vusumuzi says, “We could have also died there, but I guess God still wanted us to spend more time together.”
According to Duane Newman, who was Chairman of Midrand Striders at the time, “It was a really traumatic time for Sihle, but he showed his strength of character, and even though he was hurting, he gave of his time to ensure his friends would be remembered. The driver was eventually convicted and sentenced to 12 years in jail – some closure for a tragic event – but Midrand Striders promised Sihle that we would continue to remember and honour his friends. We now have an annual memorial run on that day from Vodaworld to the place of the accident, and at this sad time of Sihle’s death, we also need to remember Moroese, Reneilwe, Given, Isaac and Nomvula.”
Recovery Time
Given his horrific experience, Sihle could easily have packed up his running shoes, and though he shared with Duane that at times it was tough to cope, he showed resilience to actually come back even stronger. That saw him run his best Comrades in 2012, clocking 9:56:24. “He was a man of strength,” says Duane. “Looking at all the races he ran, it is clear that he picked the tough races: The Tough One, Sunrise Monster, Om die Dam, Soweto, Slowmag, City to City, Jackie Gibson… and of course, the Comrades Marathon.”
“I think Sihle suffered from a common runners’ ailment called ‘ranmesia’ – a runner’s ability to forget, often just seconds after crossing the finish line, all the pain, blisters, aches, muscle cramps, chaffing, lost toenails, blood, sweat and tears,” jokes Duane. “Personally, I will remember Sihle as soft-spoken, polite, and always with a smile. As a fellow runner, I will mourn his loss, but celebrate his achievements.”
Big C Exponent
Sihle was known as a ‘Comrades evangelist,’ because he talked about the race all the time. It was even jokingly suggested that he should have been paid by the Comrades Marathon Association! As close friend and fellow Midrander Monde Matyesha says, “Sihle would take us through the Comrades route during our morning runs, giving us every detail along the route. These narrations were what novices in our morning runs used to enjoy, and it would equip them with a clear visual picture of what they will encounter. This Sihle did without struggle, because to him Comrades was the culmination of all that we would put together in our training sessions.”
Monde continues, “Before this year’s Down run I shared my race strategy with him and when he saw me flying past him, he reminded me, ‘Mfundisi, remember what you said,’ and I immediately pulled back – and after three attempts, I finally landed my first Bill Rowan. It was thanks to him… and it is a bitter pill to swallow that I can’t celebrate it because he is gone. One thing that soothes the pain of the loss, though, is knowing that we had a few days after the race to celebrate our achievements together.”
Another training partner, Collin Mothlabi, says, “Sihle taught me so much about running. I’m struggling to understand or accept his departure and that I will never see him again. I feel robbed…” These words are echoed by Tim Walwyn current chairman of Midrand Striders: “We at Midrand Striders will miss Sihle, as he made a huge difference to our running community.”
Last Word…
As one of Sihle’s best friends, it is fitting to allow Vusumuzi the last word: “I thank God for having afforded me a once in a lifetime opportunity of having a brother like Sihle. He was always there when I shared my struggles about my calling, and not once did he turn his back on me. As his friends, we surely can never take his place, but we would like to let his family know that we are also their sons and daughters – we truly thank them for having changed our lives for the better through Sihle, and we will always be there for them. Sihle, you will forever be part of me, my friend, brother, running partner and confidante.”