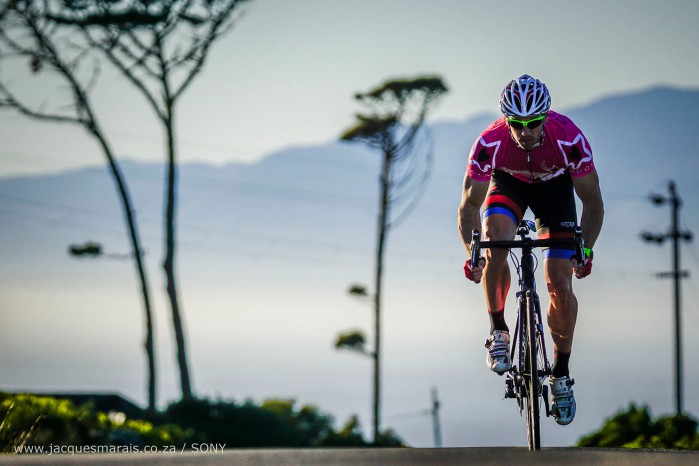 25 Aug 201617 May 2019 Modern AthleteFeatures
Share
Tweet
0 Shares
Over the next year, professional endurance athlete and Sabrina Love Foundation Ambassador Jamie Marais from Cape Town will be tackling four ‘giants’ as he takes on the Four Giants Challenge extreme endurance quest. And he’s doing it to inspire people to realise that “no giant is too big to face” as well as raise funds for the Sabrina Love Foundation, which cares for children with special needs.
24 summits of Table Mountain in 48 hours.
Jamie will run up Table Mountain 24 times, covering approximately 72 kilometres of vertical running and a staggering vertical ascent of over 18 000 meters – more than twice the height of Mount Everest!
Attempt the greatest vertical height on a bicycle on the Du Toits Kloof Pass.
His second challenge will be an official Guinness World Record Attempt for the “Greatest vertical height on a bicycle in 12 hours,” which he will achieve by cycling up and down a mountain pass as many times as possible.
Paddling the 676km length of the longest lake in the world, Lake Tanganyika, on a stand up paddle board.
He will then head to Tanzania to become the first person ever to attempt to SUP paddle the storm-driven waters of Lake Tanganyika, filled with large colonies of hippos and some of the biggest recorded crocodiles in the world,
A speed ascent/descent of Kilimanjaro, the highest mountain in Africa at 5890m.
Finally, Jamie will travel to Kenya where he will attempt to get up and back down the highest mountain in Africa, Mt Kilimanjaro, which he hopes to do in under 10 hours!
So what makes Jamie want to take on these incredible and dangerous physical challenges? “All of us face giants, but no giant is too big to face,” says the man who has already overcome tremendous personal challenges in his own life, including his own battle against drugs as a teenager. Now 40, married and a father of three, he went looking for four of the biggest, extremely tough physical challenges he could find in South and Central Africa, most of which have never been attempted before. “I wanted to use my physical ability to inspire and help people with a physical disability, those people who could never do the sort of things that many of us do on a day to day basis without evening thinking.”
Of course, Jamie’s been hard at work preparing himself physically and mentally for the Four Giants Challenge. In June he made history by becoming the first person to ever run up and down Lions Head Mountain in Cape Town for 12 consecutive hours, summiting 12 times and thus achieving the greatest number of consecutive summits of Lions Head ever recorded. Running up and down the steep, loose, rocky climb, he covered more than 60 kilometres straight up and down, with almost 5000 metres vertical gain. “I was pretty tired afterwards, but very happy”, he says. “This was actually part of my training to test myself and see how my body responds to prolonged extreme physical effort.”
And in all of Jamie’s challenges, up to the minute information is of the essence, and that’s why Suunto’s sponsorship of his Four Giants Challenge is so important, providing him with the equipment he needs to be able to track time, mileage, ascent, heart rate and more.
For more information, visit Four Giants Challenge on Facebook or his official athlete page, Jamie Marais Extreme Athlete. To donate and show your support, visit www.sabrinalove.co.za and select the ‘Support a Star’ option.