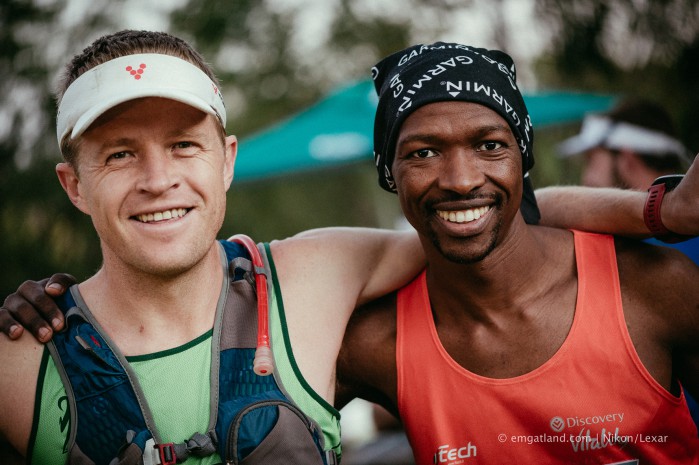 25 Aug 201617 May 2019 Modern AthleteColumns
Share
Tweet
0 Shares
“Fancy a run in the Kruger?” was the question posed to me by Andrew Venter, CEO of Wildlands. Sounds superb, I thought and immediately posed the same question to Modern Athlete’s CEO, Craig van der Westhuizen, so off we went to the Kruger2Canyon, a two-day race presented by Old Mutual and Wildlands, and one hell of an adventure! – BY RICHARD LASKEY, MODERN ATHLETE HEAD OF DIVISION
The first day of the Kruger2Canyon is 42km long, with an insane vertical profile that features 2300m of climbing, including a 600m elevation gain within the first 4km! So, on the first morning, together with Craig and my good friend Sibusiso Velane, the adventurer extraordinaire who has summited Everest twice, we prepared for the start over a cup of coffee, a rusk and some typical banter. No sooner had we started the run in the early morning mist, than the jokes turned to silence as the task at hand became a reality.
The single track we were on became more slippery as we climbed under what looked like a tunnel of tree canopies. It felt like we were in a rainforest, surrounded by tree ferns. Our running pace had long since slowed to a mere walk, like octogenarians hanging onto their Zimmer frames, and we made use of trees, roots and rocks in pretty feeble attempts to gain any sort of traction. My heart rate was through the roof, breathing was erratic, felt as though a python was constricting me with its coils, tightening around my chest with each breath I took.
Hanging in there…
Distraction time… I looked all around and took in the incredible scenery. Massive cork trees winding their way up to the clouds, gargantuan roots grown into rocks like large ingrown toenails, never to be removed, and looking skywards, seeing drops of water from the slopes above in a suicidal race against each other to the rocks below. Communicating with Craig was now more like two tattooed bikers cussing at a rally, with both our sense of humours having long taken a vacation on some exotic island. But after what felt like an eternity, we finally managed to crest this massive beast after 2300m of climbing, clambering, slipping, sliding and falling, allowing us to take in a spectacular view of the surroundings below.
Our descent began on weary quads, shaking more than Elvis’s pelvis in front of a thousand screaming girls. After what seemed like another eternity, we could hear the faint voice of the commentator calling us home, and like Prodigal sons, Craig and I crossed the finish line 27 seconds short of 10 hours! A mouth-watering potjie for dinner prepared by the local farmers had us licking our fingers and plates like prisoners on death row consuming our last meal, and then consuming a few green bottles whilst watching the Bokke come from behind to beat Ireland made the day’s accomplishment even sweeter.
Back into Battle
All too soon the alarm clocks sounded as day two dawned, and like battle-weary soldiers we kitted up for war, our opposition today thankfully weaker than the day before, a mere 28km and mostly flat… Victory seemed imminent. We started with a long descent – imagine the Kyalami Mineshaft – but the problem was that my engine was spluttering like a ’72 Beetle and not roaring like an Audi R8.
Into the Kruger Conservancy we went, with dust, thorn trees and scrub. What a privilege to run in this special place, home to so many diverse species of fauna and flora, and one could only be grateful for this amazing opportunity. Giraffe, wildebeest, the elusive wild dog and a few more animals were spotted, and whilst stumbling along at a pace that could best be described as reverse, I had the awesome experience of treading on a Skaapsteeker – thankfully, a non-venomous snake. Unfortunately, my speed of a sloth enabled this reptile to escape before I could convince it to pose for a selfie with me.
Running on Empty
With the African sun blazing down on us like a smelting furnace, my energy levels resembled the tiniest red blip on my I-phone battery as we began the climb back up the very hill we had whistled down earlier. With Craig spurring me on, shouting words of encouragement – and some choice obscenities – we crawled our way towards the finish line. With 200 metres to go, we broke into the proverbial TV run, although to be fair, we looked more like rugby players with two left at their first Salsa dancing competition! Anyway, we made it, crossing the line with arms around each other in four hours, tired, broken, thirsty and stoked.
The Kruger2Canyon id not for the faint-hearted, but definitely should be on the bucket list. Thanks to Andrew Venter, Louise Duys and the Wildlands team as well as Karen Thomas and her Old Mutual team for this amazing opportunity. See you at Mont Aux Sources!