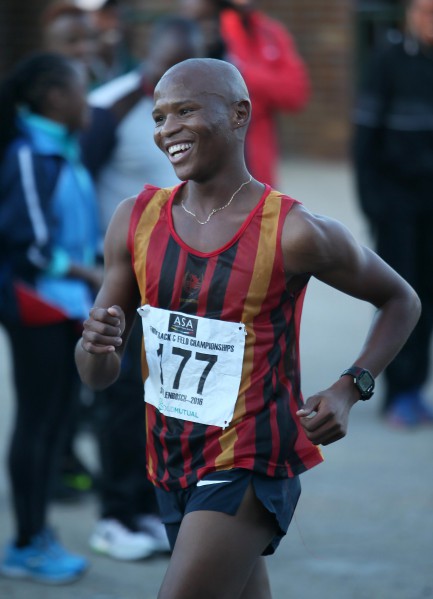 12 Aug 201617 May 2019 Modern AthleteNews
Share
Tweet
0 Shares
If there is any truth in the saying ‘big surprises come in small packages’, then Lebogang Shange’s performance in the 20km race walk tonight at the Olympic Games in Rio should be worth watching.
Lebogang from High Performance Centre (HPC), in Pretoria weighs only 56 kilograms and is 1.60 metres tall, but he compensates with guts and determination for his lack in physical stature and has a totally fearless approach to international racing.
Chris Britz (TUKS Coach) is of the opinion that if Shange should come close to doing a repeat of his best time of 1:20:06 tonight, he could finish in the top five. Depending on how tactical the race turns out to be, the South African might even be in contention to win a bronze medal.
Chris thinks the temperature will probably rise to only about 26 degrees with the humidity being around 80. If this should be the case, it may slightly favour Lebogang. Because it is the Olympics, Chris does not expect the athletes to race for a fast time.
“It will be all about winning a medal, which means it will be a tactical race. I expect the winning time to be round about 1 hour 19 minutes.” In spite of being an Olympic novice, Lebogang is not one to walk just to make up the numbers.
“I won’t lie. There can be no greater honour than winning a medal for my country at an Olympic Games. For me that would definitely be the ultimate. If I should manage to do that, South Africans would hopefully begin to consider walking as a serious sport,” said the HPC athlete.
According to Lebogang, it will be important to stick to his own game plan. “I am going to race aggressively and stick with the race leaders, but I have to be careful not to start off at a too fast pace. If I do that I might end up paying for it later when the real racing begins.”
Last year’s Spanish world champion Miguel Angel Lopez will resume his rivalry with China’s Olympic champion, Chen Ding, tonight. Wang Zhen and Cai Zelin, also from China, will be the other race walkers to watch.
It was the 2008 Olympics in Beijing, and in particular Jared Tallent’s double medal haul in both the 20km and 50km events, that first inspired the 25-year-old Lebogang to have a go at the discipline.
“Because I am slightly ‘lazy’ by nature watching the race intrigued me. It looked so easy, almost like a walk in the park, and it was hard to believe that it was an Olympic Sport. So I started walking, but I soon realized that there is more to race walking than meets the eye. I then started reading up about it on the internet. I also tried to meet up with as many other race walkers and pick their brains, trying to find out how I should go about walking faster times.”
Lebogang’s keenness to learn has led to him improving the SA 20km race walk record on three occasions during the last 14 months. He also set records in the 3000m, 10000m and 20000m.