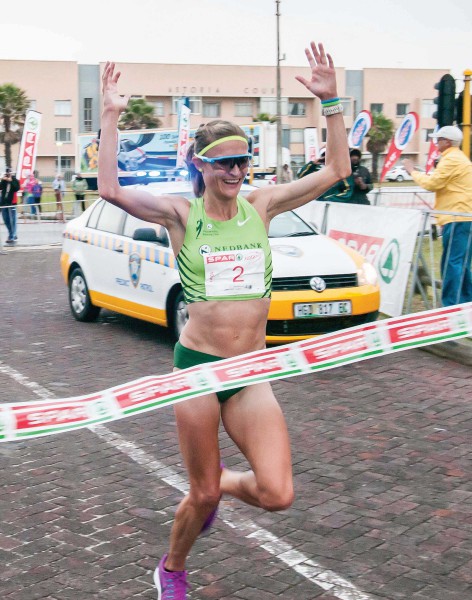 Unbeaten on SA soil this year… Now that’s not a phrase you often hear in running circles, but it has become a common theme in one post-race media release after another as Irvette van Zyl continues to enjoy a stellar running year. This August will see her in action in the Olympic Marathon in Rio, and then she intends returning to SA to hopefully continue her winning streak. – BY SEAN FALCONER

She was selected as one of three members of the SA women’s marathon team, having posted the fastest qualifying time by a South African when she crossed the line in 2:32:20 at the London Marathon in April. She will be joined by Lebo Phalula and Christine Kalmer in the Olympic Marathon. Unsurprisingly, Irvette says she has greatly enjoyed her winning streak, but her main focus this year has definitely remained on Rio. “I’ve heard about this ‘unbeaten on SA soil’ thing, but there are still a lot of races to come after the Olympics, and that can change very quickly.” So far this has been quite some year for Irvette. She has posted wins in three Spar Women’s Challenge races in PE, Cape Town and Durban (and she leads the Spar Grand Prix points table), as well as the Totalsports Ladies Race in Durban, the Old Mutual Two Oceans Half Marathon and several other events. She also won the 5000m title at the SA Track and Field Champs in Stellenbosch, and the year is set to get even better this August as Irvette heads to Rio for the Olympic Games.

“The Rio marathon has always been my main goal for the year, but when I get back it will be back to the 10km Spar races in Joburg and Pretoria. If I manage to win both, then I will become the first athlete to win all five in the series in a single year. Rene Kalmer won four out of five in 2012 but then missed the last one due to injury, which I won. I’m almost at her mark now, but for now I’m not even thinking about those races, because Rio is the focus. I’ve just been getting the mileage in, because marathon training is a big increase, but the training has been going really well.”

When asked what her hopes are for Rio, Irvette gets a steely look in her eyes and says her first priority is going to be to finish the race, after she was forced to drop out of the 2012 Olympic Marathon in London due to an Achilles injury. “I took so much criticism after bailing in London, but I had aggravated my Achilles training on the gravel roads of the parks in London, and by the time I got to 17km the pain had become so bad that I just couldn’t carry on. It felt terrible to bail, but I learnt valuable lessons as well, which is why this year I asked if I can only travel to Rio five days before my race. In London we went too early, first for a training camp, then the Olympic Village, with new physios, different training surfaces, different food, and more. This time I want to keep things ‘normal’ for as long as possible before going across.”

In terms of strategy in Rio, Irvette says she will set out at 3 minutes 30 per kay to begin with and try to stay with the main race pace, then maybe after 10km drop to 3:35 and see if she can find a strong pack to run with and take it from there. “I would love to run a 2:30, because my ultimate goal is still to go under 2:30, but that is unlikely in Rio. I don’t think times will be the issue, it will be down to the heat and humidity. Rio is much hotter than Pretoria, so I have been training at midday and trying my best to get ready for the conditions, but I won’t know how well I can cope with it until I get there. That’s why I say a realistic target is to try finish in the top 20 – and anything better I will definitely take!

She adds that the three South African marathoners may each run their own race instead of trying to work as a team. “It’s probably our biggest problem on the world stage that we don’t work together like the Kenyans or other countries, but we don’t train together, so it would be a bit much to expect us to suddenly race together. Sure, we will discuss tactics, but I think we’re on different levels and run differently, so I think it unlikely we can race together. Obviously, we’ll also see how the race goes, and maybe during the race we can adapt our tactics, especially if we are running together.

Running has always been part of Irvette’s life. As a little girl she tried never to miss a race when her aunt and godmother, 1992 Comrades winner Francis van Blerk, was running, and Francis would often hang her new medals around little Irvette’s neck. That must have planted the seed, because when Irvette grew up all she wanted to be was a runner. At the age of nine she started running cross country, running 4km each day (2km morning and 2km evening) for training, all under the watchful eye of her mother, following in the car. She would even get her mom to drop her a few kays from home when driving home from extra maths lessons, so she would not miss a run!

At 13 she started training with a coach and at 14 she won her first SA Cross Country junior title, going on to represent SA at the World Cross Country Champs. Later, when she won the Joburg leg of the Spar series still as a junior, she confirmed her star potential, but a serious scooter accident in Grade 11 nearly ended her running career. “The doctors initially said I would probably never run again, and it took me a long time to recover, but I did come back.” she says proudly. However, then she found that varsity life was getting in the way of her running, until two years down the line she decided to stop her studies and focus on running. She was also now in a steady relationship with 400m hurdler LJ van Zyl, whom she married in 2012, after they both returned from the London Olympics, and they now have an 11-month old baby, Louis.

LJ and Irvette will both be going to Rio in August, which will make them only the third married couple ever to represent South Africa at the same Olympic Games, after Craig and Natalie Fulton (hockey, 2004) and Mike and Elvira Wood (fencing, 2008). “It’ll be the first time it happens in athletics and is very exciting,” says Irvette, “but we both learnt a lot in 2012. London was actually a bit of a disaster for us both, so this time we’re better prepared. It was my first Olympics and LJ’s second, so I overindulged in everything, from talking to everybody I could meet, to eating too much of the great food. I basically did everything wrong! And LJ felt like he needed to protect and guide me, even though I can look after myself. This time we’re going with a different outlook and will give each other more space, because running is an individual sport, and you need to focus on the job. We’re both so much more at ease for this year’s Olympics, because we’ve looked after our bodies, prepared well, and everything feels like it is coming right.

Another reason Irvette says they are both more relaxed is thanks to the birth of ‘Little Louis,’ as she says he keeps them both grounded and free of stress, but then she gets a longing look in her eyes as she says she is really going to miss him while she is in Rio. “Louis will stay with my sister in Naboomspruit and it will be tough, because it will be the first time I have been away from him for more than a week. LJ has away for longer periods while competing overseas, and now he’s telling me it is going to be tough. I’m the mother… I know! Worst is, we may even miss his first steps while we’re in Rio, so I’ve given my sister a speech about not missing getting it all on film!”

Looking ahead, Irvette says that she will focus on the remainder of the Spar series when she returns from Rio, and then next year she wants to get back on to the track. “Seeing Dom Scott doing so well on track, clocking a sub-32 for 10,000m, has motivated me to try the track again. When I won the SA 5000m title earlier this year, I saw that I still have some speed in my legs, but my PBs on the track are not that good, so I want to get them down. And then I will have another crack at a fast marathon later in the year, and hopefully that will set me up for eventually qualifying for the 2020 Tokyo Olympics. Who knows, I may even make it to a fourth Olympics in 2024!

•   First major win came at the Zevenheuvelenloop 15km in the Netherlands in 2002, aged 15, during an overseas holiday.

•   Has represented SA at the World Cross Country Champs, the World Half Marathon Champs and the Olympic Games