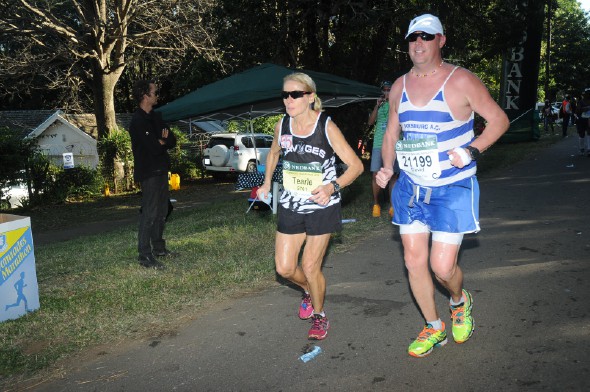 I can now really say that I have seen the good, the bad and the ugly of Comrades. I won it in 1993. I have run a silver time 10 times. I got put in the ambulance in 2013 and finished my race in St. Anne’s Hospital. Now in 2016, going for my 30th medal and Triple Green Number, I got cut off in Pinetown. The one thing I still have never done, however, is voluntarily got into a ‘bailer bus.’ – BY TILDA TEARLE

This year my training went well up until 1 May. Then I ran the Deloitte Marathon and at 39km I pulled up like a lame horse. If I had been a race horse, I would have been shot immediately… and probably made into meat pies. Luckily, I am not a horse.

I didn’t run a step for two weeks, and after much poking, prodding and ‘wheel alignments,’ I was able to limp 4 or 5km at a time. The week before Comrades, things were feeling a bit better, and my thoughts were “better to try and fail than not try at all,” so I decided to remain optimistic and confident. I knew that I would have to take painkillers on Comrades day, so discussed this with a doctor who reluctantly wrote a prescription for medication that would not cause nausea. He told me that he believed “my balls” were too big!

Comrades’ morning dawned and off I went to Pietermaritzburg, with hope, but not the same feeling of joy I normally have. I knew I was in for a tough day, but Savages club mate Robbie Richie and I planned to run together if everything went according to plan. On a ‘Down Run’ I make arrangements to see husband Clive and my mom in Alexandra Road. This year I ran past them, gave them a hand tap and burst into tears, but Robbie gave me a pat on the back and I pulled myself together. There was no time for tears.

From there on the run was uneventful. The sun came up and I saw “the cow,” “the rhino,” and the lady being pushed in the adult pram. Our pace was slow, but on track, and before halfway I found Dave Williams, who said he was fine but slow. Suddenly I realised I needed to get moving to get through halfway before cut-off… I have never had to worry about cut-off times before! Thankfully, we skidded through halfway with about five minutes to spare, but by this time I was into “pain management.” After so many hours this tablet, then after so many hours that tablet.

At Heidi’s I stopped at the Riverside tent for a chat and a bite of a sandwich. I was told that Dave Williams was a minute behind me, and I was happy he had got through halfway as well. Robbie and I soldiered on, but later I lost him when he went on ahead. I got to Hillcrest and met my sister, who had a sandwich for me, and I told her I would prefer a Rennies tablet, and that I really wished the day was over. I had now found a new friend from Boksburg, who attached himself to me, and we soldiered on. My legs were on fire and my kneecaps felt like nipple caps. I was hating the day.

When we got to Pinetown someone said that we had two minutes before cut-off, and suddenly we were sprinting (at least, I thought so) through Pinetown to get to the cut-off point in time. My watch said 9:33 and the cut-off was 9:30. The barriers were up and they were pulling up the timing mats, so I quickly jumped on a mat so that anyone tracking me could see I had gotten to Pinetown. The decision that I was not finishing Comrades 2016 had been made for me.

I gladly got into the ‘Greyhound’ that was waiting for the cut off runners. In fact, there were many buses, as there were many runners who didn’t get to Pinetown in time. The cut-off bus is actually a fine place: There are biscuits, potatoes, juice, and more, but on the bus I told those runners that were moaning to stop. I told them if they die tomorrow, it would never be written on their gravestone, “Here lies so and so… he failed to finish Comrades 2016.” I also told the novices to look at the number I was supposed to be running, and that I should be the sad one. Then a female novice with a cell phone came to sit next to me, and started taking selfies of herself with me. She wanted proof that we were on the same bus!

Meanwhile, I used her phone to call Clive and tell him I had missed cut-off and would see him at the finish, but there were no tears. And as our bus sped down to Kingsmead, I looked out the window at the suffering runners and thought to myself, “I’m actually glad I’m on the bus.” But when I tried to get off the bus, I needed two guys to lift me off and put me on the ground!

Once dropped at the finish, you have to go through a special entrance and over a timing mat – I suppose they track how many cut-off runners there are. There is coffee, tea, Coke, soup, etc., and there are tables and chairs for relaxing. I didn’t relax, instead going to wait for Clive, but he was taking a long time to get there, so I went to our plan B and dragged my body to the Savages tent. I then got Claire to phone him and tell him to meet me there. He duly arrived and said he was sad for me – in fact, he had been feeling sad the whole day, because he knew I was not happy – but I have to admit to not shedding one tear over a non-finish. In life, I have always taken the good with the bad. Comrades will always be there, and I would prefer to enjoy my 30th rather than hate every step. As they say in the classics, “I will be back.”