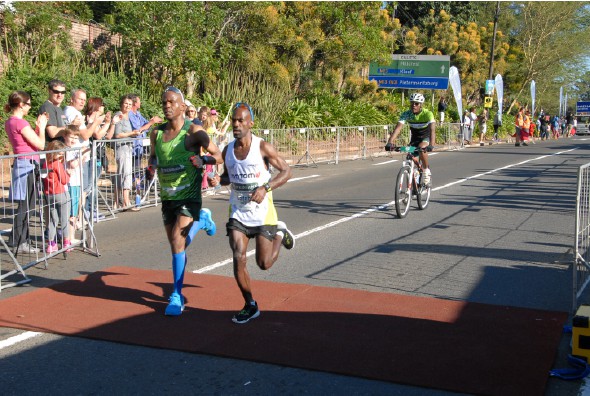 He may still have been able to fly under the proverbial radar before the 2016 Comrades Marathon, but newly crowned Comrades champion and Down Run record holder David Gatebe’s life will never be the same after his scintillating win in Durban at the end of May. – BY SEAN FALCONER

When the top contenders for the 2016 Comrades Marathon were introduced to the media at the pre-race athletes’ press conference, David Gatebe joined his TomTom Athletic Club mates and coach John Hamlett on the stage, but he was not asked any questions by the media. That’s partly because 2015 champion Gift Kelehe was next to him and fielded most of the questions, and partly because David simply was not rated as one of the top contenders for the win, given that he ‘only’ finished 24th, 32nd and 21st in the three previous editions of the race.

Granted, he was still recognised by the journalists, thanks to having won the Old Mutual Two Oceans Marathon in 2013, as well as having won the SA Marathon title in 2008 and the City to City Ultra in Gauteng, but his Comrades record didn’t hold up to that of several other runners at the press conference, and he thus flew under the radar – which probably suited the quietly spoken, somewhat shy athlete from Rustenburg.

David (35) hails from Maokeng township in Kroonstad, in the Free State, the third of five siblings, and he came to Rustenburg after completing school in 2004 to look for work. “I did not have money to pay for studies, so I decided to go to Rustenburg looking for a job, and I ended up working at a filling station as a pump attendant,” he says, adding that he found solace in his running to offset his disappointment, taking up marathons and ultras in 2005, leading to his SA national title in 2008.

David believes that his fortune started improving in 2012, when he met sports manager Blackie Swart, who worked at Impala Platinum Mines (Implats) in Rustenburg. He had just won a local 10km race in Rustenburg, breaking the course record, and Blackie was impressed: “We chatted and, after a while we agreed that I would organise for him to come and work with me, so I could train him and expose him to what he loved to do most, athletics. That is how he joined Implats as a sports clerk. He never looked back, training hard every day, and went on to win the Two Oceans Marathon in 2013, and then ran the Comrades that same year. He was only beginning, and I think he always knew what he was working towards – winning the Comrades.”

While he appreciates his mentor’s words, David says his early attempts at Comrades showed that he was not yet quite ready for the 90km ultra.”My first Comrades was in 2013, after winning Two Oceans, and I was trying to win both in the same year, but I realised that winning Comrades is something that takes serious work. I improved a bit the next two years, but I knew I still needed to do more work. The Comrades is a different race to the Two Oceans. It is a long race!” he chuckles.

That saw him join the newly formed TomTom Athletics Club and head to Dullstroom in Mpumalanga for two months of altitude training with Gift and the rest of the squad. The training went very well, and David says he came back from the mountains knowing he was in peak shape. “I was fit for the race and knew that I could win it. I could not wait any longer; I was well prepared mentally and physically. I even told my teammates that I was going for the record, that I wanted to finish the race in five hours 19, while the record was five hours 20,” he says.

And so race day arrived, the so-called ‘TV runners’ dominated the early stages before eventually dropping off the pace, and then the serious contenders came through, with David amongst the leaders. Coming through Kloof, David took the lead with the clock showing 3:47, flew down Fields Hill, stretched his lead still further going up Cowies Hill, and it was then that his thoughts really became focused on the record. “When I smelt the sea with 10km to go and I saw the time, I knew nobody would catch me. Then my coach yelled at me that I could beat the Russian’s record and that seemed a good thing to do.”

He crossed the line in 5:18:19, still looking strong, then dropped to the ground to pump out six push-ups. “I wanted to show that I could still go for another 5km or 10km. I was probably overly prepared for the race, and after achieving my goal of winning it, I felt an overwhelming energy rush at the finish line. And now the record is back in South Africa. I am very, very happy,” he says.

With just over a million in cash coming his way soon – once doping control tests have been completed and the race results are officially accepted – David could be forgiven for saying that it’s time to enjoy life a bit, but the humble champion remains as focused as ever on his running, and is already talking about next year’s racing. “I am looking forward to next year’s Comrades, which is an Up Run, my favourite. My aim is to take the bar even higher in terms of my record,” he says.

When not working or running, David relaxes at home with his wife and two young daughters, and he attributes much of his success to their support. “My wife understands that everything about me revolves around athletics, but that’s not the be-all and end-all of what I do. At some point, my family does take charge, but one of the reasons why I love running is because they encourage me and they’re my biggest supporters. With this win, I know they are proud of me, and they’ve encouraged me not to change my lifestyle, but to keep running.”

As for the money, David says he is not going to be spending it when it arrives, but rather safekeeping it for his children’s education. “I struggled when I grew up in Kroonstad and I never had the chance of following my passion for management and advertising, so I’m going to invest in the education for my two little ones, because I don’t want them to go through what I went through. I want to ensure that my children get a better future with the best education that I never got,” he says, adding that he also has no intention of leaving Implats. “If there’s one thing I’m not going to do, that’s to quit my job. It’s very important to me.”

Doubling Up at the Ultras

Thanks to his win in the 2016 Comrades Marathon, David Gatebe now joins a very select group of athletes who have won both premier ultra-marathons in South Africa, the Comrades and the Old Mutual Two Oceans Marathon. More women have managed the feat over the years, but amongst the men it is a rare achievement! (To date, only four of these athletes have won both races in the same year.)

According to well known athletics statistician, David’s win also gives him another record: “Gatebe now has the unique distinction of being the only male runner who has won the SA marathon title, the Two Oceans and the Comrades. The only other athlete who has managed this feat is Frith van der Merwe, who won all three races in a single year in 1989.”

Welcome to the Fabulous 40s

This year’s Comrades saw three more athletes complete their 40th run to join the exclusive but expanding Quadruple Green Number Club. Vic Boston, Tommy Neitski and Zwelitsha Tiger Gono not only brought the club membership up to 12, but Tommy and Zwelitsha also became the first runners of colour to achieve 40 Comrades finishes. Between them, these 12 remarkable runners now have a combined total of 500 Comrades Marathons:

One of the highlights of the 2016 Comrades Marathon was once again the Modern Athlete Pacesetting Buses, expertly led home by our volunteer Pacesetters, some of whom have been doing this job for many years and have built up a dedicated following. These are the only official pacesetting buses at Comrades, and runners can ‘climb on the bus’ of their choice and rely on the ‘bus driver’ to guided them home within their target times.

Once again we offered the standard sub-9:00 (Bill Rowan cut-off), sub-11:00 (Bronze cut-off) and sub-12:00 (Vic Clapham cut-off) buses, and this year we added a sub-10:00 bus, which proved just as popular as the more established buses. Just take a look at the photos of the various buses and you will see the size of the groups that congregated around the bus drivers.

Modern Athlete would like to thank all of our Comrades Pacesetters for your incredible effort and performance at Comrades 2016. You guys once again did a terrific job and helped thousands of your fellow runners achieve their Comrades goals – and you deserve the hero status those runners now give you!