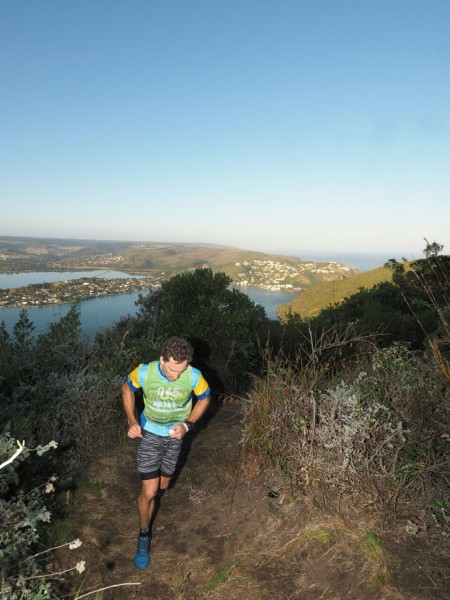 Stuart now remains the one to watch for the final two challenges. Stuart emerged victorious in a time of 0:54.48 which was the fastest time of the day, and the 2nd fastest time in race history for the 15 km route.

This was a remarkable eight minutes ahead of 2nd placed Theo Blignaut leaving him streaks ahead on the overall log. Stuart was elated after his win.

“Once again Featherbed lives up to expectations, its an incredible event. We were really blessed with a beautiful evening, the weather was cool with no wind, perfect running conditions,” said Stuart.

Stuart went out hard and was able to create a gap which he maintained throughout the race. Stuart put in a solid effort until the top of the climb which then allowed him to relax until you he hit the railway line.

“I knew that running under 4 minutes a kilometre would win me the race and that is what I did. I stuck to my plan and took in the beatiful scenery and enjoyed my run.”

With just over a minute separating the first three ladies in theDragons Featherbed Lagoon Mile Swim, Steyn came in third, maintaining her overall lead, making her the current favourite to take a second consecutive BIG5 win.

Andrea commented briefly on her run, “I was really looking forward to it and it was a beautiful run, the weather was great! Last year I went out too quickly and struggled and ended up being really stiff the following day, so this year I started off more conservatively and it paid off.”

Andrea finished in a time of of 1:04.58 ahead of 2nd placed Vicky van der Merwe, which leaves her comfortably in the lead on the overall Big 5 Sport Challenge log. TheMomentum Health Oatwell DualX powered by PeptroPro is the second last challenge and will take place on Thursday 7 July.