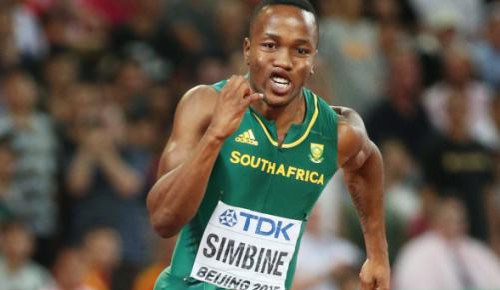 According to IOL, Akani’s time is the fifth fastest time in the world this year, with American athlete Justin Gatlin heading the list with a blistering fast 9.80 seconds that he produced at the USA Olympic Trials early in July. Akani has been threatening to run really quick times all year long, but a hamstring injury at the South African Championships slowed his progress.

Former South African record holder Henricho Bruintjies clocked the same time of 9.89 seconds in Italy on Sunday, 29 May 2016, but it did not count as the wind reading was well beyond the legal limit of +2.0m/s. The “Blitz from Klapmuts” made his return to the track on Sunday, 17 July 2016 after a hamstring injury and finished fifth in a time of 10.37 seconds.

For Akani, the 9.89 second run will be the new standard as the wind was +1.9m/s, which is just inside the legal limit. Akani made a big statement in the build up to the upcoming Olympic Games as he beat a world class field that included athletes such as Asafa Powell and American speedster Michael Rodgers. Asafa Powell finished in second, with Michael Rodgers finishing third.

Just to prove that his 100m time was no fluke, Akani followed his time up with a new personal best in the 200m of 20.16 seconds, beating his previous time of 20.23 seconds. This is a strong message from Akani to the Athletics South Africa (ASA) selectors. Akani was only chosen for the 100m for the Rio Olympics, despite having the quickest time this year of 20.29 in the longer sprint.

World Championship bronze medallist Anaso Jobodwana and teenagers Clarence Munyai and Gift Leotlela were chosen in the 200m group ahead of Akani. With performances like this becoming the norm, we are sure Akani will fly the South African flag high at the upcoming Rio Olympic Games.