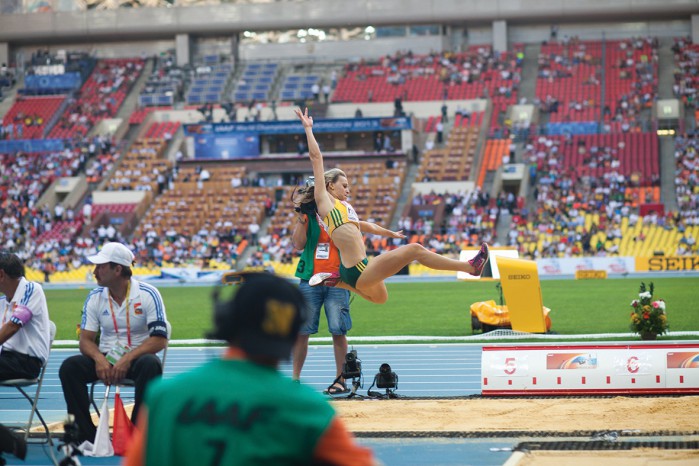 With the final names of Team SA for the Rio Olympics in August set to be announced soon, SA’s top athletes are chasing qualifying marks at local and international meets and events. Here are a few who have recently put their hands up for inclusion in the team. – BY SEAN FALCONER

In spite of bitterly cold conditions that left her feet numb for the first 15km of the London Marathon in April, Irvette van Zyl was able to post a fast 2:32:20 to make her the fastest female marathoner inside the 2:45 Olympic qualifying criteria set by SASCOC and put her in pole position for selection for Rio. She also had to overcome the obstacle of being in the process of recovering from a stomach bug the week before, and then missed her personal drink at 25km, meaning she ran without any hydration from 20km to 30km and suffered cramping in both her stomach and legs, making the last 12km very hard. With the leg cramps I knew that if even stopped for any period of time, it would have been extremely hard to get going again, so I really had to hang in there. Let’s just say I was really pleased to get to the finish line,” she said.

Hot on the heels of Irvette van Zyl’s 2:32:20 in London came news that Lebo Phalula ran 2:33:48 in just her second marathon, at the Enschede Marathon in the Netherlands. Lebo’s time is not just a PB by just over five minutes, but is just five seconds slower than Christine Kalmer’s 2:33:43 (run in Valencia, Spain late last year), and thus puts her third on the list of fastest qualifiers and provisionally on the plane to Rio. “When the girls left me running alone at 16km, I just told myself I have to be strong and run my race with my own splits, which was easy. My first aim was to finish the race and all went according my plans,” she said.

Having finally recovered from a long-term back injury, long jumper Lynique Prinsloo soared to a massive Olympic qualifier at the South African Student Championships in Limpopo at the end of April. Needing a 6.70m jump, she cleared that by a full 8cm, and said afterwards that moving to work with renowned long jump coach Emmarie Fouche at the University of Johannesburg has made the difference, on top of recovering from the three-year struggle with her back. “The wind played around with our first three jumps, on my fourth I got too much height, the fifth was a no-jump and then the last jump I came up with that 6.78. Sometimes an athlete can just feel it’s a good jump, and it felt like I was flying through the air for longer than usual.”

Dominique Scott-Efurdbooked a provisional spot in Rio when she clocked a personal best 31:56.84 for 10,000m at the Payton Jordan Invitational meeting in California, taking 15 seconds off her previous best and finishing well under the Olympic qualifying mark of 32:15. Only two South African women, Elana Meyer and Colleen De Reuck, have ever gone faster, and Dominique is just the third to break 32 minutes. Should she get the nod to compete in Rio, she will be the first SA woman to run the Olympic 10,000m since Elana won the silver medal in Barcelona in 1992. “It’s been my dream ever since I can remember to compete in the Olympics in South Africa’s green and gold,” she said. “This was a dream even before I began racing on the track.”

In the men’s 400m hurdles, Lindsay Hanekom looks to have realised his dream of booking a spot in Rio, thanks to clocking 49.03 at the ASA Open Championships in Bloemfontein in early May. His time is well inside the 49.40 qualifying time, and gives him a new personal best by 0.43 seconds. “I knew it was just a question of time before that time came! I was very, very focused ahead of my race and just went out trying to strive for perfect hurdle execution,” said Lindsay. “I was also very relaxed between my hurdles and maintained good rhythm. I’ve had a few injuries this year and didn’t have the best SA Championships, but I’ve risen above that and just came out to do my best.”