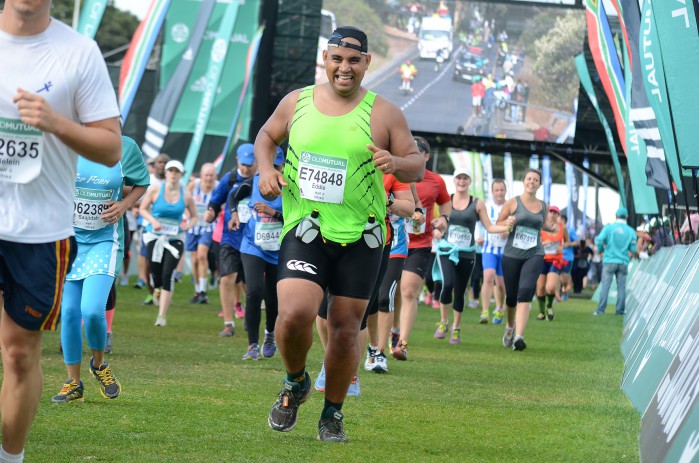 Though some think he is not exactly ‘built for running,’ former Springbok prop forward Eddie Andrews is loving his running and starting to build a collection of race medals. – BY SEAN FALCONER

The first time Eddie ran 21km, at the Mitchells Plain Titans Half in November 2014, he says his legs did not take too well to the experience. “I had started running with my friend Ruan Beneke, who has done Comrades and Ironman, and I thought he was going to run with me, but at the start he said see you later and ran a sub-two hour… I had done some 8km training runs, but I went into it a bit Kamikaze, and it took me three hours and six minutes to finish. I felt OK, but when I got back to my car, I had to sit there for half an hour before I could drive, because my legs were cramping so badly!”

A few more races followed in 2015, and this year he has already done five half marathons, but Eddie says he still gets a few surprised looks when people hear that he has taken up running – probably because rugby props are not traditionally known for their love of running. “I have actually always enjoyed running. I often used to park my car 5km from the rugby training ground and run there, then run back afterwards, and I enjoyed the 5km time trial fitness tests. My intention was always to be the fittest, most mobile prop in the team, because I weighed a bit less than the other props. I wanted to make it difficult for the coaches not to select me.”

Eddie came into rugby relatively late in life – he only played two games while in high school at Steenberg in Cape Town, as he was actually a junior provincial level hockey player, but when he put on weight after matriculating in 1995, he decided to take up club rugby to get back in shape. “I actually played lock back then, but soon moved to prop, and in 1998 I was selected for the Western Province Disas team, then the under-21s, and in 2000 I played my first official games for Province in the Vodacom Cup and Currie Cup.”

At that time the Stormers had a number of Springbok props in their squad, so Eddie remained a fringe player in Super Rugby until 2003, when several of those props retired or moved abroad or up-country. “When Gert Smal announced that I would start the first game against the Queensland Reds, I didn’t know what was happening, after having all those Springboks ahead of me. Then in 2004 we had that amazing year, reaching the Super Rugby semi-final, and the media gave me the nickname ‘Steady Eddie’ and spoke about me possibly making the Springbok team. Still, I was shocked when I saw my selection announced on TV!”

Eddie made his Bok debut against Ireland in June 2004, helped the team win the TriNations Series that year, and had earned 23 Test Caps by 2007 when a recurring back injury brought his playing days to an end, just before the World Cup. “I was injured when they announced the World Cup squad, but then BJ Botha got injured and they called to ask if I was ready to play yet. I had to say no, and watching the Boks win that final was incredibly difficult, but injury is part of the game. I am still incredibly thankful for the opportunity I got to play at that level, and for the faith the various coaches placed in me, because I didn’t come through the traditional rugby ranks, and always felt I had to do a little more to prove my worth.”

Now 39, Eddie has been married to Jackie for 17 years and they have three kids, daughters Erin (13) and Jessie (8), and son Joel (11). After retiring from rugby, he founded the non-profit Joshua Foundation with Stormers team mate Tonderai Chavhanga, to use rugby to motivate kids in Mitchells Plain and Khayalitsha, and while applying for funding with the City of Cape Town in 2011, he was asked by DA Councillor Gavin Pascoe if he would be interested in politics. “My first thought was what does a rugby player know about politics, but after talking to my wife and my pastor, I decided to stand and was elected as a Ward Councillor. I’ve got a good relationship with my community, and am enjoying the work.”

He is also currently studying part-time at UWC for a B.Admin degree, and in between family commitments, council work and studies, Eddie says the running keeps him fit and healthy, and he has set himself a target of one half marathon per month. “I would like to do a marathon some day, but for now 21 kays is enough. The good news is that my eldest daughter is now getting into running as well, and she has influence over the others… They don’t know it yet, but one day they’re all going to run with me!”