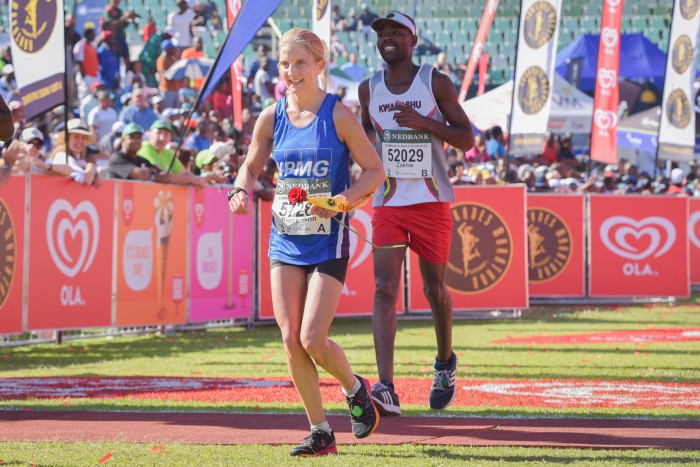 2 Jun 201617 May 2019 Modern AthleteColumns
Share
Tweet
0 Shares
The 2016 Comrades Marathon proved one of the most dramatic and exciting races in years as the men’s record tumbled and the women’s race delivered an unexpected, agonising finish. Various men set a blistering pace from the start, but when David Gatebe of the new TomTom Club took the lead in Kloof and successfully flew down the dreaded Fields Hill, thoughts began to turn to a new course record. He had not been considered one of the pre-race favourites, having only earned three silvers in his previous Comrades runs, but he came home in 5:18:19 to obliterate Leonid Shvetsov's 2007 course record (5:20:41). He was followed in by 2012 winner Modibe Ludwick Mamabolo (Nedbank, 5:24:05) and then 2014 winner Bongmusa Mthembu (Arthurd Ford, 5:26:39) – the first time South Africans took all three podium places since 1992!
David now has the unique distinction of being the only male runner who has won the SA Marathon title, the Two Oceans and the Comrades. Meanwhile, his coach, John Hamlett, can now lay claim to mentoring four Comrades winners: Andrew Kelehe (2001), Fusi Nhlapo (2003), Gift Kelehe (2015) and David.
In the women’s race, it looked like KPMG’s Caroline W?rstmann was going to add the Comrades title to her Om Die Dam and Two Oceans titles of earlier this year, to complete a unique treble and also become the first woman to do the Two Oceans and Comrades Double in consecutive years. However, her 11-minute lead was steadily whittled away as she struggled with cramping legs, nearly being hit by two motorcycles and a fall in the latter stages, and she could not respond as Charne Bosman (Nedbank) passed her within two kilometres of the finish to win the race in 6:25:55. Caroline held on for second in 6:30:44, with Sweden’s Kajsa Berg (Nedbank) third in 6:39:04.
Look out for the full stories of David and Charne’s wins in the July edition of Modern Athlete, as well as many of the other inspirational stories to come out of the 2016 Comrades Marathon.