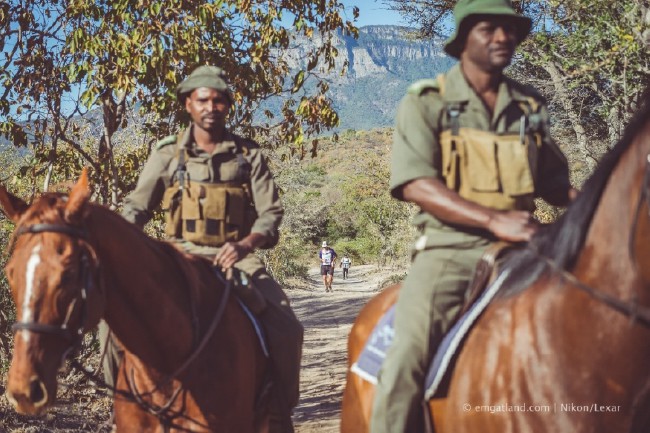 Muzi Madikwa recently won the rugged two-day Old Mutual Wild Series Kruger2Canyon Challenge. Although competition was strong, Muzi was able to see off a thrilling challenge from several top trail runners. Take a look at some of the highlights of the event!

The combined 72km course took runners through some of the most pristine areas around Kampersrus on the northernmost tip of the Drakensberg escarpment. Runners came across some of South Africa’s most prestigious wildlife and sightings of wild dog, giraffe as well as honey badgers were reported.

The women’s category was dominated by Carine Gagiano, who won by more than 30 minutes. The men’s category was highly competitive, with youngsters from the “Change A Life” Academy and the newly formed Old Mutual Development Team challenging the established stars.

Both Muzi and Bennie recently completed the Comrades Marathon. Quite a mean feat to be able to conquer both these races in such a short space of time!

The opening 42km stage explored the Mariepskop Trails, through the picturesque Blyde River Canyon. The 28km second stage took place in the Blue Canyon Conservancy. This is a Big Four reserve which lies adjacent to the Kruger National Park.

Race director of this year’s race, Andrew Booth, said: “Don’t underestimate the challenge that this event poses. Each and every individual that crossed the finish line has achieved something great on a personal level while contributing to conservation.”

The Old Mutual Wild Series events take part in protected areas that runners would not be able to access normally. The funds raised through the staging of the events go towards the conservation of these unique landscapes and natural heritage.

For more information on the Old Mutual Wild Series events, click here or click here to become a fundraiser!