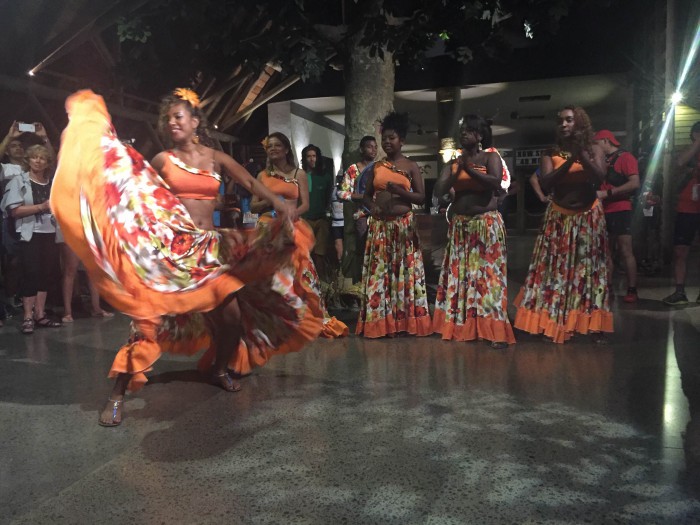 Modern Athlete was recently given a once in a lifetime opportunity to go cover the Royal Raid Trail Run, organised by LUX* Sports in Mauritius! Courtesy of the LUX* Resorts and Hotels, we were treated to a five-star experience, staying at the LUX* Le Morne. Roxanne Martin was our reporter on the ground and brings the experience back to a somewhat colder South Africa!

Boarding the Air Mauritius Flight, you are given a small taste of the paradise that awaits you… images of white sand beaches with red umbrellas fill the screens of the planes, and a tropical blue seat puts you in the mood for that first cocktail. The flight is a mere four hours, and you have great in-flight food and entertainment to keep you busy while you while the minutes away.

Upon arrival we were greeted with cool towels to wipe away the sweat and grime that comes with travel. Cool and refreshed, we climbed into our transfer vehicle for the hour and a half drive to our hotel. Driving in the dark of night, we weren’t afforded the luxury of taking in the scenery, but we were still struck by the architecture: Flat roofs, with houses all on top of one another, clearly space in Mauritius is used where space is found! That being said, it was incredibly clean, no litter in the streets, and even at 10 at night, many people were still out and about.

Driving into the hotel you knew you were in for something special. Greeted again with a cool towel and a refreshing orange mist spray was just the beginning. Walking up the stairs to reception, you were greeted with a magical view of a beautiful pool surrounded by lights, whereas the seas was not in view due to it being dark, but having the gentle sound of waves in the background filled you with excitement for the next day.

A Piece of Paradise

The rooms were spectacular, set to the perfect temperature so you walked in and felt refreshed. Even in winter the average temperature per day on the island is a balmy 28 degrees! A king-sized bed is standard, big screen TV, plus an iPad, and when you walk into the bathroom you are greeted with a massive tub, shower and walk-in closet. Every need or desire is catered for, and there are special little ‘Lux’ touches as well, like the toiletries in the room coming from their spa boutique, all specially designed for the hotel. The body wash even has a touch of citronella in to keep away those pesky mosquitoes!

Waking up the next morning feeling refreshed and invigorated, opening the curtains revealed what can only be described as paradise! Palm trees filled with coconuts, a pool that belonged in a fairy tale, and a beach that begged for a cocktail in one hand and a book in another. Meals at the hotel were all about variety, a themed buffet meant you were spoilt for choice, making every meal an adventure of culinary delights with world cuisines – no calorie-counting allowed, you ate to worry about it later.

Water activities like snorkelling, water-skiing, windsurfing and paddle boats are included, so all guests have the opportunity to experience the tropical landscape from the water. There is also scuba diving and kite surfing, so you are able to work off those calories if you need to. The beaches are filled with reclining cushioned deckchairs, so you can lie back and work on your tan while being served cocktails and snacks throughout the day. With two pools, you are spoilt for choice, although the one has an ice-cream bar, making it the more attractive option!

Having had a rested and relaxed day, our legs were ready for the 15km trail run that awaited us the next day. The Royal Raid has thee distances, the 15km being the shortest, along with a 35km and an 80km for the brave. Not being an experienced runner, the 15km seemed the safer option for me. Our transfer arrived at 4:30am to take us to the start of the 80km at Casela Bird Park, where a field of 127 runners waited nervously as music and dancers performed. Starting in the dark, all the runners sported headlamps as they did final preparation for the tough course with over 2000m of climbing. At 6am they were off, starting what would be for many a 12-hour journey, whereas for some that I deem incredibly brave, 17 hours awaited as they navigated the tough route!

Thankfully for us, the lighter 15km option awaited, but don’t think this was the easy way out. The course still had many a challenging aspect, with steep climbing and muddy, rocky descents. My first introduction to ‘real’ trail running, it was an experience that showed me some of the best sites that Mauritius has to offer. Lush green landscapes with the sea as backdrop waited after every climb. You simply had to stop and take a minute to just breathe it in. Running through forests, you were transported to a place time has seemingly forgotten. It was a fantastic run, and all trail runners should attempt this race if given the opportunity. I know that given half the chance, I will be on that start line again next year!

Recovery the following day was just what the doctor ordered: From beach time with ice cream and cocktails, to a spa treatment and a massage for the weary legs. Ending the day with the magnificent sunset, a beer in hand, and the smooth gentle sounds of the saxophone in the background, you knew paradise had found you, and you never wanted to leave.

If you too want to have a tropical experience on the island of Mauritius, you can, thanks to Go Sports Travel in partnership with Air Mauritius and LUX* Resorts & Hotels. We are giving you the chance to win an all-expenses paid trip to Mauritius to take part in the LUX* Mauritius Marathon! This is the perfect opportunity to escape the Winter Chill and head off for warmer weather, and maybe a cocktail or two.

Click on the link below, fill out your details and hit Enter – it’s that easy!

But wait, there’s more… Refer friends using our 'Refer a Friend' form, and if they enter the competition as well, you will gain more entries into the competition! There is no limit on how many friends you can refer, so run with it!