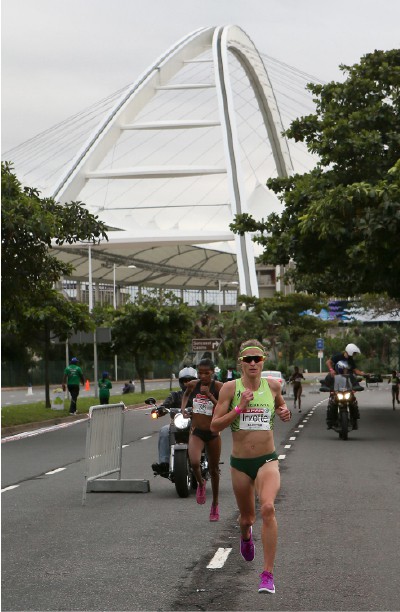 Irvette went into the lead from the start and ran side by side with Rutendo Nyahora until the three kilometre mark, when she surged into the lead. “I had a fall in training two weeks ago, and hurt my knee. I thought about not running today but I wanted to make sure that I didn’t fall too far behind in the Grand Prix,” said Irvette.

“I expected the other runners to start faster than they did, but when it seemed that nobody wanted to run fast, it played into my hands. I was quite shocked when we got to six kilometres and I saw I had quite a big lead. My training hadn’t gone as well as I would have liked but I am very happy that I ran today and very happy that I won.”

Irvette, who has not been beaten on home soil this year, said her focus from now on would be training for the marathon at the Olympic Games in Rio de Janeiro in August. “Winning races gives you confidence, but I also get confidence from training. When I went to the Olympics in London, it was quite overwhelming, but I think I will be better prepared this time because I know what to expect.”

Cornelia Joubert said she was thrilled to have come second. “Last year I came fourth, with a better time, but I am so happy to have come second. I trained very hard for this race, and will be training for the rest of the SPAR races this year. Durban is just the place for me, I think,” Cornelia said.

Diana-Lebo Phalula said she was disappointed with her time, although she was surprised to have finished in the top three. “My focus now is on preparing for the marathon in Rio. We need to run faster times in South Africa if we are going to succeed overseas,” she said.