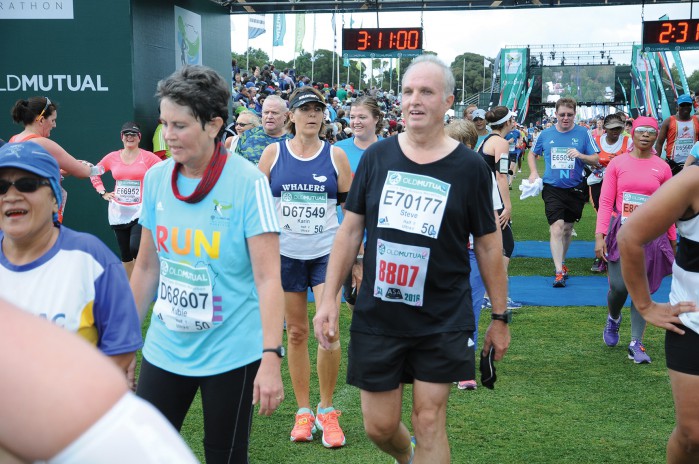 Watching my daughter go from non-runner to half marathon finisher and sharing the roads on her journey made for a most special memory. – BY STEVE REES

Towards the end of 2015, Lara joined my wife and I, regular Modderfontein parkrun participants, on our Saturday morning parkruns. (My wife and I both have our red “50” T-shirts.) When Lara first joined parkrun, we had very similar times, but once again, within a very short space of time, Lara finished way ahead of me! She then joined the Greenstone Hills Running Club, and with club runs, encouragement and motivation from members, Lara’s love of running grew and she achieved better and better results.

21st With a Difference

Lara decided she wanted to do something really memorable for her 21st birthday in 2016. Rather than a party, she decided she wanted to run 21km for her 21st. Now, the iconic Old Mutual Two Oceans Half Marathon was ideally suited, as this was run on the 26th March, and Lara’s birthday was on the 28th March, but we had been warned that the registration process for the Two Oceans was challenging, as there were so many prospective participants. This proved to be true and we spent almost one whole day online with numerous panics when the registration page crashed! Eventually, we were both able to register for the 2016 OMTOM!

However, early in January Lara began to complain of a pain in her ankle after doing the Dischem 21km. Initially, after a visit to a physiotherapist, the diagnosis was a strained tendon caused predominantly by incorrect shoes. Massages, new shoes and a short rest period were prescribed, but the new shoes and rest made no difference. In fact, the pain intensified, and with Two Oceans approaching rapidly, Lara began to think that this injury could prevent her from competing. The seriousness of her injury was confirmed, after visiting a different physiotherapist, when a scan revealed a stress fracture in her ankle! So, at the end of January, Lara was told that in order for her ankle to heal in time for Two Oceans, she would not be able to run at all until then!

This was devastating news and Lara began to think that her dream of running the Two Oceans 21km race for her 21st may not happen. How could she train? The sports physiotherapist prescribed a programme of spinning and ‘water running,’ and allowed Lara to continue her usual weight training, so Lara obtained a flotation belt for the pool and spent hours ‘water running’ in what was often pretty cold water. She approached this new training with the same conviction she had for her running – she still got up at 3:45am, and instead of going for a run, she followed her revised training programme.

Lara and I duly lined up at the start of the 2016 Two Oceans Half Marathon in pouring cold rain, nervous of what lay ahead and concerned whether Lara’s ankle would be ok. This would be the first time she had run in two months. She wore an ankle brace and we hoped for the best. In commemoration of our Two Oceans half marathon, Lara had a special T-shirt made with the words “Strong Alone Unstoppable Together” on the back. This encapsulated the journey that we travelled together as a family to take part in the Two Oceans. It also echoed the Two Oceans slogan, “Run As One.”

Happily, her ankle held up and La and I finished the Two Oceans 21km and received our treasured medals. We now have plans to do it all again next year! We could not have achieved this without the support and understanding of our family and friends, so thank you Marisa, big sister Kate, George and Mel. Strong Alone, Unstoppable Together!