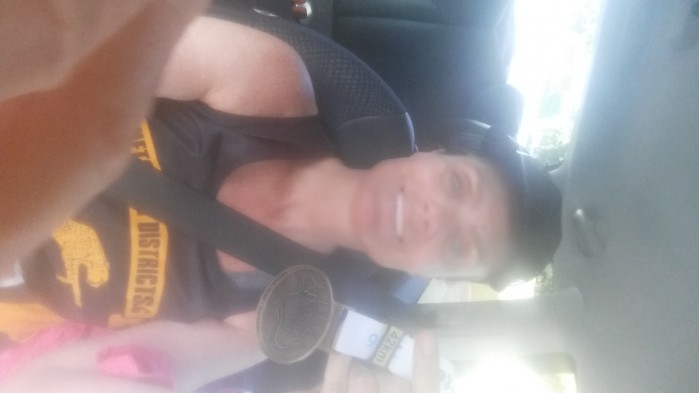 One year on……..from 5km to 42km in 365 days.
That’s the story of this middle of the road fatty, who, on May 1st 2015 quite literally huffed and puffed her way to a Deloitte Challenge 5km medal and exactly one year later, at the 2016 Challenge, “ground” through 42km for an eagerly desired finisher’s medal. Not that I didn’t “hit the wall”, think seriously about “bailing”, question my sanity, mutter and scowl while plodding the hills, wonder where everyone was on the flat sections plus question the marshals during the last 5km as to why the finish line had been moved. At the end of it all, my name is written in the annals of KwaZulu-Natal’s marathon history.
Let the record show; I love marathons. Lead me to the start line of the next, and the next, and the next, and the next, and the……get my point?
Please allow me to emphasise my marathon running future in the words of that ever popular ’60 – ‘70s pop group, The Hollies and their ’69 mash hit, He Ain’t Heavy, He’s My Brother;
The road is long, With many a winding turns, That leads us to who knows where, Who knows where?
The road running bug has not so much bitten but rather wedged itself into every fibre of my being.
Three marathons medals hanging on the wall and there’s loads of room for many, many more. I’ve reached the stage in this matter of regular running where; no run – no smile, which I understand is the psychological disposition of a marathon runner. Life is miserable without my daily run.
What continues to astound me in my pursuit of distance running medals is that I have also reached the place where it hardly seems worthwhile gearing up for a 10km run. Can this really be? Is this what I have become? Is this the same person, who after her initial foray into the world of road running, was virtually brought to her knees (not in the Biblical sense you understand) from exhaustion after what would now be considered warm-up?
How well I recall that first Deloitte Challenge 5km in ‘15. Every aspect of the event was overwhelming. The large crowd of runners, the route, the aches and pains during the run and not least of all, the uncertainly of whether I would be able to stand upright while receiving my medal after suffering oxygen deprivation during the final kilometre These reflections still leave me with a profound sense of wonder and accomplishment.
My three ’16 marathons each have special memories indelibly etched in my mind.
‘Maritzburg City Marathon, my first, screamed with fear of the unknown. Is this for real? I have no idea of the route. What do I eat along the way? Can I go the distance? Will my legs hold out? Can I finish? What if……? The finish line……so soon? One down. First 42km finishers medal EVER. Happiness is……
Number two, Veralum; the loneliness of the long distance runner. Where has everyone gone? Why is it so quiet here…..? There’s no one to talk to……dogs aren’t even barking. All I can see is sugar cane. Why am I doing this? Am I having fun yet? What……my second medal already? Watch me drill this one next year
The Deloitte Challenge, my third 42km, had me questioning (rather brashly I’m afraid); who said there were no steep climbs in this marathon? Is this the race everyone said was downhill? Road runners speak with fork tongue……I’m in another race ……I’m on the wrong road, I can feel it. Where are the down hills everyone talked about and why have all the marshals gone home early? I can see the finish line; 500m to go……time to celebrate……another one bites the dust
A week later I attempted the Durban City Marathon but with KZN receiving its total summer rain fall in one weekend, I hauled my drenched, soggy body and shoes to a 21km medal. The proverbial water, water everywhere never rang truer.
This year has also registered a number of growth areas in my life. There has been an increase in my pain threshold. I have met a variety of medical practitioners whom under normal circumstances I would have not known existed. I have discovered a host of over the counter pain remedies. I have explored a world of diets previously unbeknown to me plus I have taken on an entirely new athletic vocabulary. I have also mastered new codes; LSD, PB, Negative Splits, DNS, DNF and VO2Max, plus I have taken to mixing my drinks while on the run. I also now treat pain with ice. In addition I go to bed tired and I wake up tired each morning.
Oh……and have I mentioned I now consume enough food and drink for three obese adults?
And in that my dear readers, lies the agony of my new found passion – I am still a middle of the road fatty. I don’t do weight loss.
I wonder why?