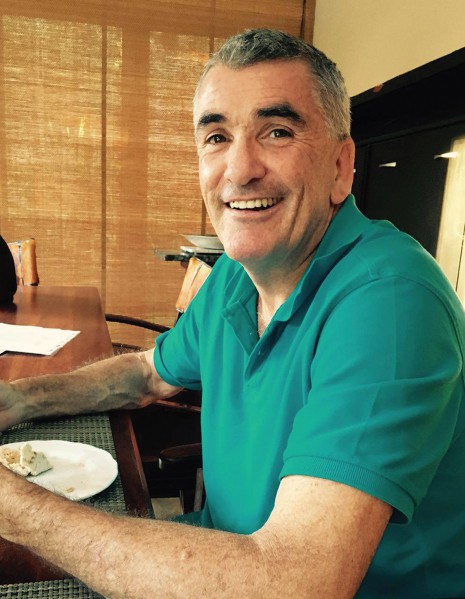 18 May 201617 May 2019 Modern AthleteColumns
Share
Tweet
0 Shares
At this year’s Comrades Marathon, Peter McCann plans to complete his 20th Comrades, and then he will finally listen to his doctor and hang up his long distance running shoes, but he says he’s not quite ready to hang them up completely. – BY SEAN FALCONER
The last few years have been a bit of a medical rollercoaster for Peter McCann of the Jeppe Quondam club in Johannesburg. “A few weeks before the 2011 Comrades, I was doing a 60km long training run when I felt pain in my chest, but being a typical ex-rugby player, I carried on running. My wife Janine convinced me to go for a check-up, and the scans found that I had a deep vein thrombosis in my calf, with two blood clots having broken off and ended up in my lungs! I was actually quite lucky, because it happened halfway through a training run… If I had started the Comrades that year, I would probably be dead.”
He duly sat the 2011 Comrades out, the first one he had missed since his first in 1996, but two more medals followed in 2012 and 2013. Then Peter began to experience pain in his hips, and x-rays showed that he had developed osteoarthritis. “The specialist wanted to book me in for a double hip replacement, but I told him I can’t do it yet, because I’ve got three more Comrades to run to get to 20. I turn 58 this year and would have to run till I am 68 in order to get to 30 medals, and that’s just not going to happen, so this will be my last Comrades. I gave myself three more years, and now I am down to just a few weeks…”
Late Starter
Peter was born in Ireland and his parents came out to South Africa when he was five years old. He took up rugby at school, and says quite adamantly that he was no runner. “The only running I did was the compulsory cross-country or track meet once a year.” After school he joined the Jeppe Quondam Sports Club in 1978, playing rugby for the Old Boys’ team as well as hockey. Then in 1995 his younger brother Eamonn ran his first of 13 Comrades Marathons and Peter thought it was a good idea, so a year later, aged 37, he ran his first alongside Eamonn and older brother Jimmy. “I had no previous ambition to run the Comrades, and it was only when Eamonn took up running and started to look so good that I also joined – I only really went along to lose weight!” says Peter, who finished in 9:39:57.
Peter describes himself as “just an Average Joe runner,” but he has three Bill Rowans in his Comrades collection, and ran a marathon PB of 3:19 when he turned 50. Thanks to his running track record, he is seen as one of the senior statesmen in the Jeppe club, helping to lead some of the training schools over the years, as well as guide many novices to a solid finish in the big races. “I can run steady if not with any great speed, so many of the youngsters tag onto me. I enjoy their stimulating conversation, so enjoy running with them, and it makes it a pleasure to go for training runs in the mornings. I think that that due to my age and maturity, they must assume I know what I am talking about! I’m just happy to still be running with this next generation… it’s nice to be with people who are happy to be running, full of life and energy. But I can’t go drinking with them… I’m now the boring old guy that goes along as designated driver,” he jokes.
Not Quite Done Yet…
Peter currently works for Liberty as a financial adviser while Janine is a director in a stock brokerage firm, and they have two grown up daughters. “My family has made big sacrifices for my running career over the years, and that is why I have decided that 20 years is now enough for Comrades,” says Peter. “Following the op, it looks like no more heavy pounding for me, so golf, swimming or cycling would be my only alternatives, but I’ve never been much good at any of them. So, I don’t want to hang up my shoes completely, but I will be done with the long distances. I still want to do the 10s and maybe a few 21s, but it will depend on what the specialist says. I know of people who still run Comrades after a hip replacement, but I don’t want to be stupid and then need to get it done again. Most of all I just don’t want to feel useless…”
Share
Tweet
0 Shares