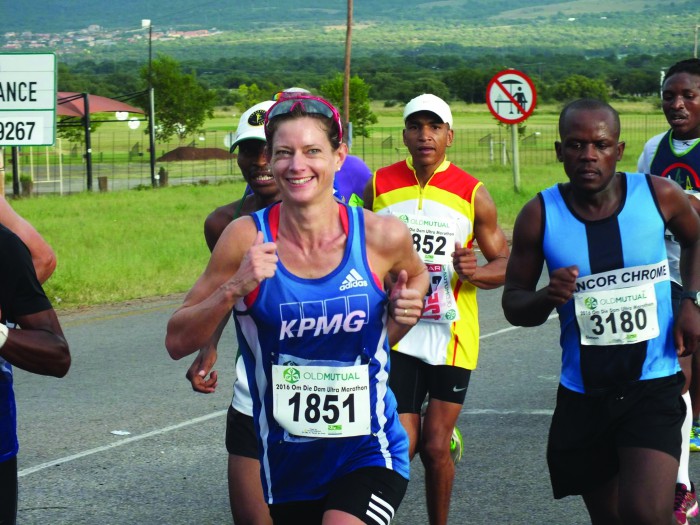 On Sunday, 29 May 2016, Caroline Wöstmann of KPMG Running Club will try and achieve something that no other female athlete has done before. She will attempt to win both the Old Mutual Two Oceans Marathon as well as the Comrades Marathon in two consecutive years.

Derek Preiss is the only athlete so far that was able to do so. He did so in 1974 and 1975. With her victory in last year’s Comrades, Wöstmann, who trains at the High Performance Centre (HPC),became only the fourth athlete ever to win the Old Mutual Two Oceans Marathon as well as the Comrades Marathonin the same year.

Lindsey Parry (head coach at Tuks/HPC) emphasized that making running history will not be what the Comrades will be about for Wöstmann on Sunday.

“Caroline’s only focus will be to stick to the race plan we agreed on. I think we have planned a good race. I know you can never expect to win a race but we are expecting to be competitive.  The good thing is that, as far as I am concerned, there is no pressure on Caroline. The fact that she has won the Two Oceans means that she has already achieved a great result for the year.”

What does it take to win Comrades?

“It is no secret. The fastest time on the day will win the race and we are aiming to run the fastest time. It is not impossible for Caroline to go under six hours but that is not our target.”

Parry expects that the women’s race might boil down to a battle between Wöstmann, Charné Bosman and Britain’s Ellie Greenwood. Last year Bosman, who also trains at the HPC, was second and Greenwood finished second in 2014.

“Quite a few other talented runners will also be competing. For example, Sweden’s Kajsa Berg who finished 2nd last September in the World 100km Championships in Winschoten, the Netherlands, but it is important to keep in mind that nobody just ‘rocks up’ at Comrades and wins. You first have to pay your dues.”

According to Parry, the unknown factors in the race will be Tanith Maxwell, a former Olympian marathon athlete, and Colleen de Reuck, a SA Olympian who now lives in the USA.  Although De Reuck is 52 already, Parry is confident that she will finish in the top ten.

Parry prefers not to make predictions about what might happen if Wöstmann and Bosman should be the two athletes to duel it out over the final kilometres.

“I coach both of them so I try not to play them off against each other. If Charné remembers to stick to her game plan it could be a very interesting race.”

Asked if he made drastic changes to the training programs of Wöstmann and Bosman since last year when they prepared for the ‘up-run’ (Durban to Pietermaritzburg), Parry said: “The fundamentals of running Comrades remain the same. In both the up and down runs the first 27 kilometres are the hardest part of the course.”