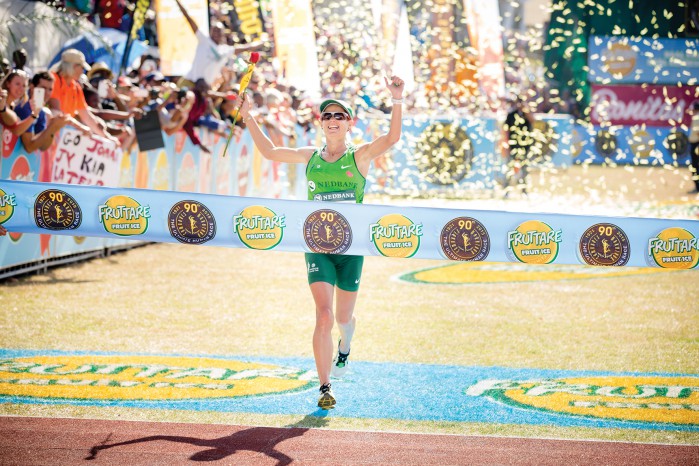 Asking a runner to walk is like asking a shark to stop swimming… it’s never going to happen! But, what if it means running a PB at your next race? What if it means finishing your first marathon? What if it means guaranteeing your Comrades medal? That makes most runners think again! So here’s how to implement it in training and racing to best benefit your running. – BY RAY ORCHISON

In last year’s Comrades Marathon, Caroline W?stmann ran herself not only to a first place in the women’s race, but also into the hearts and minds of almost every South African. And she did so by leaving the commentary team and viewers across the nation scratching their heads with her run/walk approach on race day. One could almost sense the entire country holding its breath as Caroline suddenly slowed right down just after Botha’s Hill and started to, of all things, walk! Everyone watching the race was almost certain that she had gone out too hard and was now being forced to walk. Of course, she was in fact running the race with a planned run/walk strategy, which in the end saw her not only thrash the famous Nurgalieva Russian twins, who have dominated the Comrades in recent years, but also saw her cross the finish line with an average pace that would have almost certainly broken the Up-run record had it not been for the additional 800m added to the 2015 route as a result of road works.

Suddenly, runners all around the country were talking about this brilliant new run/walk strategy for racing, but it is by no means a new concept – well-known American coach and author Jeff Galloway has been using and promoting a run/walk strategy since 1974!

Why walk when you can run?

Now, going into an ultra like the Two Oceans or Comrades Marathon without a run/walk strategy in many cases ends up with lots and lots of walking, and a very long day out. You might be thinking to yourself, “So what’s the problem? I’ll run until I can’t run anymore, and then I’ll walk.” The problem with this thinking is that the walking at that point in the race becomes a defeated walk… You know your race is over and you end up walking with your head down, dreams smashed, and where it should have taken you perhaps 40 or 50 minutes to complete the last 8km, it now takes you 90 minutes.

A run/walk strategy however, is exactly that. It’s a strategy. It’s a plan, a well thought out approach to your race, and when you now deliberately walk during the race, it’s not a defeated walk at all, but rather part of the plan. And there are a number of reasons why a run/walk strategy works, and why you should be giving it a try:

·         There aren’t measured statistics, but in my experience, probably 90% of all runners will start a race too fast. And I get it… It’s a race, the nerves are on full alert and adrenaline is coursing through your veins. However, having a planned first walk just a few kays into the race gives you the opportunity to settle, bring the heart rate down and then to get going again at the correct pace.

·         It allows you to maintain a consistent running pace because you’re allowing short bouts of recovery between running efforts. In other words, it extends your energy stores.

·         Running is a repetitive motion whereby you use the same muscles in the same way for the entire duration of the race. This leads to muscle fatigue, especially over long races. For a race like Comrades, you cannot train for this fatigue by running the race distance a few times before race day. You’re going to need other ways of reducing this muscle fatigue. A run/walk allows just that, because throwing in a walk every few kays gives your muscles much needed, albeit short rest and recovery to keep you going.

·         You’ll actually gain time over distance! This one blows the mind, but it’s true. As fatigue builds and energy levels drop during a race, we begin to slow down. Just have a look at pretty much any race splits and you’ll notice that most of the field run positive splits. That is, most of the field run a slower second half. Because a run/walk strategy conserves energy and keeps fatigue under control, you will find that you are now in a position to run a faster second half and essentially speed up in the latter stages of the race.

The most important part of a run/walk strategy is actually putting it into practice during training. Because walking fires up the muscles in a slightly different way, you’ll find it quite tough initially to get running again. This has a physiological element to it, but it also has a lot to do with simply teaching the head to come on board with what you’re doing. So, as they say in the classics, practice makes perfect!

When it comes to planning your strategy, here are a few guidelines:

·         This is a strategy, so use it to your strengths and weaknesses. If you’re coming up to a planned walk but you know there’s a massive hill around the corner, and hills are your weakness, then delay the walk for a few minutes and use it on the hill.

I could write an entire book on this subject, but chances are that unless you actually see this in action, you’ll never believe it works. So, here’s a challenge for you. At your next race, be it 10km, a half marathon or an ultra, go into the race with a planned run/walk strategy. During your first walk, which might only be 30 seconds long, depending on the distance of the race, make a mental note of the runners who come flying past you. Then see how many of those runners finish before you. In most cases, it will be zero. That’s because a run/walk strategy can be the difference between your next race being great, or a complete disaster, so why not give it a try?