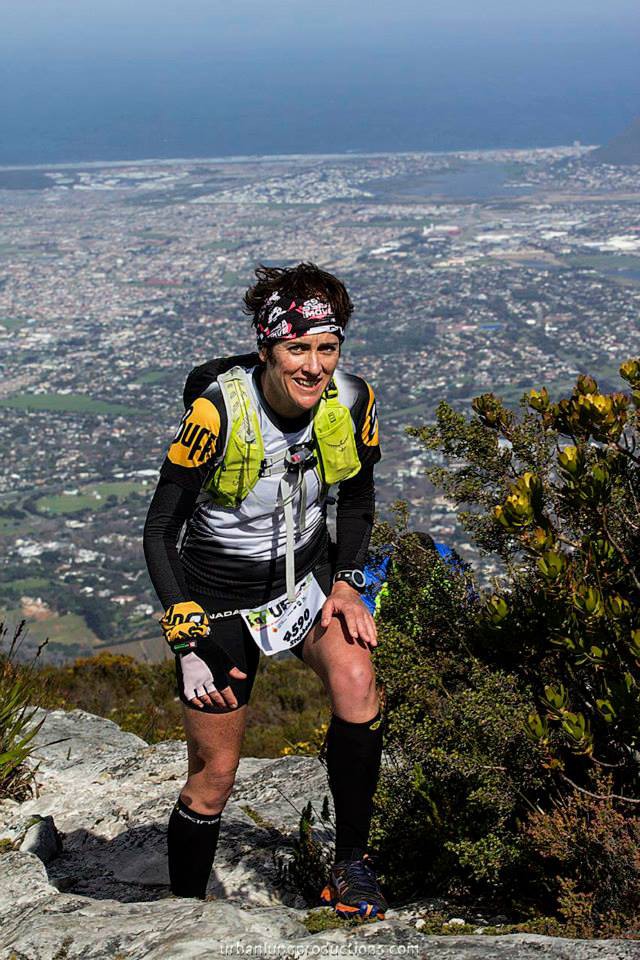 On 18 January, Cape Town-based runner Kim Stephens wrote a Facebook status update about President Jacob Zuma and running. Within days it had gone viral and been shared over 20,000 times, featured in the news, and Kim had been asked to do interviews for several radio stations and newspapers. As the 36-year-old explains, it was just something she felt like saying, and she had no idea the effect it would have on people… – BY SEAN FALCONER

“I feel like Zuma needs to go for a run. Takkies on, lube up, head out for a trot, sir. One foot in front of the other, on the pavements of your country. Pass your voters, and non-voters. You can't tell them apart via race, sir. Foot in an uncovered manhole? Sorry about that. Dodge the human waste of the homeless. Run on. Wide berth around the tik-head that might take your emergency R20 Coca-Cola cash. Run. Run some more. Pass the businesses advertising closing down sales, the derelict office blocks. Pass the homes with laundry hanging on communal fences. High-five the babies playing in dirt. Steer clear of the children that should be in school. The school with the long drop, no text books, and an underpaid teacher. Run, Zuma.

Greet the doctors and nurses stumbling bleary-eyed on to public transport to return home after a 48-hour shift for pittance. Breathe deeply as you pass the sewerage pumping into the sea. Smell that? Nearly halfway now, Zuma. Sweating? Run some more. The committed flower-seller, the Big Issue peddler, the beggar. Another beggar. Oh, look sharp, Zuma! Stay right, blue light brigade coming through. Big cars, flashing lights. Someone more important than the man voluntarily patrolling his neighbourhood to protect his children and neighbours. More important than the Big Issue salesman, the beggar. VIP in a big ass car. Run on.

Pass the men sitting on upturned boxes waiting for manual work. Any work. Around the pothole. Climb higher. Run that hill, now. Report the water gushing out of an unkempt pipe as you run by. Spare a thought for the farmers suffering through the drought while you do so. Climb. Push up, past the sprawling informal settlement awaiting housing. You might want to keep your head down here, sir, as you promised them service delivery in return for their votes… years ago. Keep going.

Now from that summit, as you sweat, look down. Look at your people, voters and non. See the big shot businessman quietly funding a school project. See the housewife paying school fees for another woman's children. Look at that beach clean-up team, the students volunteering in an orphanage and the food parcels arriving from a leading grocery chain. You didn't, so they did. Observe the community spirit when a fire breaks out and ravages the shacks of an under-resourced community. Or when a fire ravages part of our precious natural heritage.

Look far from your vantage point and note the unity, mixed marriages, mixed families, students of all races standing together for a common cause. See the colour-blind children of South Africa. Observe keenly the pain and suffering of the poor, with their lack of role models and inefficient education. Take note of the growing force that is standing up against you, to uplift the poor and bring about true equality. See the privileged communities becoming aware of their position, and using it to improve the lives of others. You didn't, so they did. Now run home, Zuma. Back to your 20th child. Back to a life of luxury and total lack of empathy. Mind you don't trip on your shoelace as you go.”

Overnight Fame
Kim says that she put her thoughts into a running context because the sport plays such a central role in her life, but the post was just something she felt like saying, given her concerns about what is happening in SA at the moment. “I am passionately pro-SA and all its beauty, diversity, and complexities, but I don't claim to know it all, and this was just a Facebook status update. I certainly did not pen something with the intention of gaining such a vast reaction, and never in a million years did I think I would be managing personal media appearances and permissions over a Facebook status update.”

“Some people sharing my post absorbed my intention and the messages I received from around SA blew me away. We're beautiful, the citizens of this crazy land, and hopeful, and so strong. Unfortunately, others turned it into something else and sprinkled it with their own agendas, but every negative comment was an opportunity for me to learn. And to those who said that I was posting from a privileged perspective – you're right, I am very privileged, compared to the vast majority of South Africans. That is what moves me to want to see change. I am also passionate about understanding our divides, and finding ways to bring us all closer together, because united we’ll thrive. We need to be cognisant of our past, and positive about our future. We need to give back, uplift and listen.”

Late to Running
Born and raised in the Western Cape, Kim moved to PE at 15 and finished her schooling there, but says she was definitely not sporty. She studied business communications after school, then started a family, moved back to Cape Town, and after her third child, a friend encouraged to her to start walking to lose the baby weight. “I entered the Knysna Forest Half Marathon, which I ran to raise money for a charity that created maternity packs for hospitals. It took me forever to finish, over three hours, but when I came in, I said to my dad I think I’m ready for Comrades!”

As Kim upped her mileage, so she found that she loved the ultras most, and today she has run Comrades twice, done the Two Oceans ultra twice, plus two Puffers and three Otters. “I have an equal love for road and trail – trail running is a spiritual place with beauty that can’t be beaten, but on the road I can just switch off and meditate through the motion. Also, I love road running because it’s one of few communities in SA that is fully integrated. Once we’re all in club kit, nobody knows how much money you have or what job you do – that can’t make you run faster.”

Mixed Reactions
Kim says that the initial media circus around her post lasted a week or two, but things soon quietened down again. Still, she says her efforts to get people thinking will not end there. “I am still getting three or four friend requests a day, and I’ve had amazing conversations with people from all over SA who wanted to converse, not fight. It was very uplifting to see how many people are willing to hold hands and run for the finish line together. That doesn't mean we must stop talking and listening, learning more about the communities around us, and letting go of the prejudices that hold us back. We need to keep running and connecting. Also, I have learnt much through the journey… including, if you write something that might catapult you to some kind of temporary internet fame, use paragraphs!”

Ed’s Note: The publication of Kim’s piece is in no way a reflection of any political views held by Modern Athlete magazine and its staff. Also note that we inserted paragraph breaks in her original Facebook post to make reading it easier.