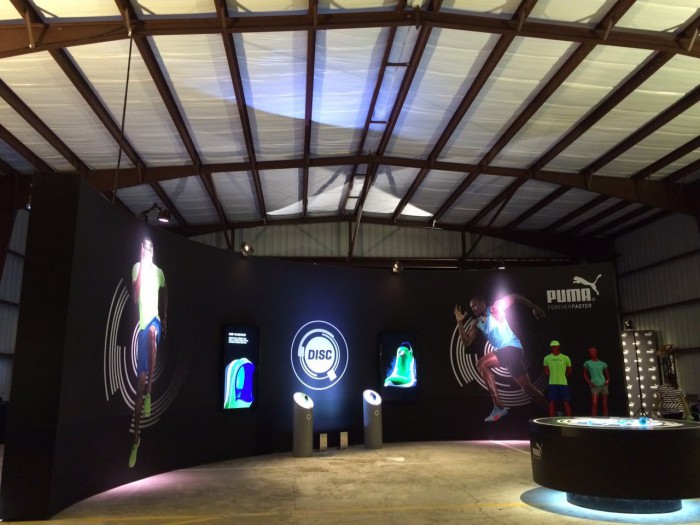 Our Modern Athlete correspondent Ciara Picco brings us the experience of rubbing shoulders with the rich and famous while attending the very exclusive Puma Disc Launch in Jamaica!

When leaving for the launch we were told to bring our passports with, that was it. I grabbed mine got in my transfers and drove out of town traffic to our unknown destination.

It was an airfield! How exciting!

Once going through security checks we congregated in the enclosed area at the start of the apron, and when the time was right we were called onto the apron to stand in front of a hangar. This turned out to be so apt with the Disc Ignite and the Disc Spike having a similar amount of engineering in them as a small plane.

Adam Petrick, Global director of Brand and Marketing at PUMA, gave us a historical view of the German engineered shoe and its beginnings 25years ago. From its conception the shoe has gone from strength to strength branching into more than just track and field.

From here came the introduction of Kohei Hagio PUMA'S Senior Head of Product Line Management for Running and Training Footwear. Kohei took us through the two products, the advancement in technology and the key features of each shoe.

What is most exciting about the brand is that they test their products with the young athletes who compete at the boys and girls national champs. Not only does this give PUMA really quick in-competition feedback but it also allows those boys and girls an opportunity to be supported to do their best in the competition by way of using top quality equipment. So it creates a win-win balance for both PUMA and the athlete which in turn is crucial for the development of track and field.

This became apparent while speaking to Jevon Francis (21), who in his time at the boys and girls champs broke the 400m record once held by Usain Bolt.

He told me when he was a young teen teachers and friends convinced him to participate in track and field even though his first love was football. He showed promise and was given a pair of spikes which he took home and kicked ball in. His mum scolded him and said to him to respect what he had been given, because it was given to him and him alone to do great things with. From that day on Jevon worked at track and trained everyday harder and longer than any of his team mates until he surpassed the expectations of even his coach. Jevon said that if it weren't for track and field and the support he has received from PUMA he would have been lost in the system, and up to no good. Now he is another up and coming Jamaican fast man and an Olympic hopeful.

Tomorrow we are off to boys and girls champs to see the future of Jamaican track and field.