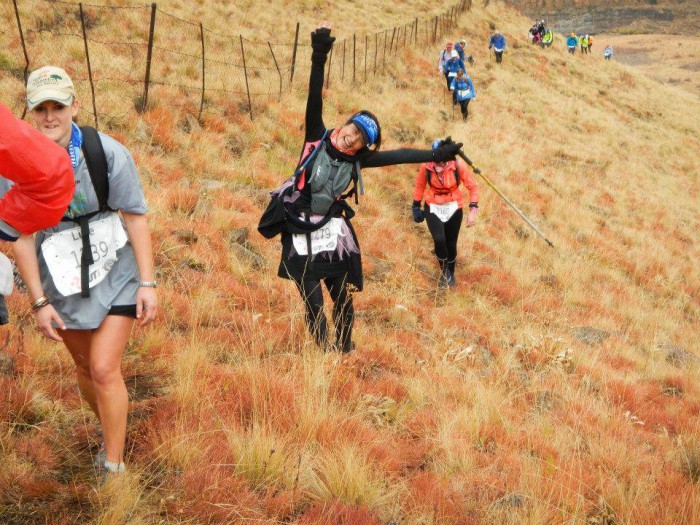 When it comes to getting the most out of races and just enjoying being out there, few runners do it better than Caroline Lee, who seemingly has a camera glued to her right hand. – BY SEAN FALCONER

It is unlikely that Caroline Lee will ever run another personal best in a South African race. Even a fast time is improbable, because this 51-year-old anaesthetist from Johannesburg chats to everybody in races, from fellow runners through race volunteers to spectators, and takes hundreds of pics as well. “I’ve made so many friends along the way and now everybody wants to chat, even when I come down to Cape Town, and all my PBs were run overseas, including 4:00:24 in the Munich Marathon in Germany. One of my running goals is a sub-four marathon, so I was close. Then again, I did take 360 pics along the way that day,” she laughs. “I usually take a few hundred pics per race, and do about 60 races a year – some trail events I took over 1000 pics! So I have many great memories.”

What’s Up, Doc?
Caroline (51) was born in Taiwan, then moved to Africa aged 13 when her diplomat father was transferred and the family spent two years each in Lesotho and Swaziland before moving to SA. She matriculated in Bloemfontein, then studied medicine at WITS in Johannesburg, specialising to become an anaesthetist. Today she is divorced with two sons, aged 20 and 15, and operates out of various hospitals in Joburg. She also has a reflux-testing unit at Donald Gordon Hospital, attached to WITS, and it was thanks to her medical training that she kind of ‘fell’ into running in 2007.

“I was not a runner at all, but a friend was worried her husband would collapse in the Valentine’s 10km night run, because he’d recently had Achilles tendon surgery, so she asked me to run with him and keep an eye on him. We finished in 1:09 and I quite enjoyed it, and when I saw the Morningside club tent at the finish, I decided to join them. My second race, still with no training, was the Two Oceans 21, which I only ran because friends had invited me down to Cape Town for Easter. At the finish all the spectators were banging on the sideboards, so I thought I was about to miss the cut-off and I sprinted home, only to see my finishing time was 2:00:10, way under the cut-off!”

Later in the year she was hit by a truck while training for the 94.7 cycling event, so was out of action for about a year, and then in early 2009 she was involved in a car accident, but by the end of that year she was able to run two half marathons in one weekend. “The Club Captain said if I can do two 21s in one weekend, I can do a marathon, so they invited me to go with to the Kaapsehoop Marathon. I ran the first half in two hours, then walked the whole second half – couldn’t run another step – but I finished in 4:57 and qualified for Comrades. It had been a dream of mine since 16 to run the Comrades, so it only took me 30 years to fulfil, but I got my medal. Of course, I said never again, but the club told me I would not only get a second Comrades medal, but a third medal for running them back to back – and I do love my medals!”

Say Cheese!
Meanwhile Caroline had also started running overseas marathons. In 2010 she went to Amsterdam, then New York in 2011, and Berlin in 2012. “I just couldn’t resist running, and I wanted to see the world, so the two went together naturally for me. The problem was, I ran Amsterdam and couldn’t’ remember anything of the route afterwards, so in New York I carried my camera and took about 10 pics. I realised it was quite easy to run with a camera, and that’s how I became a running photographer.”

However, she doesn’t need photographs to remember her experience at the 2013 Boston Marathon. That was the year that two bombs went off right near the finish line, killing three spectators and injuring an estimated 260, and the race was immediately called off as emergency services flooded the area. “I was just 600m from the end when they went off,” says Caroline. “I heard the first one go off and thought it was a 4:00 cut-off gun, but then a second one went off 30 seconds later, so I asked a guy next to me what it was and he said he thought it was probably a cannon being fired to celebrate Patriot’s Day. Then a policeman ran in front of us and stopped us. Everybody just stopped dead, nobody tried to go past, and we stood there for close on two hours, in two degree temperatures, not knowing what was going on and still hoping to be allowed to finish. They just said there had been an incident at the finish.”

“The worst was for the runners around me, many of whom had family waiting for them at the finish line, so there was huge panic amongst the runners. By the time I got back to the hotel, it was already dark, and then I realised people back home had been panicking about me, because they had been tracking me online and my running time had me down as finishing in 4:09, the exact time the bombs went off! However, the race is run mat-to-mat with chip timing, and I was actually a little bit further back after only crossing the line a bit after the starting gun. It was a frightening experience.” But that didn’t stop Caroline going back in 2014, when the organisers invited some 5000 non-finishers from the previous year to come back and run it again, without needing to meet the normal strict qualification criteria. “They did give us a medal in 2013, but I went back and finished the race officially.”

Busy Year Ahead
Today Caroline can look back on over 8000km in race mileage, including 10 marathons in 2010, 11 in 2011, 12 in 2012 and 16 in 2013! “Ok I went a bit overboard in 2013, but not bad for somebody that does no training at all because I have no time in the week to run. My races are my training runs, and if you do two marathons in one weekend, I think that is enough for the week!” She has the Tokyo Marathon this March and will then run Comrades again later in the year, followed by the Frankfurt Marathon in October. Of course, her camera will go with to all these events…

She also has some long trail runs pencilled in. “I’ve done most of the long trail events, including the Outeniqua Quest, Cederberg Challenge, and the Mutter in the Drakensberg, but there are others I still want to do, like Blade Canyon, and the AfricanX is on my bucket list – when I can find somebody slow enough to run at my pace, and who doesn’t mind stopping for me to take hundreds of pics!”