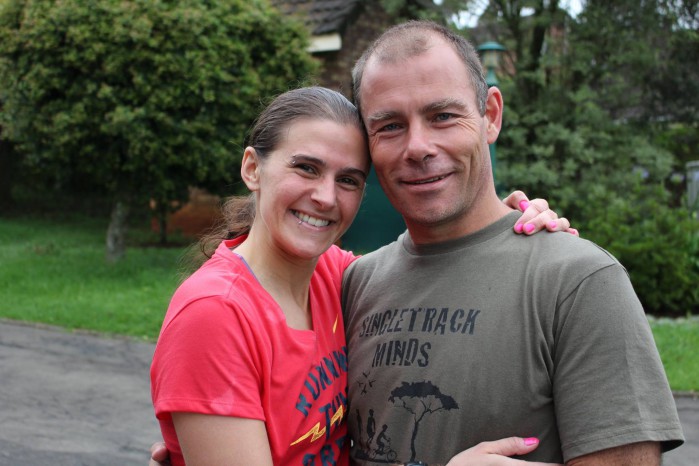 Running has always meant a lot to me, so when I met the man of my dreams through running and we could share running as well, it made me so incredibly happy. – BY NANDI ZALOUMIS-MITCHELL

My running is my closest friend, my counsellor and my confidante. Running is who I turn to in dark times, and also in times of joy. I am running, and it is me. That’s because running saved me when I was a teen suffering the depths of despair as an anorexic. It was my freedom to just be me. Running never judged me. As I grew stronger and was able to gain control over the anorexia, my running remained a vital part of my recovery, and to this day is a constant in my world.

I know that I run faster than my daily challenges and problems, because after a run it takes them a while to catch up to me. I am also inspired by the strong women at the sharp end of the field who do not make excuses in times of adversity and when training is difficult. They simply find a way to get out and make the sacrifices necessary to be a top runner. That motivates me to run 80 to 90km per week, enjoying both trail and road running, and I have now run the Comrades Marathon on two occasions, clocking a 10:19 in 2014 and an 8:40 in 2015. I have also run the Maritzburg Marathon and the Mandela Day Marathon, and I traditionally do a New Year’s long run as well, and this year I did 65km.

Best Running Shoes Ever!
I met my love through running and we were married in October. Jody has also run the Comrades, and he knows how much running means to me. That even inspired his proposal. We went into the Nike Store at Gateway Mall and there was a surprise waiting for me: A pair of customised shoes, with the words “I Love” on the right shoe and “Nandi” on the other, along with a stunning diamond ring tied to the laces. He proposed to me right there in the store!

Our shared love of running is amazing, as it gives us the opportunity to share our sport and be the best partners we can be to each other. We start our day together with a 4am run, and on most afternoons we also run a few kilometres on the trails together. Our world would not be the same without running, and I know that running will still take us on many adventures together, and that we are going to see amazing places, share special moments and meet new friends along the way.

No Horsing Around
We were married in October, which turned into quite an adventure in itself. We planned a Saturday morning 5:30am sunrise ceremony on Mpate Mountain just outside Dundee, where we run each morning, thinking it would be the perfect time and place to share with our family and friends, some of whom flew out from the States and Australia for the wedding. Then on the Friday afternoon I was washing my one horse when he kicked me, shattering my arm in four places and dislocating my elbow. I was rushed to Newcastle for emergency surgery and the doctors told us to reconsider the wedding, as I would only be released the next morning.

So we phoned around to postpone the ceremony, and when I was discharged at 7:30am, we still had the reception at 9:30, which carried on through the day, and then we had the wedding ceremony on the Sunday at 5:30am. I had planned it as a weekend away for many of the guests, including an early morning run on Sunday, so luckily quite a few could stay for the ceremony. It was simple, no chairs, misty conditions on the mountain, my mother played the flute for my wedding entrance, and it all went well, but I have to be honest, I don’t remember that much due to the morphine I was on for the pain!

Stronger Than Ever
Two weeks later I started running again, against the doctor’s wishes – they ended up replacing my cast twice due to it stinking so much from sweat – and funnily enough, I ran my fastest marathon in training just after that, so two weeks off did me the world of good! Now my goal is to get my marathon time under three hours, and after that I want to get as close to a silver medal as I can at Comrades.