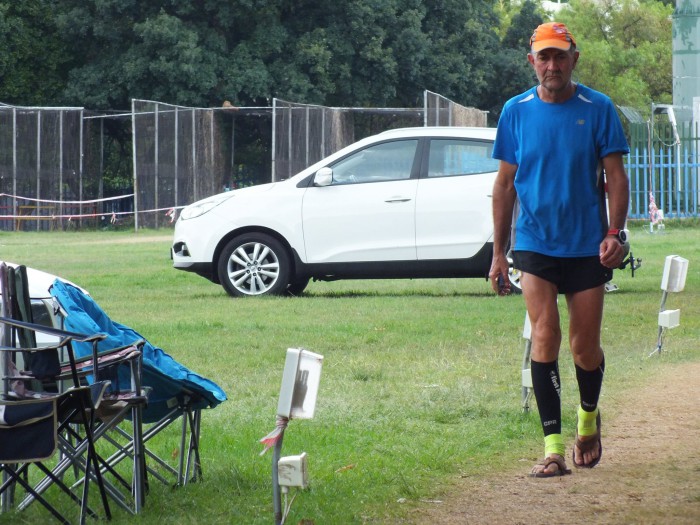 It takes a special type of runner to enter a six-day circuit race over New Year’s. It takes an even more special runner to enter as part of a two-man combo who pledge to run 800km between them to raise funds for refugees in war-torn Sudan, and then sprint the last few hours on a strained calf muscles to fulfil that pledge. Anthony Bold, take a bow. – BY SEAN FALCONER

The annual Festival of Running in Johannesburg attracts a motley crew of long distance junkies who camp out for between two and six days to run or walk repeatedly around a 500m circuit. It’s definitely not everybody’s cup of tea, but those who do it love both the physical and mental challenge. One of these distance junkies is Anthony Bold, a 16-time Comrades finisher, who was doing the six-day event for the third time this past New Year’s. In his first in 2012-2013, he completed 405km before his feet packed up, and a year later he managed 420km before swallowing a bee and being forced to retire. “This time I planned to do an easy 500km, with Stefan Roodt doing the other 300km of our combined 800km to raise funds for the S4J – Sudan for Jesus organisation, but people were teasing me that he was not going around the track that fast, so I would have to make up the difference.”

Foot Problems
Besides regular rest breaks, Ant’s strategy was to change his socks every four hours to keep his feet dry and intact, but blisters still formed on his heels and toes. By day three the blisters were so bad that podiatrist and running friend Dennis Rehbock visited to drain and treat them with spirits, but by then Ant says his feet were too sore to put shoes on, so he began running in just socks. “I was running in seven pairs at one stage, to still give my feet at least some cushioning, but after a few hours of that my heels were badly bruised. Then at midday we hit upon the solution to cut the toe boxes off my shoes, like the old Bruce Fordyce way. It doesn’t affect the shoes at all, and it’s actually very comfy. After that the blisters didn’t worry me nearly as much.”

So Ant continued running, and on the fifth afternoon, with some 20 hours still to go, he hit his target of 500km. That’s when another running friend, Stuart Wainwright, suggested he push on to 563km, which equals 350 miles, traditionally a notable mark for circuit runners. “I decided to keep going, but in the early evening shift I strained my calf muscle, so I pulled off and moped in bed. I came out twice during the night to try again, but no luck, and it was only at 4:30am that I could at last hobble around a bit, but ridiculously slowly. I still had about 40 kays to go and Stefan was struggling to finish his kays, so I thought I actually had to keep going for us to make 800.”

“Then organiser Eric Wright got Johnny van der Walt to chase me after we packed ice into my compression sock, and I started running. Problem was, nobody seemed to know how many laps I still needed, and at one point I actually stopped and cried, said I can’t go on, but I got going again after some words of encouragement from Norman Johnson of S4J. Just before the final cut-off at 12pm, I was told I had three minutes to do my last lap to make 563km, so I sprinted it, made it by 20 seconds, and then I just collapsed. That was when they finally told me that collectively Stefan and I had passed 800km half an hour earlier, but they didn’t want to tell me because I was so close to my 563km target!

Tough Enough
Unsurprisingly, Ant says his body was “broken” after six days of running, and that he had to walk around the office without shoes for a number of days. “My colleagues definitely think I am a bit weird, or possessed,” he jokes. “You just can’t compare six-day circuit racing to anything else. I went through hell, and it was one of the toughest things I have ever done. But you get to know yourself, and what your limits are. You learn to vasbyt.”