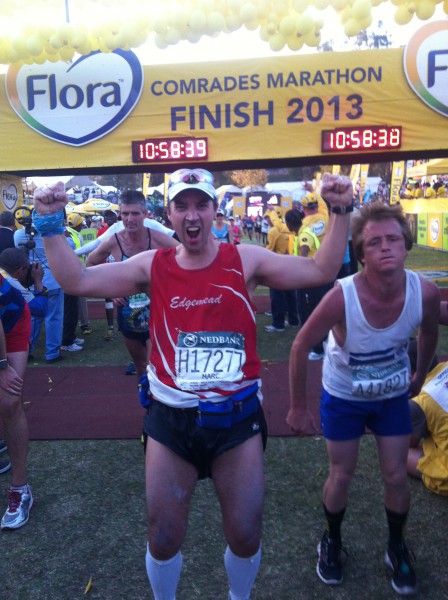 There is a finishline pic of me in my first Comrade Marathon in 2013, wearing my H seeding number and looking elated with my sub-11 finishing time, while the runner next to me, wearing an A seeding number, looks exhausted and ready to collapse. However, 20 minutes later I was not feeling so well. What I did that day is quite embarrassing, but at the time, I never thought there would be any negative consequences… – BY MARC BESTER

I had trained very hard that year and just prior to Comrades I had done the Two Oceans Ultra, IRONMAN 70.3 and the Full IRONMAN, plus three more marathons and various triathlons and long trail events. I was fit and ready. Now I had always followed the rules of not eating or drinking anything new, nor using any supplements on the day, that you had not used throughout your training. Like many runners, I had usually suffered with severe cramps, which I always thought was due to dehydration, but I had never taken more than cramp-blockers in a race. However, I was very worried with Comrades, especially when I heard it was going to be very hot and windy, so I had asked around all my running mates and on the Comrades Facebook page what medication to take if in serious pain.

Mostly I was told just be a man and run though it, that’s what Comrades is all about. I was also told by someone that if I feel the pain coming along, “just pop two myprodols.” It was not until two days before the race that I decided to take Myprodols along, just in case, having only ever used them when I had a serious back strain or various sports injuries, and I only recall ever using two at a time. Well, I conveniently packed a strip of them – for me and any runner who might also want, of course. I didn’t even research the pill, and was not worried that it could cause me damage or be harmful. I just didn’t think I was doing anything wrong…

Runner’s High?
Well, I had a great race. I suffered like everyone else with heat and dehydration, but from the start I thought I could pop two pills every two hours or so, just to keep the pain away. To be honest, I felt no negative effects. I ran the entire race to my exact goal, finishing under 11 hours, and I never had any cramps at all. Every two hours I just took two more and stayed hydrated. I’m not sure if I was supposed to have experienced anything negative, but I got to the end totally elated. I was probably high, as I had taken 12 pills along the route!

After finishing I sat for about 20 minutes with friends and then started to feel weak and dizzy. I tried to get up but fainted, and I was taken to the medical tent and placed on a drip. The tent was overflowing with runners and I was shocked to see the carnage of the day. As the doctor came to me, she said “Mr Bester, you are severely dehydrated and need a drip, so I need to ask you some medical questions. Firstly, have you had any Myprodols?” Immediately the alarm bells rung in my head. I stuttered and mumbled yes, that I had in fact had four. Big lie! She shrieked and scolded me, telling me I was crazy, and didn’t I know the side-effects and the possibility of renal failure, and how the meds block the body from pain even though I pushed my body to its capacity. I lay there for probably 45 minutes thinking I was very lucky to still be ok. I really did not want to expose how many I actually had and then be hauled off to hospital for a stomach pump!

Lesson Learnt
Fortunately, I never had any negative side-effects, but since then I never touched Myprodols again, including during two more Comrades runs. I do think runners should be wary of what anti-inflammatories are used for, and should not push their bodies to a point that they need meds to get to a goal or a finish line. I’ve heard horror stories of long-term damage caused by lesser meds used by runners, and I’m really glad my story turned out ok, and that I lived to run another day.

Ed’s Note: This article is not meant as criticism of any specific medication, but rather to warn athletes to use all medication carefully, and only with instruction from a properly qualified medical professional.