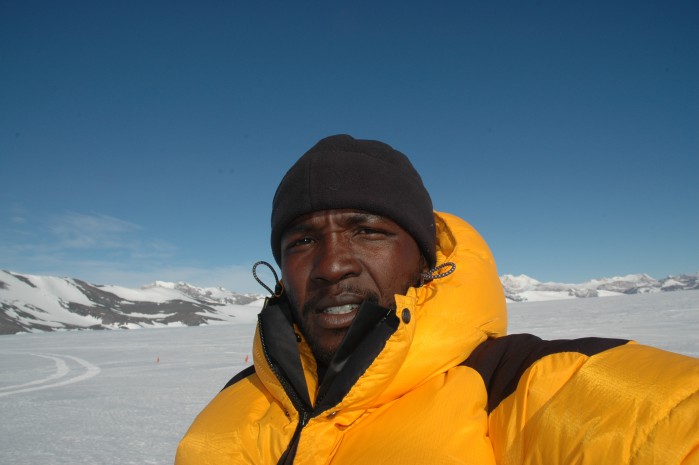 He has conquered the world’s highest mountains and trekked to the most extreme locations in the Arctic and Antarctic, but now Sibusiso Vilane has been challenged to do something he’s never done before, his first triathlon later this year, with the help of the Modern Athlete Dare to Tri programme. – BY RAYMOND TRAVERS

This former goat herder is the only black South African to complete the Grand Slam of adventuring, the Three Poles Challenge, to reach both Poles and climb Mount Everest, which he completed in 2012, and he has even met Queen Elizabeth II, but there is one thing he cannot do: Swim.

It was in a 2013 television advert for Windhoek Lager that he revealed this fact about himself. “Yes,” he commented in the advert, “this is not a joke. I cannot swim. But I am prepared to learn, as I never back down from a challenge.” And it was this fact about Sibusiso that prompted the challenge that will see this Nelspruit resident tackling his first IRONMAN event in 2017.

But unlike many other athletes that are ‘challenged’ in this way and just dive straight in, if you’ll excuse the pun, Sibusiso is planning his attempt with a little more care. “I believe in proper planning, preparation and execution for the attainment of anticipated results,” he says, “so in this case one has to be realistic. Ideally I’d prefer to plan for my first ever ultra-distance triathlon to take place in 2017, simply because I need enough time to learn how to swim – and swim very well.”

Nevertheless, Sibusiso has chosen the South African leg of the ITU World Triathlon Series, the Discovery World Triathlon Cape Town, over the 23rd and 24th of April 2016 as his baptism of fire for multisport events. He will take part in the Sprint distance event, which consists of a 500-metre swim, 20-kilometre cycle and five-kilometre run, to build his confidence and knowledge about tackling multisport races before trying out a long distance IRONMAN.

Sibusiso seems confident about the cycling and running legs of the triathlon. “I’ll need to get a good road bike,” says the adventurer, who has done plenty of mountain biking, so he is used to pedalling, “and I will need to train hard, but it will be up to me how much training I commit to. I know what the challenge will require of me and I am ready to take it up. I do not take it for granted, and I never bring the ‘I-have-done-this-and-that’ attitude. I respect every challenge that I undertake.”

Running is actually Sibusiso’s strong point. “I run for exercise and always take part in a number of marathons and even ultra-marathons each year. Running is not my concern,” he says confidently, “and that is one aspect of the Discovery World Triathlon Cape Town that I will not even worry about. My only concern for the whole thing will be the swimming part,” he confirmed.

Sibusiso has now been appointed a brand ambassador for the Modern Athlete Dare to Tri programme that will prepare him for the Discovery World Triathlon Cape Town. “I accept brand ambassador roles simply to inspire others to understand and become involved with that particular organisation or programme,” he says. “I will be honoured if I am one of the people who will be the figure to look up to, and it is a great opportunity to be asked to fulfil such a role.”

So, once he learns to swim, Sibusiso will no doubt rise to this challenge, just as he was able to rise to the challenge of climbing Mount Everest – a challenge that ironically was also issued to him by a friend. “And I took that challenge and pushed myself to the top,” he concludes.

Sibusiso will be part of Modern Athlete’s Dare to Tri Programme, and you can join him on his journey from non-swimming novice to triathlon finisher.