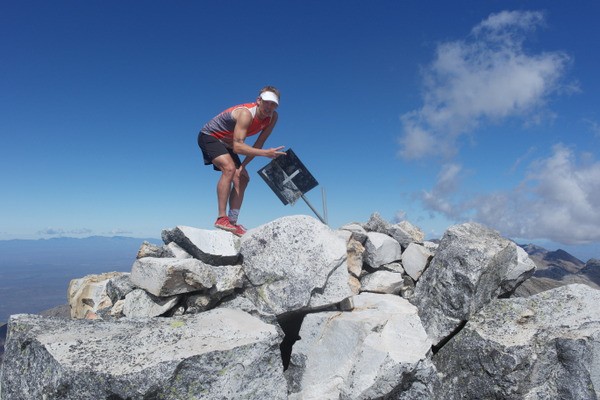 One of those philosophical questions people like to ask each other is, mountains or sea, which do you prefer? One person who would undoubtedly choose the mountains would be Jacques von Wielligh, who has a burning passion for visiting high places, preferably by running up to them. – BY SEAN FALCONER

By day he works in IT in the tourism industry, but give Jacques half a chance and he will don his running gear and head for the nearest mountain. The 39-year-old husband and father of two from Kuilsriver in the Cape simply loves getting to the top of high places, and he is currently ‘collecting’ trigonometric beacons by running to them and photographing them, in what he calls his 100 Trig Beacons Challenge – and that is just a logical extension of his other great adventure, the Nine Peaks Challenge.

Jacques excelled at rugby at school and also did athletics, clocking a PB of 2:03 for 800m, but after school he made a name for himself in road cycling, winning the prestigious Die Burger Sanlam Tour in 1997 and earning himself a pro contract to ride in Belgium. However, he soon became disillusioned with cycling: “I was heading towards a serious career in the sport, dreaming of riding the Tour de France, but I saw other riders taking EPO right in front of me, and that put me off, because I was not prepared to cheat. So I came home, and I haven’t owned a bicycle since. Then I saw an interview by Ryan Sandes about running the 4 Deserts Challenge, and seeing the places he was getting to visit made me also want to get out there. Back then, even running 10km was an achievement for me, but now I run up to 150km at a time, and I’ve seen some incredible places, so I’m very grateful to Ryan – if not for him, I would not have gone out there.”

Accepting the Challenge
About two years ago Jacques read online about a challenge to run the highest peak in each of the nine provinces of South Africa, which would entail a total elevation gain of 10,300m, but after doing some research he realised there was very little info available for some of the peaks. “I wanted to go map out routes for others to summit, because I never just do things for myself. I had just run a sub-five-hour Two Oceans, so I was fit, and I am quite computer-savvy thanks to my work, so I pulled out Google Earth, plotted the routes, exported the files to my GPS device and then took my cycling mate Nigel Isaacs with me for support and followed the little arrows to the highest summit of each peak.”

Typically, Jacques is understating the magnitude of the trip. They started in the Limpopo Province and in just under two weeks he and Nigel worked their way down to finish in the Cape, with Nigel summiting some of the easier peaks alongside Jacques, and him doing the rest solo. First up was Iron Crown (2126m), then Die Berg (2331m) in Mpumalanga. “Die Berg is not difficult to get up to, because there is a tar road all the way to the summit, but I mapped out an off-road route where there is so much more to see, including animals, rivers, pools, a waterfall… If you don’t go my route, all you see is the road.” Next was Nooitgedacht Wes (1806m) in the North West, which Jacques describes as a sacred place. “It’s a mountain sanctuary park, and we ran up a river gorge system, where I incidentally lost my wedding ring, did a circle route on the other side, then came back down through the gorge. Absolutely stunning!”

The fourth peak was Toringkop (1913m) in Gauteng, where no running is actually allowed. “It’s not really a summit, just the highest point, and we found a note left on our vehicle to call the officials, because we had been spotted running on the hiking trail.” Then it was on to Namahadi (3275m) in the Free State, and Jacques says the adventure really started here. “If I could recommend one place in South Africa to run, this would be it. It’s so beautiful there, on the border with Lesotho, and the Mont-Aux-Sources trail race is run on the same route. Some people think Monties is the highest point, but you actually have to go quite a bit further to get to Namahadi, although it is actually just a few metres higher. You park at Sentinel Parking Point, go up the chain ladders, and what an amazing view!”

From there they headed to KwaZulu-Natal for Mafadi (3451m), the highest point in SA in the Drakensberg. “We went up Leslie’s Pass, past the natural marble baths, into the snow. You can’t really run there, it’s more like crawling as you follow the Lesotho border, but there’s a cave up there where you can overnight and then watch a stunning sunrise the next day.” Next was KwaDuma (3019m) in the Eastern Cape, where they stayed overnight in a local village, having handed out food and other goods, before heading up the peak. “That was something special, untouched beauty, with wild horses running free up on the escarpment,” says Jacques.

It was a quick 10km summit to Murch Point (2156m) in the Northern Cape, but also a hair-raising one. “There was mist over the Kompas Berge mountains, so I could not see the view, and then suddenly lightning struck the ground less than 300m away as I came down, so I ran very fast to get to the car. It was very frightening!” And that left Seweweekspoort (2325m) in the Swartberge, about 60km from Laingsburg in the Western Cape. “Nigel tried to go up with me and didn’t make it, because my route was too rocky with dense bushes, so I went back later with a foreign running mate, Frenchie, who is a real trail runner, and we found a better route.”

Passing on the Info
Jacques says the round trip can be done as an active 12-day holiday, if you’re fit, but he warns that some of the summits involve a long trek, and for some you need to go equipped with a tent and emergency gear. “Being in the tourism industry, I can take people on the tour, or can arrange a tour bus, accommodation and tour guides, which will make it a nice experience. There are also so many things to see along the way, including some 200 caves to explore on the various peaks. That’s what makes me tick. It’s all about exploring, experiencing amazing journeys and discovering new things. The mountains were there long before us, and will be there long after us, and I find peace and freedom up there. It is mind-blowing to reach a summit, and if you can share a mountain with somebody, the memory will last a lifetime. That is what motivates my running now, not competing against the clock or other runners. If I could relive my life, I would touch the top of a mountain every day.”

To read the full story of the 9 Peaks adventure, go to http://issuu.com/jacquesvonwielligh/docs/the_9_peaks_experience.